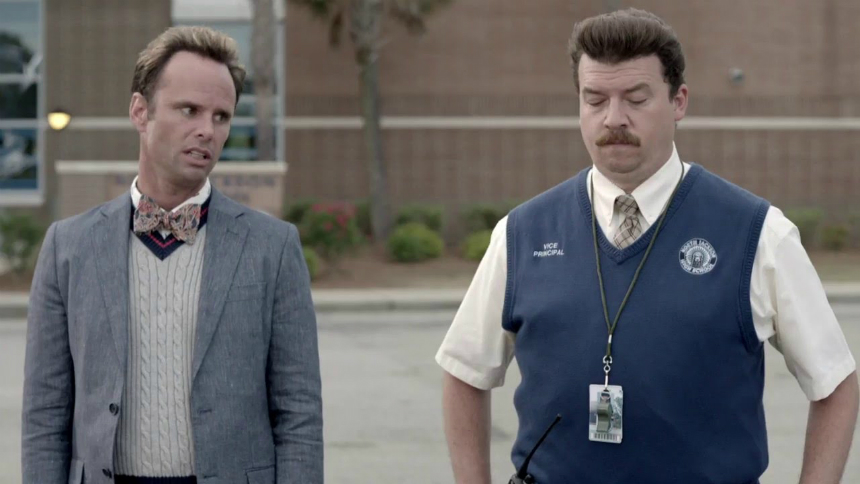 David Gordon Green directed the series finales of both HBO's Vice Principals and Amazon's Red Oaks, as well as the recent theatrical feature Stronger, thus reinforcing the notion that he refuses to be pinned down as a director. That may be the best preparation possible for his upcoming new version of Halloween.

He has made features that are all over the map, starting with the delicately-crafted George Washington (2000), the relatively rambunctious All the Real Girls (2003), and then the impressive Undertow (2004) and Snow Angels (2007). His next three films, the comic trio of Pineapple Express (2008), Your Highness (2011), and, particularly, The Sitter (2011), felt like colossal wastes of his talent at the time.

In retrospect, and considering the films and TV shows he's made since then, I realize that's simply a reflection of my own tastes. Because none of his comic projects have struck my personal funny bone, I've tended to disdain them. So his work on Eastbound & Down and Vice Principals has held little appeal to me, much as his previous feature comedies have failed to resonate -- they strike me, not just as dark vehicles for comedy, but as glorifications of mean and nasty people.

Comedy, obvious, has to be considered on a sliding scale. I've sat in a packed theater and wondered why everyone else was laughing at something I didn't find amusing in the least. Contrari-wise, I've sometimes been the only one laughing in a theater. Everyone's taste is tuned differently, and I think that's manifested most obviouisly with comedies.

In the case of David Gordon Green, I've enjoyed recent dramatic features he's made, like Prince Avalanche, Joe, and Manglehorn. (Our Brand Is Crisis was a mixed bag.) I generally enjoyed the nostalgic vibe of Red Oaks. Obviously, his involvement in all these projects has differed; how many of them are personal to him and how many are jobs-for-hire?

Whatever the case, I think it's clear that he's proven himself capable of delivering films or television shows on time and on budget, otherwise it's hard to believe he'd keeping on working at the rate he's going. Watching Vice Principals last night, which resembles a bull in a china shop, I was most impressed with how different it was in tone from Red Oaks, a sweetly nostalgic show that nonetheless feels as authentic to its characters as the more brazenly stubborn people in Vice Principals.

Good directors must be intelligent people who can (literally) think outside of the box, else they'll never be able to film a scene to anyone's satisfaction. I imagine it's like juggling a picture of a dictionary in your head while also alphabetizing all the words on the fly. David Gordon Green is not my favorite director, but my admiration for his talents is high, and I'll be very curious to see what new facets of his imagination will be unleashed when he and Danny McBride team up again on the new Halloween.

Do you feel this content is inappropriate or infringes upon your rights? Click here to report it, or see our DMCA policy.
David Gordon GreenRed OaksVice Principals