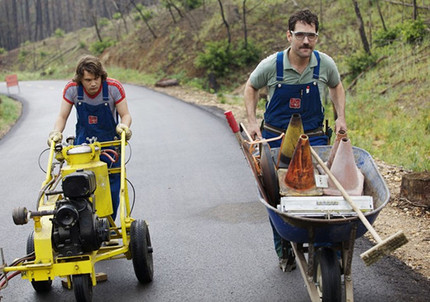 Many reviews of Your Highness and The Sitter, two of the more pitiful comedies of 2011, featured concerned inquiries as to what (and in some cases what THE HELL) had happened to those films' director, David Gordon Green.

His first four features -- George Washington (2000), All the Real Girls (2003), Undertow (2004), and Snow Angels (2007) -- had been darlings of the indie world, methodical and sensitive stories of ordinary small-town folk. No one begrudged Green his Pineapple Express (2008) because it was funny, and because they assumed he'd eventually get back to the deeper stuff. But that one-two punch in 2011 had people examining Green's head for lobotomy scars.

His seventh film, Prince Avalanche, isn't quite a "return to form" (to use an expression only movie critics use), but it is a satisfying step in that direction, a lovely, melancholy little film about loneliness and self-discovery. Except not as unbearable as that sounds. It's actually rather light! Paul Rudd's in it!

A loose remake of an Icelandic film (Either Way), Prince Avalanche stars Rudd and Emile Hirsch as workers on a Texas road crew in 1988, repainting lines and replacing sign posts on rural routes after the devastating wildfire that occurred a year earlier. It's a solitary job: Monday through Friday, Alvin (Rudd) and Lance (Hirsch) are essentially alone, interacting with no one but each other until the weekend comes and they can go home if they choose to. 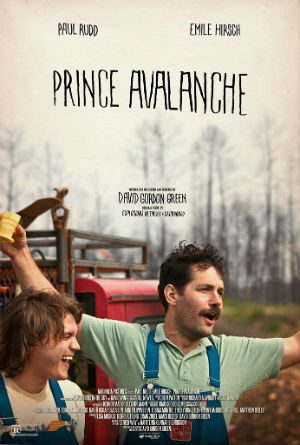 And with that I have conveyed the bulk of the plot. With only two other speaking roles -- a gregarious and booze-loving truck driver (Lance LeGault) and an old woman (Joyce Payne) whose house was lost in the fire -- the focus is squarely on Alvin and Lance. Rudd and Hirsch are up to the challenge, creating believable characters composed of personalities rather than just quirks, and taking us through the stages of their gradually deepening relationship. Alvin thinks Lance is a reckless kid; Lance views Alvin as a boring, fussy grown-up; they both ridicule -- and envy -- what the other has. When their personal crises develop (offscreen), their fragile new bond is tested.

I don't know what the actual process was, but this feels like the sort of intimate, small-scale film where the director had the actors live together for a few weeks before shooting began. Rudd and Hirsch seem comfortable with one another, their different skills meshing into a likable duo. Green's regular cinematographer, Tim Orr, captures many gorgeous, placid images of the natural surroundings, making this the first Green film in six years to qualify as "beautiful."

It's funny, too. And when it isn't funny, at least it isn't too heavy. Maybe this is a lingering effect from Green's last few endeavors -- and not an unwelcome one, either. His earlier movies always had some humor in them, but you wouldn't describe any of them as "comedies," and some were downright Gothic in their darkness. Prince Avalanche isn't an all-out laff-fest, but it plays up the humor of Alvin and Lance's odd-couple roommate (tent-mate) situation with a gentle touch.

On the David Gordon Green scale of 1 to 10, with 1 being Pineapple Express and 10 being Snow Angels, Prince Avalanche is about a 6 -- more drama than comedy, but more light than dark. Such a film runs the risk of feeling unimportant or weightless, and certainly no one's going to make a case for this being Green's best work. But if nothing else, it's a reassuring reminder than the Green we used to know -- the contemplative, emotionally fraught one -- is still lurking in there somewhere.

Review originally published during the Sundance Film Festival in January 2013. Prince Avalanche opens in limited theatrical release in the U.S. on Friday, August 9, and will also be available to watch via various Video On Demand platforms. Visit the official site for more information.

Do you feel this content is inappropriate or infringes upon your rights? Click here to report it, or see our DMCA policy.
David Gordon GreenEmile HirschPaul RuddHafsteinn Gunnar SigurðssonLance LeGaultJoyce PayneComedyDrama