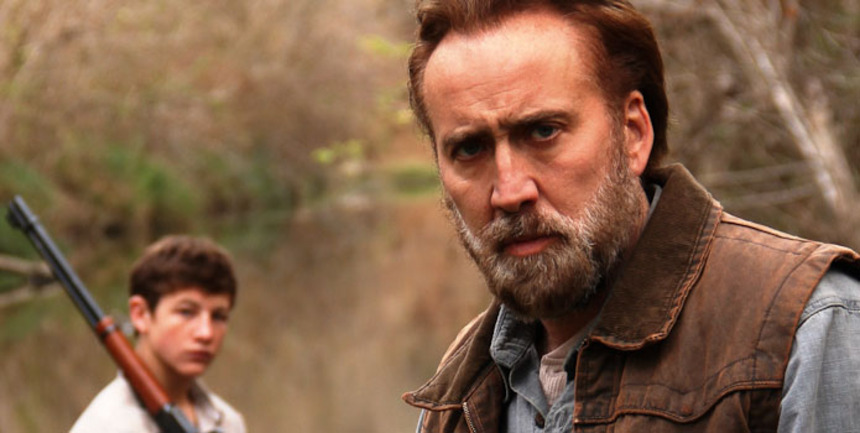 Nicolas Cage has enjoyed a varied career, to say the least. From big budget blockbusters to notable indies, many would call his decision making curious, if not downright bizarre. In a lot of ways, this echoes the directing choices of David Gordon Green, who started his career with well-respected artistic indies before moving on to pot-smoker comedies. In the drama Joe, these two iconoclasts come together to tell a searing story of a rural man just trying to do good. It's a brilliant film and a decision both men should be applauded for making.

The story opens with a young boy Gary (played by Mud's Tye Sheridan) giving a dressing down to his drunk drifter father over the man's irresponsibility. This obviously dysfunctional relationship makes the backbone for the film as 15-year-old Gary takes on more of the responsibility of providing for his mother and sister -- and less purposefully, his father's drinking habit as well. He does this by finding a job on a shrub clearing crew that is captained by the eponymous Joe. An ex-con with a troubled past and a penchant for making people want to hurt him, Joe is trying to turn things around in his life. But Joe's life just doesn't seem to be cooperating with these new plans.

Joe takes an immediate liking to the hard working Gary, but he's less than impressed when Gary's father Wade shows up to join the crew with a bad attitude and poor work ethic. Joe asks Gary and Wade not to come back, leading to further abuse from Gary's dad. Eventually Joe relents and allows just Gary back on (the old man would rather focus on his wine than his work, anyway) and a strong bond forms between Joe and the boy.

The relationship between Joe and Gary is the meat on the bone and it's a real joy to watch the two characters grow through each other. But Joe's past eventually catches up to him. Once it sweeps Gary and his family into the mix, some hard decisions have to be made about what it really means to turn the page.

Cage's title role of Joe is most likely his weightiest in years. While he doesn't have the psychoses of his characters in The Bad Lieutenant: Port of Call - New Orleans or Adaptation, he does have the challenge of portraying the severe moral conflicts racking Joe. Quite frankly, Cage knocks it out of the park. As does Sheridan -- who has quickly emerged as one of the brightest young stars in Hollywood today. Most of the other roles are non-professionals. Most notable is Wade, who is played by a local drifter named Gary Poulter. His stunning performance is overshadowed by the fact he died not long after completing the film. Green dedicated the film to his memory and it's a shame it will be the man's only credit.

Once touted as one of the most exciting indie directors, with Prince Avalanche and now Joe, David Gordon Green looks poised to reclaim that title. His portrayals of human emotion in the two films are amongst the most honest and interesting of the year. Like in Prince Avalanche and earlier films, Green again uses music brilliantly to accompany the journey. This, added to the wonderful performances and heart wrenching story, make Joe a drama that is not to be missed.