Review: OUR BRAND IS CRISIS, Politics In A Familiar Nutshell 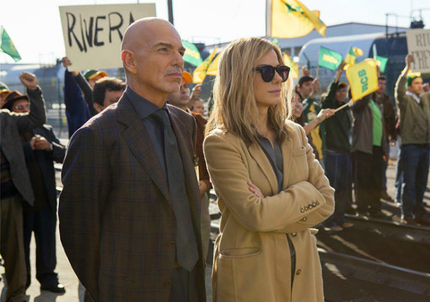 What an odd little beast!

Neither fish nor fowl, the highly-fictionalized Our Brand Is Crisis acknowledges that it was "suggested" by Rachel Boynton's same-titled 2005 documentary. That film, which I have not seen, revolved around two male political strategists -- James Carville was the better-known -- hired to run a presidential campaign in Bolivia.

This version, however, has been fashioned as a rickety star vehicle for Sandra Bullock as a notorious political operative known as 'Calamity Jane.' She is lured out of early retirement to redeem herself in Bolivia after crashing and burning; she lost too many elections in a row and fell victim to the twin addictions of alcohol and drugs.

Hired by campaign manager Ben (Anthony Mackie) at the recommendation of assistant manager Nell (Ann Dowd), Jane arrives in Bolivia and lounges around like a slug until she sees something in the candidate, Senator Castillo (Joaquim de Almeida). Castillo, a surly and charmless sort, formerly served as President and now wants to retake the office, for no apparent reason other than his desire for power. Jane, however, fixes on a certain unappealing aspect of his personality, gets excited, and rebuilds the campaign to transform his weakness into his greatest selling point.

Further motivation is provided by rival campaign strategist Pat Candy (Billy Bob Thornton, his head shaved as though to suggest he is playing James Carville -- see above -- without a Southern accent). Pat and Jane have tussled before, with Jane always coming out on the losing side, so that provides apparent motivation for her to defeat him, irregardless of the candidate he's supporting. Because Our Brand Is Crisis is a star vehicle, nearly everything is driven by Jane's weary cynicism. What's left over is driven by Bullock's desire to be likable -- she's physically clumsy once in a while, presumably so she can be more "relatable" -- and by her character's occasional cautious optimism, doled out in tiny moments.

As the star, she is the only experienced political operative allowed to hint at a suggestion of intermittent integrity. Everyone else is a sell-out, including the personable media expert Buckley (Scott McNairy) and whip-smart, negative-campaign expert LeBlanc (Zoe Kazan), or else a naive bumpkin, like Bolivian newbie Eddie (Reynaldo Pacheco), who is hopelessly idealistic.

The cynical whiff of the movie quickly becomes overwhelmingly noxious, relieved only by the well-telegraphed narrative turns crafted by the screenplay, credited to Peter Straughan. What makes it bearable are the touches from director David Gordon Green. He and editor Colin Patton, who have worked together for several years, give the story a somewhat off-kilter pace; even though there are too many montages for comfort, the film feels as though something important might be about to happen in sequences that are otherwise inconsequential.

The editing, along with comfortably worn photography by Tim Orr, a longtime collaborator, help to give Our Brand Is Crisis a different look and feel than other politically-themed movies of recent vintage. Those may be small favors, but they help to distinguish what would otherwise be a routine campaign in which the outcome is known well in advance.

The film opens wide in theaters throughout the U.S. and Canada on Friday, October 30.

Our Brand Is Crisis