Held in conjunction with the Night Visions film festival in Helsinki, Finland, the inaugural edition of Nordic Genre Industry Days presented panel discussions and pitch sessions for projects that are currently in development.

As might be imagined from the title, the sessions held on April 16 and 17 were targeted directly at filmmakers and industry professionals. But the discussions have broader implications as well, in that they cover topics that affect everyone who loves genre movies. After all, if you love horror, science fiction, fantasy, and/or action movies -- not to forget high-strung mystery and suspense thrillers -- then you're open to good genre movies irregardless of their country or countries of origin.

Read more about the event, including panel discussions on Nordic genre festivals, the challenges of distribution in the Nordic region, the current stage of crowdfunding, as well as a presentation on a new collaborative initiative, below. 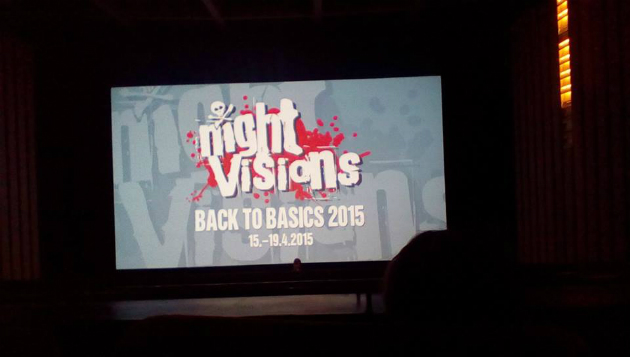 Panel Discussions: Making the Most Out of the Nordic Genre Festivals

With those broader points in mind, the event began with two panel discussions specific to the Nordic region. First up: "Making the Most Out of the Nordic Genre Festivals."

As one example of how Nordic festivals can give a boost to genre movies, Aromaa cited Dead Snow. Before screening at Night Visions, not many people in the region were talking about the movie. But the enthusiasm generated by the screening got people excited about its prospects beyond Scandinavia, which proved true.

Even more recently, Debot talked about Kevin Smith's Tusk, which opened at Monsters of Film Festival in Sweden. That was a case where their festival was sought out as a launching pad for the title. The New Zealand vampire mockumentary What We Do in the Shadows also did well there, as it has elsewhere.

Smaller specialty festivals also have the advantage of giving more attention to the films that they screen, since genre films can get lost if they're shown as part of a sidebar program at much larger festivals, where hundreds of titles may be showing.

The one caution is that some films may not be as successful in their native lands as they are in other countries; local audiences sometimes see little special about homegrown fare. That can also make it more challenging for the filmmakers. Again, however, genre festivals in the Nordic region can shine a light on films from nearby lands, perhaps encouraging home audiences to take another look. 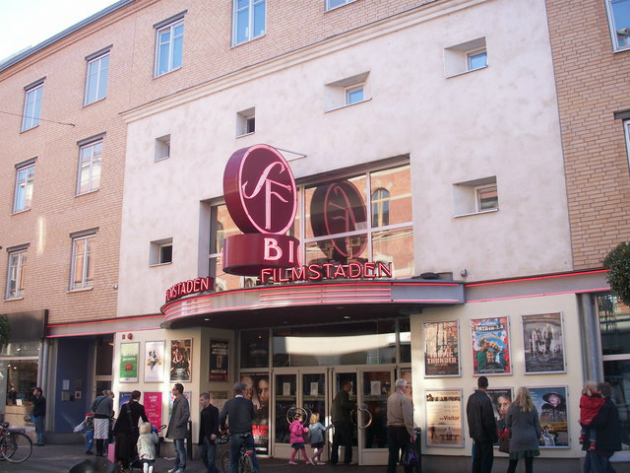 Panel: Why Isn't Genre Getting Around in the Nordics?

Another panel, "Why Isn't Genre Getting Around in the Nordics?," tackled the thorny issue of distribution for genre films.

The issues are well-known to genre fans in most parts of the world: as much as we may hear about a film, there's certainly no guarantee that it will gain theatrical distribution. Theater owners and distributors must, of necessity, prioritize the bottom line; if they don't think the movie will draw, there's no point in showing it theatrically.

The Nordic region poses additional challenges for distributors who want to maximize their potential revenue by acquiring home video rights along with theatrical deals. In Sweden, for example, newspaper listings may not -- by law -- include information about Video On Demand availability. So none of this "available tomorrow in theaters and VOD," as I'm accustomed to seeing in the U.S.; it's simply not permitted out of a desire to protect the theater owners.

Without that kind of support, people are not as generally aware of the option as they are in other countries. And, as elsewhere, the DVD market is steadily shrinking, which makes it more difficult for genre films to gain a foothold.

In Finland, the VOD market is almost non-existent. Finnish consumers are not accustomed to the idea of paying for individual movies on demand, according to a veteran festival programmer, and so relatively few support it. As a consequence, the DVD market is relatively stronger than in other countries, but it is slowly contracting as well. 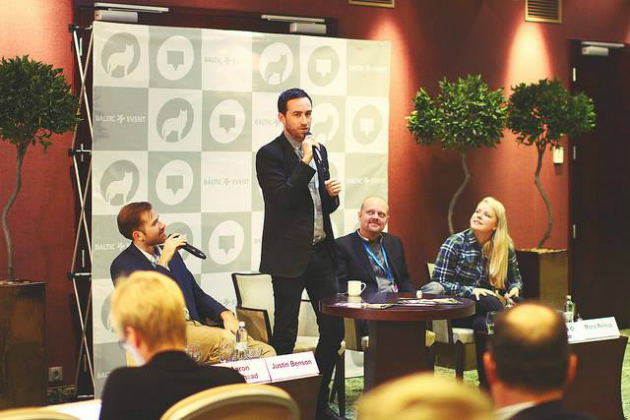 As reported on by Maria Reinup for ScreenAnarchy, the pilot program was held in Tallinn last November (pictured above: Spring directors Aaron Moorehead and Justin Benson, Alexandre Philippe, and Ms. Reinup). The idea is "to link the hottest up-and-coming European genre professionals - directors, producers, screenwriters, and post-production masterminds - with already established players in the European film landscape." The initiative is also intended to be progressive, so that a project in development might be pitched at one festival, given feedback and perhaps gain co-production partners, then move on to the next festival at a more advanced stage, where the process is not simply repeated, but enhanced with more cooperation and partnerships.

Every production needs to get financing, of course, but the thought is also to put the emphasis on the talents behind the production, to get them collaborating together with other talents on other productions, and then everyone can help each other to get their films made and seen. For film fans, this also holds out the hope that with more talents involved, the final product will be very much worth seeing.

The European Genre Forum will next be held as part of Fantastic Zegreb in Croatia; the festival starts on June 26 and runs through July 4.

The Nordic Genre Industry Days continued on a second day with a series of pitch sessions, as well as a panel discussion on crowdfunding.

Annick Mahnert (Screen Division, Paris) moderated, kicking things off by asking the panel members, all producers of films that had successful crowdfunding campaigns, for their perspectives. To what extent had the campaigns been successful? How much work was involved? What should filmmakers contemplating such campaigns know beforehand?

Bendik Heggen Strønstad (Thale and the upcoming Thale 2, among many others): Crowdfunding is a great way to create a fan base and start the marketing for the film. Far more work is involved than might be expected. You have to stay on top of the campaign on a daily basis. Most individuals only contribute when they are reminded, early and often. Funders tend to be hardcore fans, which is a big advantage since they are more likely to help with marketing the film as it nears release.

Michal Kosakowski (German Angst, the upcoming The Glow): Agree that crowdfunding is a lot of work, far beyond preparing and planning the campaign itself. It requires daily nurturing, to give the kind of personal attention expected and demanded by contributor (and potential contributors).

Social media itself is not a fundraising medium, although it draws attention to the crowdfunding. Events give momentum, something where more personal involvement is required. Crowdfunding campaigns are like having a baby that requires attention, care and feeding for 24 hours, every day, for weeks on end.

Tero Kaukomaa (Iron Sky, the upcoming Iron Sky: The Coming Race, and many others): As a veteran producer, he has been accustomed to the idea of crowdfunding long before it became popular; he has been selling merchandise related to his films for about 10 years. Nowadays, without crowdfunding, Iron Sky would not have happened. But crowdfunding is only one part of audience engagement.

Really, crowdfunding is marketing. It's an easy and cheap way to test market the film you want to make. If nobody responds to the campaign, maybe you should take another look at the film itself, or the way that you're presenting it. Perhaps the time is not right for it. Also, it's Important to stay in touch after the crowdfunding campaign concludes; it helps to identify your audience.

Do you feel this content is inappropriate or infringes upon your rights? Click here to report it, or see our DMCA policy.
crowdfundingdistributionEuropean Genre Forumfestivalsgenre festival