In 2012, Udo Kier appeared in Iron Sky as Wolfgang, the Führer of the Nazis, who – in the peculiar vision of Finnish director Timo Vuorensola – managed to survive after the end of WWII and traveled to the dark side of the Moon. Kier’s antagonistic character was, certainly, important, but in all fairness he didn’t have a lot of screen time back then, to the point that the Moon Führer gets killed in the middle of the story.

But the new and crazier Iron Sky: The Coming Race is here now and those who enjoy the always noteworthy presence of the cult German actor will be pleasantly surprised. In the sequel, set in 2047 (29 years after the events of Iron Sky), Kier is not only back as Wolfgang but also as none other than Adolf Hitler himself.

In a movie universe that is also adding reptilian aliens, dinosaurs that live in the center of the Earth and, among other weird stuff, a religious cult that see Steve Jobs as God, Udo Kier playing both Wolfgang and Adolf might just be the coolest fucking thing. With Iron Sky: The Coming Race now in theaters, On Demand and on Digital, here’s a brief chat about the film that I had with the great Udo Kier. 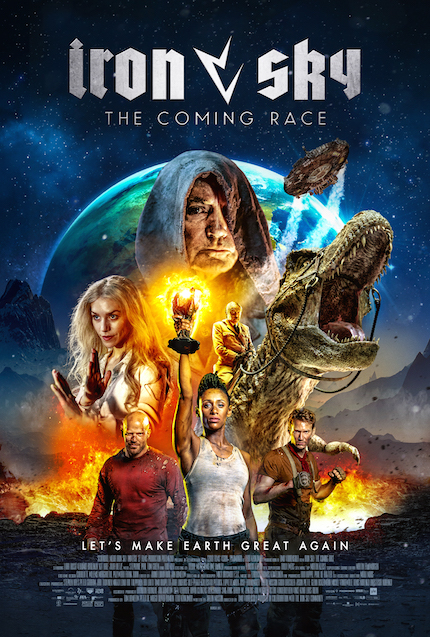 ScreenAnarchy: Going back to the first IRON SKY movie, how was the original approach of director Timo Vuorensola to convince you to portrait the Moon Führer?

Udo Kier: Well, he contacted me for the first one, he sent me the script, to play this leader of the Moon who’s trying to destroy America and all that.

I liked it because it was very well-written and secondly, it was also important because it did crowdfunding, which was something totally new; actually, the film was basically financed that way.

Because Iron Sky was a success, especially in Germany, they planned to do the second one, with a bigger budget: Iron Sky: The Coming Race.

I was supposed to play only the same character from the first one, then it came to the point that I said “who’s playing Adolf Hitler?” and then I played Adolf Hitler. Then of course the final thing: Adolf Hitler laying on a T-Rex, that was the highlight. That’s very technical, when you lay on a T-Rex they cannot just put you there, they have to put you on a kind of a moving train and you have to go to watch how the T-Rex moves, then you have to have that movement so it looks like you’re sitting on a T-Rex. It was a lot of fun.

The first one we shot in Australia, the second one in Belgium, and the new one in China, so that’s number three [The Ark: An Iron Sky Story]. I like to work with Timo, the first time that we worked together we became friends and that’s why, of course, I did the second and the third.

Your character Wolfgang is back from the dead basically, so did you know back then that he was this reptilian alien or when was this background added?

It was not planned to make a second a film. The second film is only made if the first one is a success. The first Iron Sky was a big success especially in Europe. I’m very happy that the film is now distributed in America. Technically, it is as good as any American big animated or whatever film. That is a good sign. And of course, I like the story because it’s unbelievable, with the T-Rex and all that. We had a good time shooting the movie. 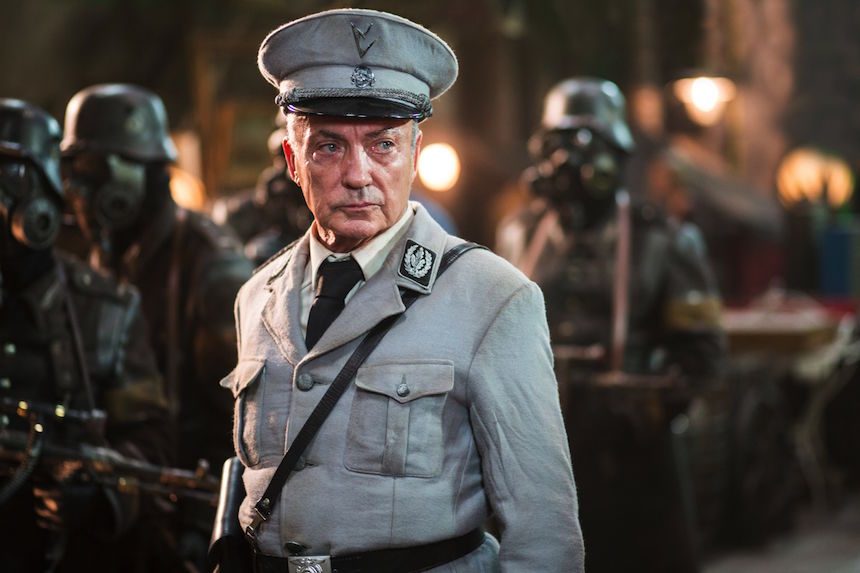 Even though this is a crazy and very funny film, were you hesitant to play Hitler?

I have never played Adolf Hitler in a kind of serious story, because I was born at the end of war [Kier was born October 14, 1944] and it was a horrible time. I’ve played him only in comedy. Then I have Charlie Chaplin always in my brain, his performance in The Great Dictator [a classic film that was actually featured in the first Iron Sky]. So I have only played Adolf Hitler a few times, in England and Germany, in comedies.

The film, as absurd as it is, also tackles some subjects that are very current, such as overpopulation, health problems and in general a crisis in every way. Why do you think genre cinema in particular is a great way to explore themes that are maybe more relevant?

First of all, films are made for entertainment. Iron Sky: The Coming Race is definitely entertainment that audiences want to see. I don’t think that there is a political message in that film. It’s not a documentary, it's just a very well done film.

In your unique and vast filmography, is Hitler on a T-Rex on the dark side of the Moon your most extravagant moment?

No, I wouldn’t go that far. I mean, as an actor when you play a vampire in Andy Warhol’s Dracula [aka Blood for Dracula] or in Blade, you know? I've worked with Lars von Trier for 25 years. I made a wonderful film, a Brazilian film with Kleber Mendonça Filho, which did win in Cannes a couple of weeks ago the Jury Prize [Bacurau]; that was also a special one. I mean, visualizing Adolf Hitler on a T-Rex, that is a very strong image, but I wouldn’t go as far, after 50 years of working in movies, that that would be the strongest image. It definitely is the most incredible one, because it’s so unrealistic. But yeah [laughs], I liked it.

I make movies and I’m a very lucky man that I meet people and they want to work with me. I have never asked a director, so I’m a lucky man! I grew up in Germany, met [Rainer Werner] Fassbinder, I met Lars von Trier, Gus Van Sant, I met these people and we like to talk to each other and then we made a movie together. With Timo is the same thing, we met, he offered me the Iron Sky number one and because of the success, we made number two with more technology, better and bigger. That’s how it is.

Do you feel this content is inappropriate or infringes upon your rights? Click here to report it, or see our DMCA policy.
BacurauBladeBlood for DraculaIron SkyIron Sky: The Coming RaceThe Ark: An Iron Sky StoryThe Great DictatorTimo VuorensolaUdo Kier

More about Iron Sky: The Ark