The Interview With All Directors Of GERMAN ANGST Continues! Marschall! Kosakowski! Buttgereit! Part 2! 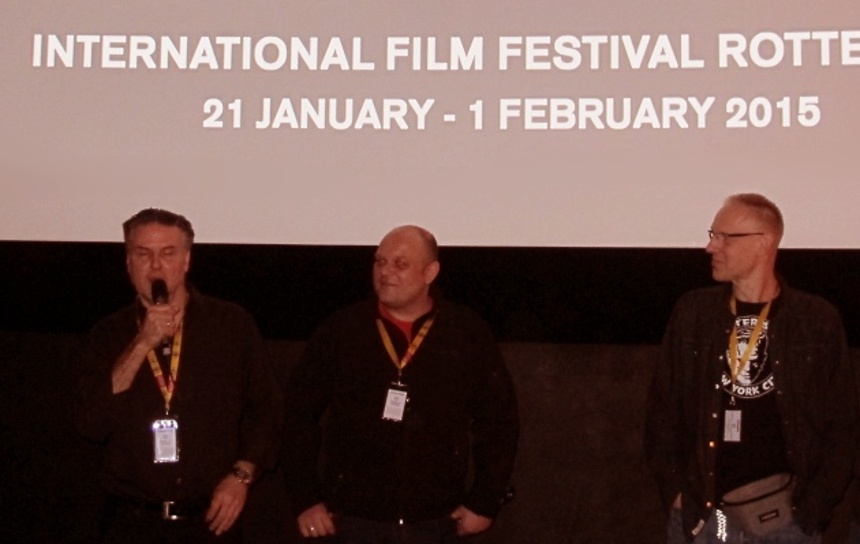 This weekend, the Berlin-based horror anthology German Angst can be seen at Fantasia. It had its world premiere at the International Film Festival Rotterdam, and the next day I was allowed to speak with all three directors. In the picture above (taken during the world premiere's introduction) they are, from left to right: Andreas Marschall, Michal Kosakowski, and Jörg Buttgereit.

We published the first half of the interview back in May (read it here), and now that it has landed in the US, here is the second and last part. Note that in this part, we speak about the stories in the segments, so there are mild spoilers ahead...

ScreenAnarchy: How did the German Angst project as a whole come about? Did you all have your stories for a while already, or were they written specifically for this film?

Andreas Marschall: Alraune was originally the first episode. I had it in mind when I thought of the project for the first time, and I had also already told Jörg about it. (Looks at Jörg Buttgereit) And I remember you first had...?

Jörg Buttgereit: I had written something... I had a film project in the nineties which was never made into a movie, and I made a radio-play out of it called Sexy Sushi for nationwide radio, which was quite successful. The first idea we had was to go back to that, and finally make it into a movie. But when I went through my files I caught this very basic, like one-page concept, which was about a girl taking a revenge. I took that. And at the time I had been doing so many stage plays during the last years, I instantly had one of the stage actors I worked with in mind, Axel Holst, and he was very eager to work on the screen as well.
So the funny thing is that in the film he is not really able to act, because he is handcuffed and everything... (we all laugh) Well, you also get to see him walk around the house twice.

Jörg Buttgereit: Yes, but maybe he's actually the best actor in the whole film, and we'd never know! (we all laugh) He is so very good, and in this film he cannot show he can act. And on the other hand we had this young girl, who wasn't an actress, but who HAD to act, who had to be in front of the camera. Actually, that fact was something I was really fond of.

What did she make of it all? Yesterday during the Q&A you mentioned she didn't want to see the film?

MIchal Kosakowski: She wants to see it, just not right now. She and her family are very intelligent, and they discussed this stuff, and we all decided to wait a while with that.

Jörg Buttgereit: But she watched all the stuff we did. We showed her what was happening, what the result is when you do THIS, or do THAT. For her it was kind of an adventure, and she wanted to be in a movie because, at some point, a friend of hers had been in a movie. (we all laugh)

Michal Kosakowski: We were very careful with her, and before every shot we had a long talk with her parents, who were always there.

Jörg Buttgereit: Her parents were there, because they were helping the production as part of their jobs already. It was a very harmonic shoot.

Andreas Marschall: We used a certain apartment in a block in Berlin, and for some of the scenes in my episode we actually used sets in that same apartment, therefore we could use the same people in the crew.

Jörg Buttgereit: For a lot of the film we used private apartments, and the people helped out, which made it a bit like a family production sometimes.

Michal Kosakowski: Which helps, especially when working with younger actors, or with kids. Her mother could help with this scene, her father with that scene, you know?

Jörg Buttgereit: The funny thing is, when someone like that young actress is on set, you suddenly get more sensitive about the stuff you do. (we all laugh)
But that was amazing. I mean, yesterday, when I saw the movie as a whole? In one go? I really felt like I'm getting too sensitive for this kind of movie! (we all laugh)
Really! And that already started during the shoot. And yesterday, I could understand why some people were walking out! It's... it's a question I've asked myself, also during the eighties when I was going for... you know... much worse horror movies, like what's the worst you can get. There was a certain point, once in a while, when you were sitting there and a movie was doing something to you, and you ask yourself: what am I doing here? (we all laugh) Why am I not going out and enjoy something fun? Why do I have to watch something this evil, and on Christmas Eve? (we all laugh)
So, yes, to me, making this episode made me more sensitive to the whole movie I think.

Going back to the stories: was Make A Wish also an earlier idea?

Michal Kosakowski: Well, for me it started... I met Andreas Marschall at the Transylvanian Film Festival in 2011 where my film was showing, and we got talking, like "Oh we are neighbours?"...

Andreas Marschall: ...we both like horror movies, we both shoot horror movies, and we turn out to be neighbours, we really live very close to each other... (we all laugh)

Michal Kosakowski: ... so one year later Andreas told me that he'd spoken with Jörg, they had this project, and would I want to join? So I said yes, OK, and within one week I came up with an idea. It was something I had in my mind, from my childhood. I came from Poland, and as a child moved to Vienna, when I was ten years old. In school I didn't speak German well, and was often beaten up by my classmates. I always had these thoughts, like, "Can't you imagine what it is for me? Do you realize what you're doing? Can't you see things from your victim's point of view?" I always had this wish to change the thoughts, you know? To exchange bodies. That's where the idea came from.

Andreas Marschall: And it fit in well, as we all had some sort of "waking up" moment in our stories, where you see things from a different viewpoint.

It's what I really liked about the film, that each story left room for interpretation. Each episode could be seen in two ways. Were there really monsters in Alraune, or are they drug-induced hallucinations? Did we see a bloody revenge in Final Girl or is it a symbol for leaving a situation of abuse? Did the amulet in Make a Wish really swap bodies, or is its magic more subtle, leaving a vague sense of unease and regret in bullies? In each part you are left with evidence for both viewpoints.

Michal Kosakowski (to Andreas and Jörg): He should write our press materials. (we all laugh)

But seriously, was that planned or did you all arrive more-or-less at such stories?

Michal Kosakowski: Not like that, but we did our best to make the segments fit together, to make the film one whole. We used the same crew where possible, and we all had the same director of photography. Him and us, we learned a lot, as he had to do different things for each of us.

Each segment is still very specific. I mean, there is no mistaking which one is by Jörg Buttgereit.

Jörg Buttgereit (surprised): Really? That's strange, I thought I had done so many different things in the past...

Michal Kosakowski: We also put some continuity jokes in there. The picture from the girl in Jörg's segment is shown later, and the neo-Nazis are in the nightclub in Alraune.

Finally, I wanted to ask about the title: do you specifically see these as German issues? Are these the current national fears?

Andreas Marschall: No, the term is meant as a general one. If there is mass hysteria about something you'd say "Oh, it's German angst".

Jörg Buttgereit: I mean, if everybody had suddenly become afraid of nuclear power because of Fukushima, we could have called that "German angst" too. And it could have been a segment in our film.

Thank you all very much for this interview.