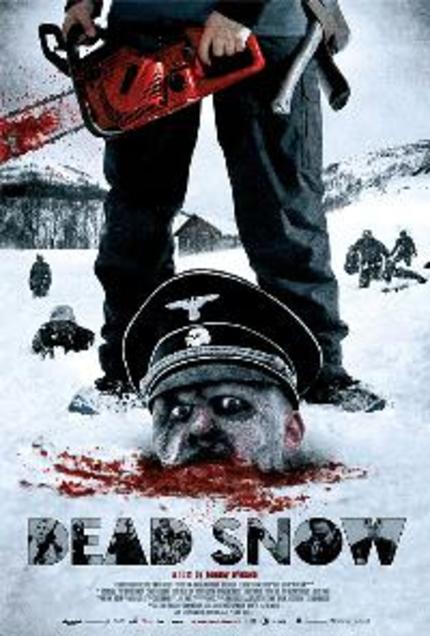 In advance of the zombie apocalypse that will descend upon The Bloor Cinema tonight for zombie day at Toronto After Dark I'll put up my review for Død snø now. The advantages of doing what we do you see. I cannot wait to see this on the big screen and with a blood thirsty crowd. It will be a good time. But don't take my word for it. Come. Join us!

Since the zombie genre would appear to be one that will never die [har de har har] what does a filmmaker do to make their particular offering stand out from the rest? What is it that makes their zombie film one of the worthwhile few amongst the horde? The key to success is balance because after all, the goal here is to entertain en mass. If you can offer up a film that promises good times, good laughs, good thrills and good gore and do it all without looking like you're touting yourself as the next big thing you stand a fairly good chance. Død snø is one of those serious contenders for zombie films that bring the thrills and the chills along with a healthy dose of comedy and then douse it all in blood and guts! It is a true crowd pleaser.

Eight friends from medical school get together for an Easter vacation of fun in the snow at a cabin deeps in the woods near Øksfjord. Seven will travel via the conventional means of motor transportation the eighth, Sara, opts to travel across the countryside and meet her friends and brother there. The seven would appear to have beaten Sara to the cabin so they wait for her taking advantage of the fresh powder and using nature's refrigerator to keep their beers cold. They drink, party, and have sex but they're starting to get nervous that their friend and sister hasn't shown up yet. That night a mysterious old hiker arrives. He warns them about the dark history of the area. During World War II, a platoon of Nazis led by a Colonel Herzog occupied the area. As the stranger tells, most occupying Nazis in other towns would attempt to get along with its inhabitants but this particular group abused and tortured the local people, stealing all their gold and wealth. The citizens finally organized an uprising and the surviving Nazis, including Colonel Herzog, were chased into the mountains. It was assumed that the Nazis all froze to death. Thank you very much for the coffee and sleep well tonight. The next day Erlend goes out to find his sister and the others spend another day in the snow and sun. That night however, Vegard finds a small chest of gold hidden underneath the floorboards of the cabin. Things go bump in the night and there be Nazis outside the cabin looking for their gold. Let the zombie goodness begin!

Wirkola has made a film that finds the right cruising speed from jovial fun and young sexy hi-jinks to fear and tension to and outright fight for survival. I never found it boring yet some may wonder when the actual zombie violence is going to come along and that is just fine because that helps build up the tension be it by anticipation or anxiousness. He gives a healthy number of scares and jumps to tantalize us at the beginning and after the visit from The Wanderer everyone is a touch wound up. Finding their friend will make everything better. Too bad for them Wirkola has other things in mind. Fantastic things.

Their cast of characters is likable. What we have are eights students out for a weekend of drinking, sledding and if lady luck is on their side maybe even a little bit of hanky panky. Perhaps in their own way of speaking out against stereotypical characters Wirkola and Henriksen opt to eliminate the film geek, thus the resident expert on zombies, very early into the zombie blitzkrieg. There is no need to many any of them likable but they didn't make the mistake of making any of their characters unlikable to the point that you do not give a toss who gets it and how. But any one of them could be your friend. I figure myself to be more of the Vagard variety which means bad news for me if ever I am stuck in a cabin in the woods and their be Nazi Zombies outside the windows. These are just regular fun loving kids stuck in the middle of nowhere who have to muster up the courage, as their grandparents and great grandparents did before them, and fight off those Nazi bastards.

Another reason why Dead Snow is successful as a film is the humor. For the most part the humor is hardly obvious, opting to be delivered on the sly and quite underhanded at times. You almost miss the jokes, albeit very good ones. Wirkola and fellow script writer Stig Frode Henriksen, who also plays Roy in the film, avoid doing a zombie song and dance number; as if they're saying, "This is funny and if you miss it don't worry you're still having a good time". Humor isn't the obvious goal here but just a nice sidebar to the growing chaos on the snowy plains of Øksfjord.

Another standout is how innovative Tommy Wirkola has been in his film while still adhering to the rules. Zombie violence is darn good violence there is no argument against that. Wirkola still manages to offer up some inspiring methods of dispatching the living though. Kudos for managing to be creative in a genre that is in danger of being crushed by its own dead weight [I'm on fire!]. Yet, where there are zombies there will also be gore and there is no shortage of that be it inflicted by zombie or by self once things get rolling along in an avalanche of zombie goodness. With plenty of homages and winks at zombie and horror films of the past Wirkola acknowledges his influences and add his own chapter to the ever growing zombie canon.

Do you feel this content is inappropriate or infringes upon your rights? Click here to report it, or see our DMCA policy.
Tommy WirkolaStig Frode HenriksenVegar HoelCharlotte FrognerLasse ValdalComedyHorror

Toronto After Dark runs through to Friday, August 21st. Check the official site for screen times!