In 2047, 29 years after the events of the original Iron Sky, young Obi (Lara Rossi), the daughter of Renate (Julia Dietze) and the now deceased James Washington (Christopher Kirby in the first film), is one of the few persons who’s trying to do something about the fact that the Moon is now a very troubled place.

While the Nazis are long gone, the Moon suffers from overpopulation (when the Earth collapsed in 2018 around 2,000 humans managed to escape to the Moon), social inequality, health issues, constant quakes, and even from a dominant and privileged religious cult that worships Steve Jobs.

When a spaceship strangely arrives from Earth, even if everybody thought life there was nonexistent, things in Timo Vuorensola’s Iron Sky: The Coming Race start getting a lot weirder.

What if the former Moon Führer Wolfgang (Udo Kier) was able to survive because he’s a reptilian alien who arrived to planet Earth since the dinosaur age? What if the others of the Vril extraterrestrial race –including Adolf Hitler (Kier as well), Margaret Thatcher, Caligula and Mark Zuckerberg– are actually living in the center of the Earth and have an extremely powerful source of energy that could be used to save the people from the decadent dark side of the Moon? How in the hell did Vuorensola and his writers come up with all of this crazy new material?

To answer the latter question, I interviewed Vuorensola himself prior the release of Iron Sky: The Coming Race (in theaters, On Demand and on Digital on Friday, July 19). Read on!

ScreenAnarchy: IRON SKY: THE COMING RACE takes place in 2047, with the daughter of the protagonists from the original as the new hero, so how was the genesis of the idea of not making a sequel right after the events of the first film?

Timo Vuorensola: I had this idea of dealing with the Hollow Earth theory actually at the same time as we came up with the idea of doing the film about Moon Nazis. The Hollow Earth theory was another favorite of the stuff that I really enjoy reading about. That idea was sort of carried along through the many years we worked on the first film and when it came out, eventually there was a lot of interest on it and we realized maybe we should just go ahead and decided to do another film.

I said, “OK, I want to do a film about Hollow Earth”, and of course the producer was first like “are you crazy? What is Hollow Earth?”, and I was like “come on guys, you know what Hollow Earth is.” It’s the oldest science fiction story there is actually, even before science fiction was about going to space or Moon or anything, before that, in the eighteen hundreds, people went underground, secret places underground, under the ocean and stuff like that; that was where the science fiction was born. It was always in the back of my head that if I managed to pull it off [a movie about Moon Nazis], the next one I’m going to try to go for it with the Hollow Earth.

In that sense the first film was basically a space/invasion movie, now we have this journey to the center of the Earth. It feels much more like an adventure film, so what were the other main references in that regard? Jules Verne’s novels?

Yeah, absolutely. Starting with the name, The Coming Race, I took that name from an old science fiction book from the eighteen hundreds called Vril, the Power of the Coming Race, that was a story about a man who goes into the center of the Earth and finds something there, but the story itself is very different from there.

For the actual story, I think the origins come from Jules Verne, with Twenty Thousand Leagues Under the Sea, those adventure stories, later on definitely Indiana Jones, that kind of pulp but also big scale adventure stuff from 80s and 90s Hollywood: Jurassic Park and all that stuff. When I was kid, the first books I read from the local library were by Jules Verne, those adventure books, those science fiction stories he wrote, ever since then I’ve been a really big fan of that stuff so yeah, the story comes from there and then there’s a lot of elements that I reference from the films that I grew up watching in the 80s and 90s.

Then we have this whole new crazy mythology that involves an alien race, reptilian politicians and so forth. How was the process to come up with stuff that is as crazy as the first film’s Moon Nazis?

Yeah [laughs], that actually trace us back partly into the Moon Nazi theory, because at least one version of that theory says that the Nazis UFOs took the technology from the race of superhumans who lived underground, and you can access the underground by going into Antarctica, where you’ll find an access into the underworld where these people live, and they gave this superior technology to the Nazis and they were able to create the Nazi UFO technology.

It’s like putting together a puzzle and just deciding what’s too crazy to stick into this puzzle, of course I had to throw out a lot of stuff. But it’s kind of fun to create a puzzle and mostly all of that stuff is already out there, on the Internet you can find dinosaurs, underground Hollow Earth, definitely you can find that stuff, all kind of stories about the Holy Grail, Hollow Earth, infinite power source, all of that is there.

Of all these reptilian leaders, you are particularly mocking the technology idols, such as Steve Jobs and Mark Zuckerberg. How fun was to do that?

[Laughs] Yeah, it was fun. Of course we were also slightly worried, like “OK, where’s the line? Where we have to be careful?”, because already when we were making the first Iron Sky we had to be very careful with what we actually make fun of; Nazis is a topic that definitely has raised a lot of questions from many people.

But it’s really fun to actually work on crazy stuff like this, like waking up everyday and saying “today I have to come up with the way reptilian Hitler o reptilian Steve Jobs looks like”, just going into that weird world and then after working you emerge out of it and say “wow that was intense.” The real world feels more absurd so in that way I enjoy working with this super crazy concept, because they kind of create an escape room for sanity.

Sometimes it’s a bit of a trick to try to explain to the crew because not everybody is sort of into that stuff as I am, so it might take a while but I’ve learned that it’s just patience and the more the crew and the cast trust you as an artistic director or story creator, the easier it gets because they just say “OK, whatever you say, if that’s what you want then we are going to do that.” That’s how it is.

You have Udo Kier returning and he has a bigger presence with two different roles, now that we get to know the truth about the Nazis. How was to work again with Udo?

I had already the role for Hitler in mind but I didn’t know who to cast for him, I was trying through a lot of options, I needed something interesting for the role of Hitler and then Udo called me up and said “Timo, come over to my place in Palm Springs”, and I went over there to meet him.

He said, “I read the script and I think I should play Hitler”, and I was like “yeah, you’re already playing Wolfgang”, so he said “no, no, I really think that I should play also Hitler.” Then it sort of clicked in my head, “of course! What else can I do? That’s the only way to do it.” 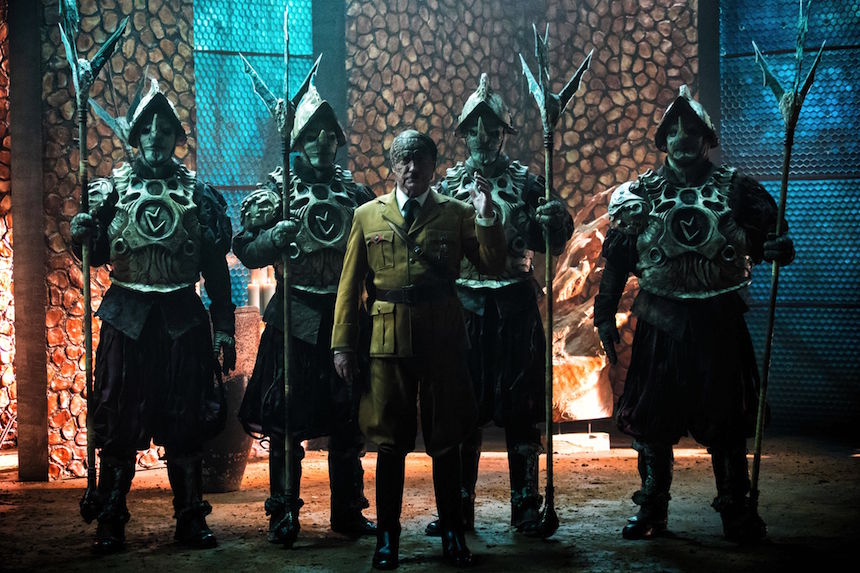 At that moment I realized that it was a brilliant idea. Then of course the story of the two brothers became stronger; originally it was not much of a brother story. It’s the oldest thing you have seen already from the Star Trek era, there’s the evil brother or the evil twin brother from a different universe, it’s science fiction stuff. It was also nice to have that kind of node towards science fiction origins with putting Udo to play the brothers.

And of course, who else could play Hitler? Nobody acts or plays characters like Udo Kier, he’s absolutely one of a kind.

There’s a lot of religious stuff, a theme that wasn’t explored in the first film: the story of Adam and Eve, that scene that references the Last Supper and, of course, the Steve Jobs-based religion with Tom Green’s character. Where did that come from?

Yeah because the first film my idea was to talk about politics, it’s a satire on politics. And when I started with the second film I said, “OK, politics, I’ve done that already." This one is more a satire on religion, the religious myths, together with how the humans were born, how the religions have been affected the whole process of human kind, and also which way the religions are going on in the future.

I think that’s an interesting topic, because I don’t think religions are going to disappear, just the religious characters are going to be different. Characters like Jesus and Muhammad, they come from such a long time ago that they don’t represent anymore the world that we live in, and that creates a lot of problems. 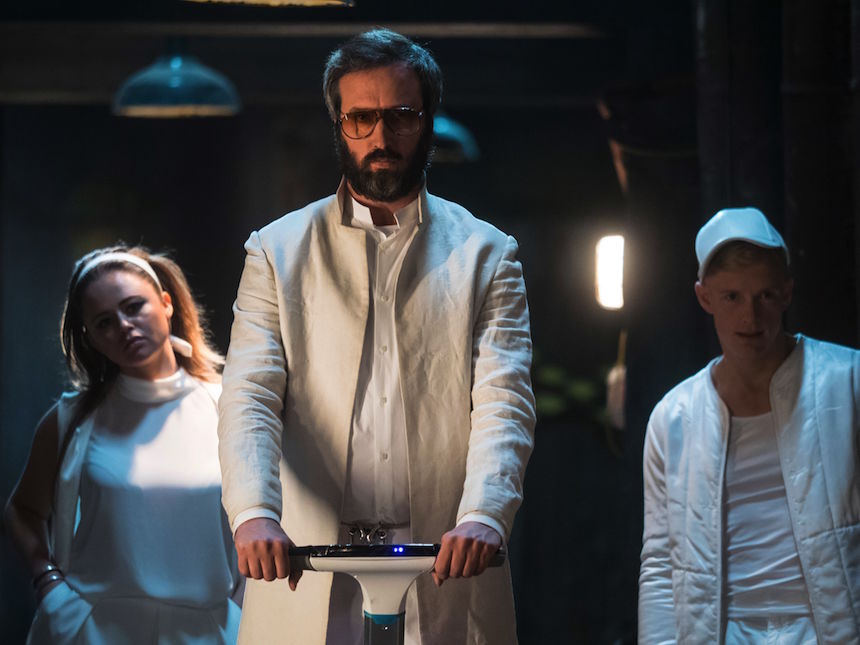 Religions, I believe, are a fundamental part of human mental state, we kind of need religions and we are going to need different Gods in the future. If we look around, technology is definitely going to be one of those things that really create not only the future where we live but also the kind of future that the religions are going to be.

That [the Steve Jobs stuff] was of course a parody on that. The basic idea was that the first one was a satire on politics and future politics, and Iron Sky: The Coming Race is a satire on religion, the birth of human kind, religious mythologies and then the future of religions.

Do you feel this content is inappropriate or infringes upon your rights? Click here to report it, or see our DMCA policy.
Iron SkyIron Sky: The Coming RaceTimo VuorensolaUdo Kier

More about Iron Sky: The Ark