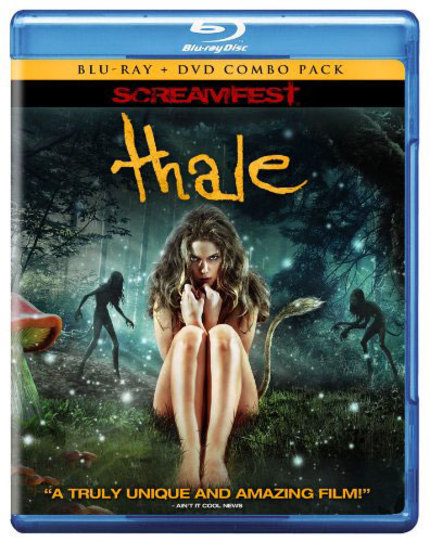 Norwegian mythical thriller Thale was recently released on Blu-ray and we're now finally able to see what all the hubbub was about. There was a lot of noise in horror circles about Thale presenting a new kind of mythology as yet unseen or heard of by English speaking fright fans, and the film got some early good press for its concept from many online sources, including ours. After making its international premiere at SXSW in 2012, the film was picked up and released by XLRator Media at the tail-end of April. Worth the hype? Read on...

The first ScreenAnarchists to take a stab at Thale was Peter Martin from that US premiere in 2012, and his take was measured at best:

Based on Norwegian folklore, Thale takes its cue from a mythical creature called a huldra, female in appearance in all respects, with the addition of a long tail. Written, directed, photographed, and edited by Aleksander Nordaas, Thale falls somewhere between Trollhunter (also from Norway) and Rare Exports (from Finland) as far as tone is concerned. In its pacing -- slow, with many static shots that are held too long, to minimal effect -- it leans more toward the dry telling of a fairy tale. When, eventually, there are bursts of action, the energy is very welcome...

I think that's a pretty good read on Thale, actually. The film has some great ideas, but is slow to explore them and doesn't do so in quite enough detail to sate the fan looking for logic. Normally I'm a proponent of the down and dirty, get-in-and-get-out method of genre filmmaking, so the 78 minute run time was very appealing at first. Unfortunately, what it meant to me was that a lot of the story was just left unexplored and the details that were left out might have made for a more satisfying experience. Part of this may be a cultural divide, perhaps in Norway those details are more well understood by the layman, but this layman would've liked some more context.

Thale has great moments of fun and uses its cast well, however, which leads to a couple of solid character performances. In fact, the lead performances of Erland Nervold as Elvis and Jan Sigve Skard as Leo are easily the best thing about the film. The actual creature doesn't have much to do, but that's by design, it's just not terribly scary. I wish there was more to Thale.

Thale comes to Blu-ray from XLRator's Screamfest imprint with a pretty impressive image and sound mix. The film, obviously shot on some older generation HD cameras, looks fantastic on Blu-ray. There is a lot of light in this film, unlike many horror features, and the boosted contrast (which I hope is a stylistic decision) works in the film's favor. Colors are bright and vivid, and image clarity is very good, sometimes nauseatingly so. The audio is similarly impressive, though with relatively little action, there's not much that's going to test your home theater. Sadly, there are no bonus features at all, some would have been cool to either talk about the folklore origins or at least the FX of the creatures. An opportunity missed.

I'm not sure that I can completely recommend this to everyone as a buy, but certainly give it a rent and the worst case scenario is that you're out a couple of bucks and a little over an hour. Not a bad trade off.