An Interview With All Directors Of GERMAN ANGST! Marschall! Kosakowski! Buttgereit! Part 1! 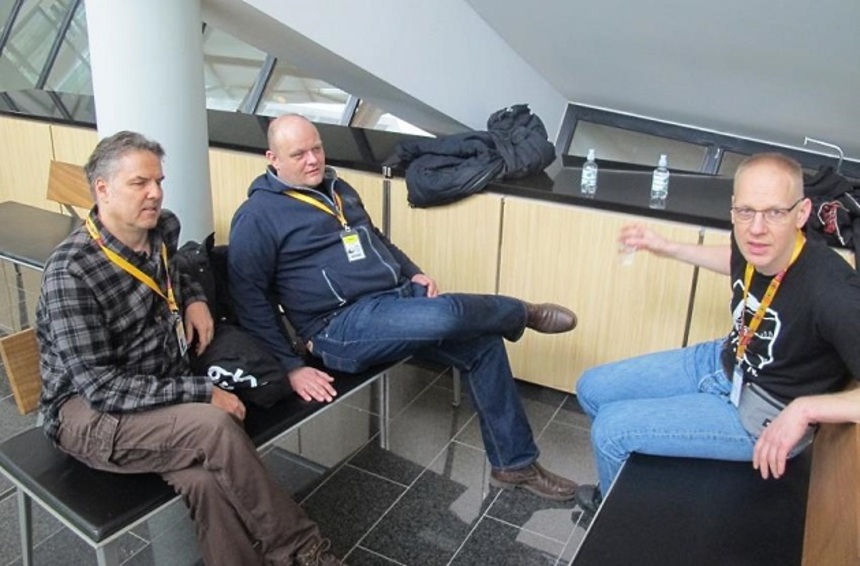 The Berlin-based horror anthology German Angst was among the many world premieres this year at the International Film Festival Rotterdam, and all three of its directors were attending in person.

The day after, I was lucky enough to get to talk with them about the film, and German horror in general. From left to right in the picture above, they are: Andreas Marschall (of Tears of Kali fame), Michal Kosakowski (of Zero Killed fame, who also has a producer credit), and Jörg Buttgereit (of Nekromantik fame).

It became quite a conversation, so I've split the interview in two parts. In this first part, we discuss the film's world premiere, and some of the ideas behind it. Rest assured it is quite spoiler-free.


ScreenAnarchy: Let me start with congratulating you with the World Premiere of GERMAN ANGST yesterday.

Jörg Buttgereit: Were you there?

Yes, I was. Have you heard many reactions yet? Praise? Outrage?

Jörg Buttgereit: People were walking out during Michal's episode. (we all laugh)

What was with the guy who got mad and screamed when he left?

Jörg Buttgereit: He was shouting at him! (points at Michal)

Michal Kosakowski: He got up, got mad and attacked me.

Wu... seriously?! Why? Did you try to stop him from leaving?

Jörg Buttgereit: Someone did.

Michal Kosakowski: Yes! That was weird, and scary. When he got up, I watched him because I was curious, I wondered why he left. But first he started arguing with the people at the exit, and he kept looking at me, at my eyes. I looked away for a few seconds and he suddenly became more aggressive. And then he yelled "Fuck you!!" and attacked me! He was stopped but it was weird, and I was quite scared.

Jörg Buttgereit: The first review! (we all laugh)

Yesterday, during the introduction, the presenter said (and you agreed): "You will now get 110 minutes of education". What did you all try to teach the audience? Andreas Marschall: Not teach, really. What we meant was ironic, that this was not just going to be simple entertainment, but that we all had something to say.

Jörg Buttgereit: I think it is also what was written for the festival catalog, it said something like "you will get to know what the Germans are afraid of." That might be the idea.

Michal Kosakowski: It's not education like in school education, it just means there is something of a message there, you know? That we communicate on a certain level, with this movie. It can be an emotional level, or that you confront something.

Jörg Buttgereit: One of the problems is that most of the time, horror movies are just seen as... as entertainment. And not a very well-established kind of entertainment like in Germany, but in the US it is this entertainment and you can earn big money with it. That doesn't work for all horror movies though, I think. Because as German film-makers, we always will have the need to explain why we are dealing with these kind of "bad" things. In Germany, you need a good excuse to do horror movies. In the US, you can make a career out of it, but in Germany you can't.

Michal Kosakowski: In Germany, you're always sort of on audition, you know? You always need to justify why you're doing this. That's like a major thing.

Andreas Marschall: On the other side, for all my life it has been a challenge not to explain myself. To just say: I do this, I like this kind of film, so fuck you... (we all laugh) ,,, but the other side is that I mostly don't like... pure entertainment. Even in American films, or European films, I still want there to be something underneath the entertainment. I want to have something more from a film. Not just irony or a body count, I want something that is touching me deep inside, and that is what we were trying for in our episodes.

Michal Kosakowski: For me as a producer, it was important to have topics present in all episodes. Like in the first segment, Final Girl, there is domestic violence, a strong topic, and it is connected to the radio news announcement about the insane Muslim guy who killed his wife.

Jörg Buttgereit: The sad part is that this is an actual thing that really happened in Berlin. The only thing we changed were the names, but the announcement was very accurate.

It sounded like something you'd expect to see on Fox News...

Jörg Buttgereit: Yes! It is trashy in a way, but at the same time completely accurate, including what the guy said in court as his defense: "I thought I was Jesus and you are the devil". (we all laugh)
That's what he said! And it was two years ago, before all the current crazy religious mayhem started in the news...

Michal Kosakowski: You can see these extremist topics all around us. Domestic violence, neo Nazis, Andreas' segment with the sex and drugs...

Jörg Buttgereit: ...And strangely our film suddenly became topical. I mean look at Michal's segment, the current rise of the right wing is a concern. And me using that news bit seems to have appeal now, because of the current terrorist threat, and Andreas' segment with the sex and drugs... it has everything a tourist would be seeking now in Berlin, we get overcrowded by tourists! (we all laugh)

Andreas Marschall: But actually, that segment, Alraune, is more about addiction to artificial sex, to the Internet, to the new media. They seem to fill all your needs, which is dangerous. It can be so attractive, so easy, you get addicted. And this focus on sex and addiction can also be seen in cinema from the 1920s over here, in the silent era. This expressionist era we chose as a starting point for this film.

A lot of films from that era, pre-code films like Metropolis and Cleopatra, actually go pretty far, with for instance bodies fully visible through translucent gowns. I was surprised to see how much they were allowed to get away with. Andreas Marschall: Yes. People like Fritz Lang, and Murnau, they shot a lot of great horror movies, but with the rise of the Third Reich, all artists who did this had to emigrate to the States, and they founded the American horror tradition. But in Germany the tradition was damned. With German Angst, we made an effort to also refer to the old German horror films. Not literally, I mean we didn't set out to make a 1920s film, but we wanted to continue that tradition.

Jörg Buttgereit: Germany established and founded the horror genre, and now we're not part of it anymore, and that's a shame.

Michal Kosakowski: It also shows how a big war can change a whole society. Suddenly nobody allowed horror.

Jörg Buttgereit: The screen was clean during the Third Reich. Nothing bad was allowed to be shown on the screen, which damned horror.

Michal Kosakowski: The propaganda machine under Joseph Goebbels during the Nazi regime was so well-organized, so well-structured, nothing sexy and nothing terrible could be shown to the audience.

Andreas Marschall: They shot some great movies then, but they were all completely... sanitized.

Michal Kosakowski: The first movie to be banned by the Nazis was Fritz Lang's The Testament of Dr. Mabuse, right after Hitler was elected in 1933.

They thought it was secretly a punch at the Nazis?

Andreas Marschall: There were similarities in the power structures of the Nazis and the one used by Mabuse. They didn't want audiences to associate Nazis with gangsters.

Michal Kosakowski: But the official argument was that the audience should not be allowed to have to deal with such a psychotic person. It would be too much, and cause problems. And now we should be getting back to talking about German Angst. (we all laugh)


Next up in Part 2: A closer look at how the film got made, and the separate segments.

German Angst is currently playing select German cinemas, and will be traveling to several festivals worldwide. The German DVD and Blu-ray were released last week, and you can see here what the Limited Edition looks like.