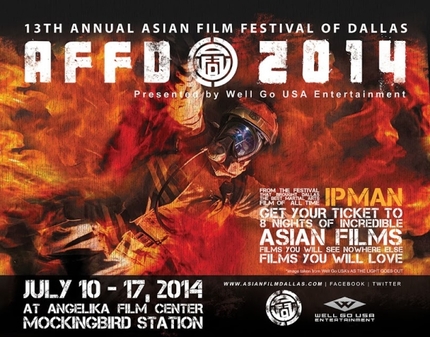 Many years ago, in the ancient year of 2006, I was fortunate enough to have the kindly overlords of ScreenAnarchy publish a few of my words regarding the Asian Film Festival of Dallas. It was the first time anyone ever gave a shit about what I had to say and it was just enough recognition to encourage me to continue trying to put my thoughts into words.
Now, eight rears later, and four years after being welcomed to the site as a contributing writer, I am grateful for the opportunity to share news about this film festival again, the festival that made me love festivals.

The Asian Film Festival of Dallas is now celebrating its 13th year. From a weekend of repertory screenings to the site of one world premiere, six North American premieres, two international premieres, and two US premieres is a long, long road that I've been happy to travel right along with everyone involved. This year's line up is strong, and features several films that have been getting great reviews, sometimes ever from us, from other festivals. Here are a few to look out for:

Masaatsu NAITO is the head of the small and poor clan in Northern Japan. He is ordered by the Shogun to come to Edo (capital city) in just five days with his people. The cost for the journey is incredibly high and usually takes eight to twelve days. Naito has no money, and it's impossible to get there in only five days. However, the shogun's order is a must or his land will be taken away. Will he and his men be able to achieve this impossible task?

Based upon the manga written and illustrated by Yana Toboso, this live action movie stays closely to the dark tone of the story but is set in the future 130 years after the events in the manga. Shiori, (Ayame Goriki) an orphaned aristocrat summons a demonic butler Sebastian (Hiro Mizushima) to aid her, at the price of her soul. Possessing a wealth of knowledge, unbelievable skills, perfect looks and grace, he is a butler without flaws. He is also a demon from the depths of hell who will not hesitate to take lives with the skilled manipulation of dinner cutlery.

In 1777, one year since he had taken reign, King Jeong-jo bears a perilous palace life with his dedicated court servant, Gap-soo, amidst opposition and threats from those around with political ambitions. Meanwhile, Eul-soo, a member of a secret assassin group, receives orders to kill Jeong-jo. Gap-soo, who had also been in the same secret assassin ring as Eul-soo, later confesses to Jeong-jo about his dark past and his motive for coming into the palace. To Gap-soo's surprise, Jeong-jo asks Gap-soo when he had given up being an assassin, then orders him to just leave the palace. However, Gap-soo finds out that there is another assassin besides him and frantically returns to the court, only to discover Eul-soo in combat with Jeong-jo.

The stars of SAIGON ELECTRIC Vân Trang and Khuong Ngoc return to AFFD in this hilarious comedy. Director Thien Do's newest film is a social satire set in modern-day Vietnam. Saigon businessman Lucky Loc makes high-end fake "ghost money" that is meant for dearly departed relatives to use in the afterlife. His good fortune comes to a sudden halt when he pays with "funny money" to an unsuspecting saleswoman, Quyen. Believing it to be his lucky charm, he's convinced that giving away the bill caused his misfortune. At the same time, Quyen's Quyen's fortune plummets and she blames the cursed "funny money" for it. When Lucky tries to retrieve the bill and Quyen holds it for ransom, Lucky must do his best to survive in this increasingly materialistic world.

A period film depicting the culture of bushidou with heart-racing action and realistic swordfights!  "Bushido" (original Japanese title : Shundou) is an authentic period film brimming with tension and bloody samurai swordfight scenes. Regarded as representing the pinnacle of Japanese independent films, this work was written and directed by Yasuo Mikami.

In a small town south of San Francisco, Sheriff Paul Del Moral (Pepe Serna) is driving home through the fog one night when he accidentally strikes a pedestrian, a lone Japanese man. However, before an investigation can take place the man disappears from the hospital without a trace.  At the same time, Japanese mystery author Aki Akahori (Ayako Fujitani) takes a trip to San Francisco in order to escape the press tour for her latest book--a potboiler in her world-famous "Inspector Takabe" series. Feeling lonely and vulnerable, she begins a romantic affair with a mysterious Japanese traveler from Reno who is staying in the same hotel. Her new lover, Akira Suzuki (Kazuki Kitamura), is charismatic and charming but abruptly disappears from the hotel, leaving behind his suitcase and a trail of questions...

That's just the tip of the iceberg. With 39 features from 9 countries, this year's AFFD is one to look forward to. Don't forget to check out Nawazuddin Siddiqui's unhinged performance in Amit Kumar's Monsoon Shootout, Juno Mak's directorial debut, Rigor Mortis, a repertory screening of Hayao Miyazaki's Lupin III: Castle of Cagliostro, Sion Sono's paean to filmed cinema, Why Don't You Play In Hell, and so many more! Check out the full schedule below and visit the site linked below to buy your tickets now!

All  screenings will be shown at the Angelika Film Center - Dallas

4:15 pm    Funny Money
**Director Thien Do in attendance, Q&A to follow the film

More about The Boomerang Family