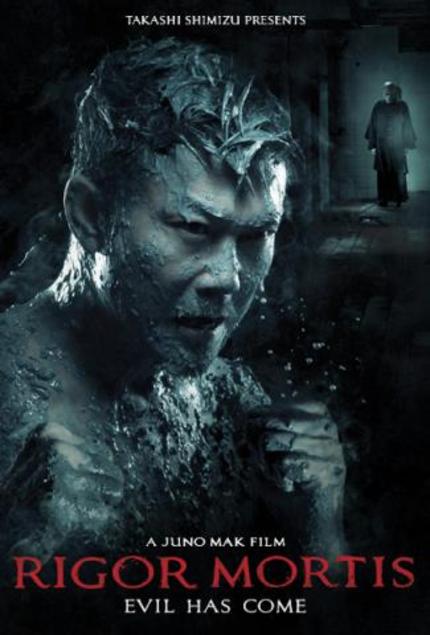 Our friends at Well Go USA are preparing for their June 6th theatrical launch of actor Juno Mak's (Revenge: A Love Story, Let's Go!) directing debut, the critically acclaimed rebirth of Hong Kong horror, Rigor Mortis. In preparation, though there's little that can truly prepare you for the awesomeness of this movie, they've delivered us a taste of what you can expect from the film in this clip, rather innocuously titled, Twins Battle. Prepare for badassness, and if you're curious, you can check out James Marsh's rave review from last year right here.

Here is Well Go USA's synopsis of the film:

A washed-up actor, desperate and suicidal, moves into a haunted apartment building where supernatural creatures, ghost hunters, taoist exorcists, and the souls of the undead are among his neighbors.

And here is the much more descriptive and baffling Google Translated synopsis from the film's official Facebook page:

1980s famous action star Siu Ho (Chin Siu Ho) once with "Mr. Vampire" Zombie Hunter plays a smash hit, but unfortunately the eldest older, retired, confusion and damage on private life, helpless to move into public housing units Haunted House "2442 "​​live, and decided to settle in his own life haunted house, but ran into some people who change his fate, such as the hidden world of the last Fearless Arab friends (played by Chan), no home to return suffered severe neurological trauma Yang Feng (Kara Hui), but at home, helpfulness possession of a coffin estates housewife Mei Yi (Paw Hee Ching) and, more shocking killings raging zombies, Siu Ho and a friendly face of ferocious zombies attacked again , must try to force it to surrender itself with mad bloodthirsty undead ......