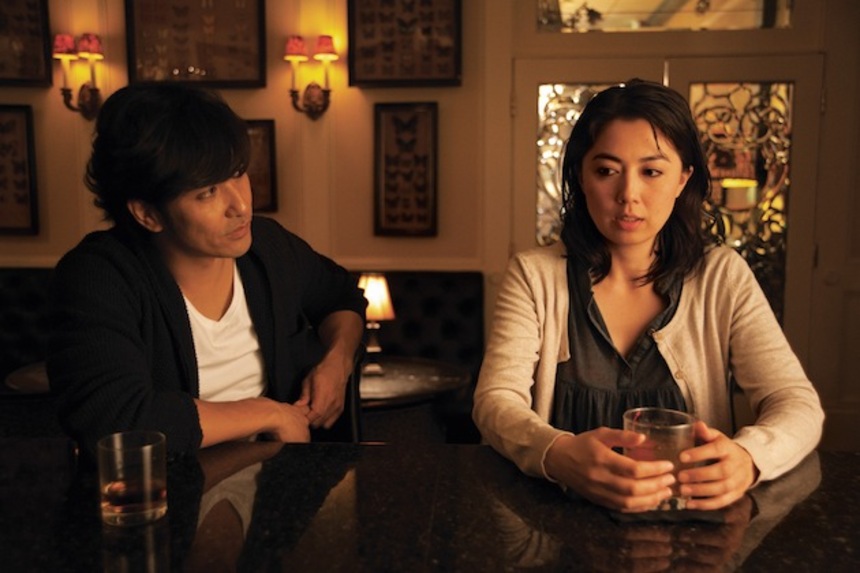 Dave Boyle's fifth feature, Man From Reno, is in many ways both refreshing and frustrating in its pulp leanings. It is far less a typical pulse-pounding thriller, and more a good ol' fashioned mystery with its roots firmly planted in a real world-esque procedural.

Fujitani Ayako (perhaps best known to ScreenAnarchy readers as the star of Michel Gondry's segment in the triptych-spun Tokyo, as well as the Heisei Gamera series from the 1990s) stars as Aki, a famous Japanese crime novelist, who escapes to San Francisco in the middle of her latest book tour. There, she meets a handsome and charming stranger played by Kitamura Kazuki. After one night together he disappears from her bed, but not without leaving behind a suitcase and some intriguing clues. What's more, she's being stalked by what appears to be a photographer.

The story that runs parallel to Aki's is that of elderly sheriff Paul Del Moral (Pepe Serna), who encounters an injured Japanese man one early morning in the fog. A regular Joe Nobody, the suspect, becomes known as the Running Man when he escapes from the hospital in the middle of the night.

From there on out Aki and Del Moral unravel their respective mysteries, and of course, we get closer and closer to the anticipated connection point.

Boyle and company pull together their cross-cultural neo-noir from a lot of pop/pulp corners. Dashell Hammett's presence is felt far more than say Ed McBain's, but the film is broad enough to suggest Kurosawa's own detective pictures -- which were inspired by McBain -- Alan J. Pakula productions of the 70s, as well as most major mystery/thriller films shot in San Francisco, including Hitchcock's Vertigo, as well as Coppola's The Conversation and Fincher's Zodiac.

Stylistic cues may feel strongest from the latter with one of Boyle's greatest creative allies, cinematographer Richard Wong, propping up some of the film's best moments with a provocative minimalist eye and expert use of the long shot. Case in point: when Aki finds herself up against some shady characters, she retreats into the shadows, her would-be assailants framed in impressionistic silhouette on the other side of the soft glass of the door. 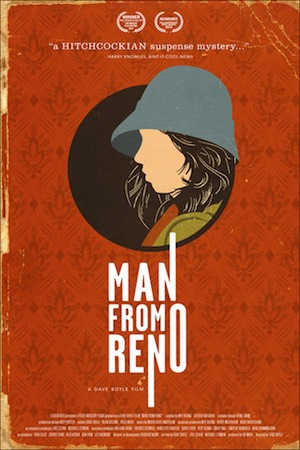 Indeed, Aki's story is by far the more intriguing half of the film. Fujitani brings a haunted and fragile nature to the role when she needs to, with her greatest gift being her inquisitive eyes. Those big deep pools have the capacity to take in all the little details; perfect for deduction, as she easily places her mysterious bed fellow as the titular man from Reno just based off a few scant clues. Kitamura as our Hommes Fatal carries with him a certain menacing charm that is entertaining in his brief time on screen.

The narrative more often than not stumbles when it's focused on the sheriff. While Serna sure seems like a friendly enough guy (which is by and large a classic small town sheriff trope), that's kind of the problem. Yes, he's thorough, but at times he takes things so leisurely (always smiling like the kind father-figure that he is) that any sense of tension or mood is split in two, with the results often feeling muted. That muted nature is the film's biggest detractor for me. While this isn't a picture that is really asking for urgency of any kind, I rarely felt the stakes. And you gotta feel the stakes, even in a slow-burner.

Though I am not intimately familiar with it, Japanese Detective fiction (often called deductive reasoning fiction) also seems to play heavily into the procedural and realist trappings of the film. Aki, and especially Del Moral, use this kind of sleuthing to get to the bottom of what's happening. While I applaud Boyle and co-writers Joel Clark and Michael Lerman for going a route that is more cerebral, and also aims to address social and cultural issues, it doesn't always click, further adding to that muted, leisure tone. Our mystery deepens with stolen identities, murder, and even an endangered species fitting into the proceedings. While all the pieces are fascinating, it's how they come together that I question.

Yep, it can be damned hard talking about the constructs of a mystery plot without ruining the mystery itself. What it comes down to for me is that while the picture keeps you guessing, leading you into some fairly unexpected territory, the results, while honoring some genre tropes, feel largely deflated and somewhat inconsequential to the film just watched but for the reveal... and only the reveal.

As it stands, Man From Reno is an intriguing film, if only because it wishes to be a serious and measured adult mystery at a time when there seem to be so few.

Director Boyle, who has made a nice niche for himself with intelligent, cross-cultural comedies like Surrogate Valentine, certainly proves he can do a lot more than just bring the funny to the screen. Man From Reno shuns practically all modern studio takes on the genre and aims straight for the heart of the classics while inverting several genre archetypes. The picture may be a mixed bag in the end, but with Fujitani's performance, as well as Wong's cinematography, it marks a fascinating departure for the filmmaker, with the promise of even stronger work to come.

A slightly different version of this review was published summer 2014 when the film priemered at the Los Angeles Film Festival. Man From Reno opens in NYC, LA and Philadelphia on March 27. For future playdates and more info please visit the film's official site.