Win KILLERS On Blu-ray From ScreenAnarchy And Well Go USA 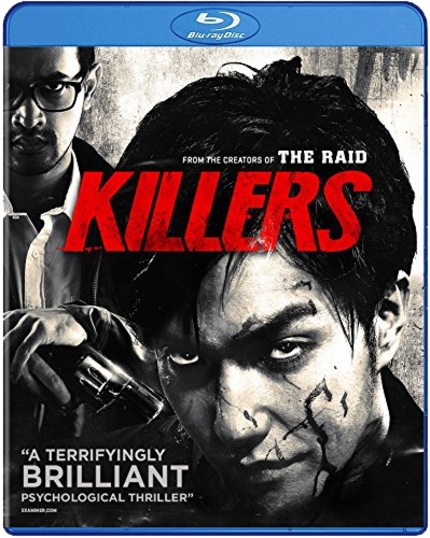 Time to give away some Blu-rays!

To celebrate the Blu-ray and DVD release of Killers by Indonesian madmen The Mo Brothers, Well Go USA and ScreenAnarchy have teamed up to give away a pair of discs to some lucky readers. Killers was one of my favorite films from the Asian Film Festival of Dallas in 2014, and I can't wait to share the perverse joy of this film with others. Our Jason Gorber reviewed the film following its premiere at Sundance last year and had lots of great things to say, like this:

Killers is to the likes of Dexter what Starship Troopers is to Triumph of the Will, a sly and extremely erudite examination of the horrors of horror. It reminds of the likes of Kim-Ki Duk, a film that uses its brutality in interesting an exotic ways. It's a film that shoves its baseball bat down your throat, leaving you shaken and introspective afterwards.

This is most certainly not a film for everyone - some who adore the genre will find it pandering, others will never get past the first twenty minutes of unabashed misogynistic brutality. But for those willing to give it a shot, Killers just may be one of the most interesting, disturbing, and provocative takes on the world of the serial killer ever made.

Are you tempted yet? I figured that rather than grabbing names out of a hat, it might be a bit more fun to make a quick scavenger hunt of it. Killers is a cross-cultural thriller set in Japan and Indonesia, and one of the performers in the film starred in another cross-cultural thriller in 2014 that made my top ten list for that year. I want you to tell me who the performer was and what the film was, but don't leave it in the comments, send it to me in an e-mail.

Do you think you have the answer? Send it here: josh [at] screenanarchy.com with the subject line, "Killers Giveaway." Good luck!