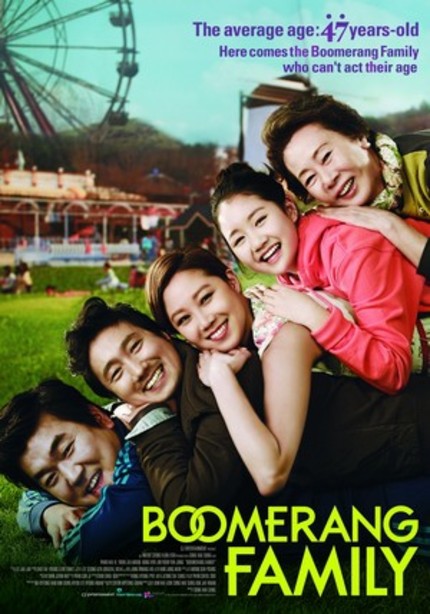 In our original profile of the UK's Third Window Films, I addressed the lack of Korean releases and asked founder Adam Torel why this happened. He responded:

I moved away from the Korean film scene as I felt it was moving away from my own tastes. I got into Korean cinema around 1999/2000 and thought my favourite year was 2001 where many great genre-mix-up films were released. I loved Korean cinema as I felt they were making their films for the Korean market and the tastes of their audience, but as Korean cinema became more and more popular in the West and Japan they started to make too many films for other markets.

We at ScreenAnarchy are thus happy to announce that Third Window films will give Korea another shake with early 2014 releases of two Korean comedies, The Boomerang Family and How to Use Guys with Secret Tips. Adam has one of the best curated labels on the planet, and at this point I have faith in whatever he picks up, so I cannot wait to see this pair. Here's more information from Third Window:

Third Window Films is pleased to announce the acquisition of 2 new Korean comedies: The Boomerang Family from director Song Hae-Sung (Failan, Calla, Rikidozan) and How to Use Guys with Secret Tips from debut director Lee Won-Suk.

While Third Window Films started distribution with a variety of Korean films such as No Blood No Tears, Green Fish, The President's Last Bang, Oasis and more, it's been a while since the last Korean film release from Third Window (Peppermint Candy was the last back in early 2010) due to the main focus of  distribution being Japanese cinema. Now though, Third Window is giving Korean film distribution another go with the acquisition of two new Korean comedies which fit very well into the Third Window catalogue.

Boomerang Family is a wonderfully quirky and black comedy starring some of Korea's finest actors with Park Hae-Il (The Host, Memories of Murder), Youn Yuh-Jung (The Housemaid, Behind the Camera), Kong Hyo-Jin (Daichimawa Lee, Love Fiction) and Yoon Je-Moon (Dirty Carnival, Mother) teaming up to play a totally dysfunctional family. It has been a big critical success and in our opinion is one of the best off-beat Korean comedies of late.

On the more zany and off-the-wall side of things, How to Use Guys with Secret Tips, while possibly too mad for some, perfectly fits in with the Third Window catalogue of strange and bonkers comedies from the Far East. Winner of the Audience Award at the Udine Far East Film Festival, How to Use Guys.. is really an over-the-top, candy-coated and visually blinding romantic comedy that will certainly be loved by those who like their films from Asia a little more 'mad' than others. They loved it at Udine and we really do too, so let's hope more will get into it!

We are aiming for an early 2014 release of both these films so we hope to bring the new year in with some great comedies from Korea!

Below you will find trailers for both. I can't wait for next year!

More about The Boomerang Family

More about How to Use Guys With Secret Tips