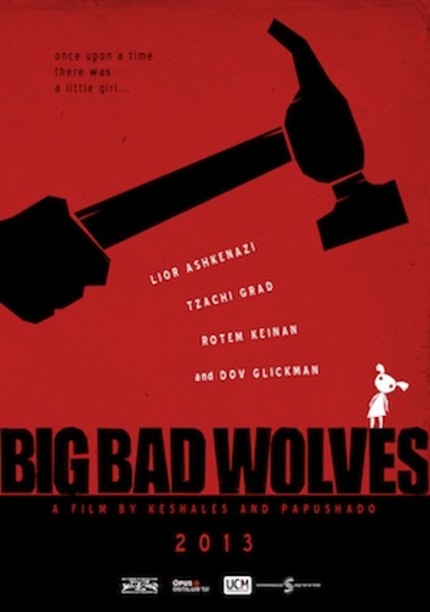 You've just found out you are going to be in Sheffield, UK, the weekend before Halloween! This is not entirely a bad thing because Celluloid Screams, the Sheffield Horror Film Festival runs from Friday October 25th through to Sunday October 27th. And to get your horror groove on you get to watch current festival faves like The Battery and Big Bad Wolves. And if you like kickin' it old school you can also see classics like Return of the Living Dead and Braindead. Be sure to head on over to the festival website for pass information.

Celluloid Screams: Sheffield Horror Film Festival, Friday 25 - Sunday 27 October
2013, returns to Showroom Cinema for its fifth edition, with a weekend packed full of
premieres, previews, special guests and more. We are very pleased to announce the
programme for Celluloid Screams 2013 in what is set to be the festival's best year
yet.

Here's the full list of feature films for Celluloid Screams 2013...

Director: Don Thacker | USA | 2013
What better way to kick off this year's festival than with a hallucinatory horror comedy featuring a mass of talking fungus, voiced by the inimitable Jeffrey Combs? Ian Folivor hasn't left his apartment in months, choosing instead to spend his days languishing in his underwear with only Kent, his ancient wood-panel television set, for company. After a failed suicide attempt, Folivor finds himself talking to a patch of disgusting mold on his bathroom wall, and when the mold talks back it transpires that this newly appointed life-coach has a plan to help him turn his life around.
Gradually Foliver begins to suspect that his fungal mentor might have more sinister and unwholesome intentions in mind. Motivational Growth is one of the most unique and compelling indie films to emerge from the USA in a long time.

Director: Frank Henenlotter | USA | 1982 / 1990
When Duane Bradley arrives in New York City and checks into the sleazy Hotel Broslin, he is repeatedly asked one question: What's in the basket? Few would guess that the answer would be his hideously deformed twin brother Belial... Separated at birth, the two brothers are now out for revenge against the doctors who left Belial for dead and will stop at nothing on their vengeful path.

Basket Case 2 picks up straight after the gore-drenched finale of the first film. With their secret life unmasked and their cover blown, the brothers unwittingly become media celebrities...

Director: Juan Carlos Medina | Spain | 2012
In this beautifully crafted horror thriller, David, a hard-working neurosurgeon survives a near-fatal car accident and discovers that he is adopted. He learns that his lineage stretches back to the 1930s to a group of children with a rare condition that prevents them from feeling physical pain. As he slowly uncovers the chilling fate of the children, David learns the reason why the truth about his past was kept from him for so long. Painless uses the backdrop of Spain's troubled and brutal history to tell a story that is poignant, constantly inventive and utterly devastating.

CLAYMANIA: THE FILMS OF LEE HARDCASTLE

Director: Lee Hardcastle | UK
From the gory excesses of T is for Toilet - his winning entry in the ABCs OF DEATH 26 Director competition - to his outrageous film parodies such as The Raid, The Exorcist and The Evil Dead (and of course his legendary version of John Carpenter's The Thing starring children's' favourite Pingu), animator Lee Hardcastle has established himself as a unique voice in the field of animation.

Lee Hardcastle will attend Celluloid Screams to present this showreel of his work (handpicked by the man himself) and to take part in a Q&A session after the screening.

Director: Jeremy Gardner | USA | 2013
If you're sick and tired of run-of-the-mill zombie films, The Battery has come to reaffirm your faith...
Two former baseball players, Ben and Mickey, cut an aimless path across a desolate New England, steering clear of the shambling corpses that patrol the once bustling cities and towns. In order to survive, they must overcome the stark differences in each other's personalities. Ben embraces an increasingly feral, lawless, and nomadic lifestyle while Mickey is unable to accept the harsh realities of the new world and longs for the creature comforts he once took for granted.

Director: Chad Crawford Kinkle | USA | 2013
In a remote backwoods community, an ancient rite is carried out by its inhabitants, in which a blood sacrifice is paid to a mysterious entity residing in a pit in return for continuing protection and prosperity. The identity of the sacrifice is decided by the resemblance to a jug face: a clay head crafted in a trance-like state by the village's resident potter, but when pregnant teen Ada discovers she is the next sacrifice she steals the jug face and hides it, invoking the wrath of the pit-dwelling deity.

Celluloid Screams welcomes director Chad Crawford Kinkle and lead actress Lauren Ashley Carter to introduce the film and participate in a Q&A after the screening.

Director: Olivier Beguin | Switzerland | 2013
The vampire myth is revitalized once more in this chilling tale of fear, dependency and bloodlust. After a botched blood transfusion leaves him with tainted blood coursing through his veins, photographer Alex descends into a nightmarish void as he begins to comprehend the full extent of his new-found state. His girlfriend Livia veers from utter denial of the situation to resentment and anger. Like Let The Right One In before it, Chimeres focuses on the closer, more intimate facets of a descent into vampirism

THE STRANGE COLOUR OF YOUR BODY'S TEARS

Directors: Hélène Cattet & Bruno Forzani | Belgium/France/Luxembourg | 2013
After the sensuous and experimental Amer (as seen at Celluloid Screams 2010) Celluloid Screams presents the latest mesmerizing opus from directors Cattet and Forzani. When a husband returns home to find his wife is missing, a detective comes to investigate and the two begin to discover the secrets, deception and lies all secreted within the apartment building where the couple reside. As the detective begins questioning the building's other strange tenants, the husband is drawn into a labyrinthine mystery of sex and murder that threatens to engulf him.

NIGHT OF THE [UN]DEAD - ALLNIGHTER

Director: Frank Henenlotter | USA | 1990
Kicking off the Celluloid Screams Allnighter for 2013, Frank Henenlotter's gloriously excessive take on the Frankenstein story (with an introduction by the man himself!)... When his fiancée is killed in a freak lawnmower accident, aspiring mad scientist Jeffrey Franken decides to reconstruct her and where else to source the very best random body parts than from New York City's streetwalkers...

RETURN OF THE LIVING DEAD

Director: Dan O'Bannon | USA | 1985
Do you wanna party? It's party time... The classic 80s horror that put brains on the menu for flesh eaters everywhere, Return of the Living Dead unfolds when two inept employees at a Kentucky medical supply company unwittingly unleash a deadly toxic gas into the atmosphere from a stash of military barrels in the basement.

Director: Lucio Fulci | Italy | 1981
A rare big-screen outing for this gruesome epic from Italian master of horror Lucio Fulci. After she inherits an old hotel in rural Louisiana and begins the process of restoring it, Liza Merril (Catriona MacColl) is visited by a mysterious blind woman named Emily who refers to a 4,000 year old book of prophecies that foretells that Liza's inheritance was built on one of seven gateways to hell.

Director: Peter Jackson | New Zealand | 1992
Celluloid Screams inaugural Allnighter closes with Peter Jackson's ultra-gory cult classic. Anxious mummy's boy Lionel Cosgrove is ruled over by his evil, manipulative mother, who is furious when he falls in love with a local shop girl. Determined to sabotage her son's future happiness, Lionel's mother follows the young lovers on a date to the zoo and is bitten by a Sumatran rat monkey. She quickly succumbs to a deadly infection and transforms into a flesh eating zombie.

Director: Eckhart Schmidt | West Germany | 1982
Disturbed teen Simone is a fantasist who spends much of her time writing fan letters to 'R', a Gary Numan-esque synth pop star. Every day she awaits the postman for a reply but one never comes. As her obsessive fandom intensifies, Simone resolves to meet her idol. Unfortunately when they finally meet, R treats Simone like every other doe-eyed groupie. But Simone is not like the others, and when her dreams of love are shattered, her madness overflows in an explosion of violence.

Director: Aharon Keshales & Navot Papushado | Israel | 2013
In this astonishing revenge thriller, Micky, a renegade cop, is convinced that the perpetrator of a series of brutal murders is mild-mannered bible teacher Dror and sets about following him in order to force a confession (despite having been officially removed from the case). His plan is interrupted, however, when Gidi, the grieving father of one of the murder victims, kidnaps the suspect. The three men embark upon a tense standoff from which none of them are likely to emerge unscathed.

CELLULOID SCREAMS SECRET FILM
The festival's Secret Film screening is a popular fixture every year. Last year's secret film was the wonderful CITADEL, which impressed festival-goers so much that they gave it the Audience Award for Best Film.  What's in store for 2013? You'll just have to wait and see...

Director: Brian Netto | USA | 2013
Kyle and Rachel Massy, a young couple expecting their first child, agree to document their pregnancy for a family-oriented reality show. The production spirals out-ofcontrol after the cameras capture a series of unexplained events, leading Rachel to believe that a malevolent spirit has possessed their unborn child. Told via unaired footage and interviews with the couple's friends, family and production crew, the terrifying story of the Massys' pregnancy unfolds with ever-increasing dread as the strange phenomena grow in frequency and severity and they begin to suspect something is very, very wrong with their bundle of joy.

Director Brian Netto will join Celluloid Screams for a Q&A after the film.

Director: Renaud Gauthier | Canada | 2013
New York City: the mid-70's: Duane Lewis is a timid young man who leads an uneventful life working in a diner, until he is fatefully exposed to the pulsating rhythms of a brand-new genre of music: disco. Upon hearing this new musical sensation, Duane is gripped by an uncontrollable urge to kill and soon no dancefloor in the city is safe.

Director Renaud Gauthier will join Celluloid Screams for a Q&A after the film.

Do you feel this content is inappropriate or infringes upon your rights? Click here to report it, or see our DMCA policy.
celluloid screamssheffieldChad Crawford KinkleSean BridgersLauren Ashley CarterKaitlin CullumLarry FessendenDramaHorrorThriller