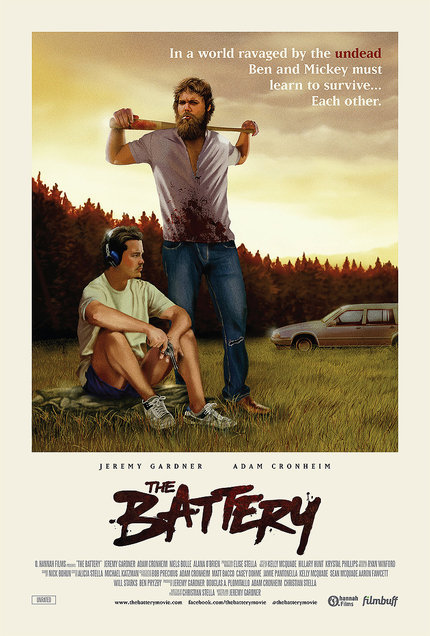 Have you seen The Battery yet? Surely you've heard of it. It's that one anti-zombie zombie movie everyone's talking about on the Information Superhighway (fancy way of saying "Internet."). No hyperbole here -- it's the coolest and most unconventional zombie movie I've seen in years.
The Battery stars Jeremy Gardner -- who also wrote, directed and co-produced the film -- and Adam Cronheim (co-producer) as two baseball players stuck in a zombie apocalypse. Instead of the usual zombie attack after zombie attack, the film spends a majority of its running time focusing on the banter between the two -- chances are high they will kill each other before a zombie does. This is one of the reasons why why we love it -- it's a new take on zombie cinema.
Today, The Battery releases on Blu-ray through the uber-cool distribution label, Scream Factory, and we caught up with the boys to talk about the struggles of making an indie film and who would kick who's ass in a fight with The Walking Dead's Rick Grimes (played by Andrew Lincoln).

Chase Whale: To start off, talk about where the idea started of focusing on two buddies bantering during a zombie outbreak versus showing them fighting off zombie after zombie until the end of the movie.

Jeremy Gardner: Where that came from? Oh, I mean physically in the real world it came from me shooting an audition video with a friend of mine. I had the idea of kind of making a creative audition tape so it was two buddies documenting their time in a post-apocalyptic world, but then after I shot that I couldn't kind of stop thinking about it so I started developing it into a feature about two guys who are stuck together. Then the baseball element came in as a way to separate their characters as a pitcher and a catcher you know, hard-nosed kind of thug and a more sensitive type. But it was also about when I realized I wanted to make a movie I knew I didn't want anybody to lose any money. I kind of picked $6,000 out of a hat and decided to write around that budget. So by doing that, by allowing the limitations of the budget to inform the story, it made me realize it just had to be about two characters and how they were dealing with it instead of being this big broad glimpse of humanity at the end. It had to be much more intimate so that's how that came about kind of organically but also forced by budgetary restrictions.

Speaking of budgetary restrictions, there are some deleted scenes on the Blu-ray, TOOLS OF IGNORANCE (THE BATTERY documentary

Again, I mean it's like I wrote the script around the budget so there wasn't like this big set piece or anything that I had that I wasn't able to shoot that we had to cut. That was the whole point was to try and write something that we could make so I cut all of that stuff out before it was ever even written. But I guess I would say budgetarily it would have been nice to have had money and time to have more zombies. At the end [of the film], the hoard of zombies, if you [watch] the documentary, you would know there is a shot that's missing there that really shows the scope of how trapped Ben is in that car from the outside, and there just weren't enough zombies to make it seem impressive enough to me. So that was something that budget and time greatly informed. Was not being able to get the extras and the time to get that shot correct. Adam?

Adam: I was really hoping there was going to be a scene where he got to jump out of a helicopter but that wasn't going to happen (all laughing).

Jeremy: Money is time really so the thing that the budget stopped us from doing was having more time. Like the Annie sequence, it just got dark so quickly cause we only had those two actors for one day and by the time we got to Annie's stuff it was just dark, dark, dark and rain. Again, to have more time and money to pay those actors and keep them there and a location that we could've secured for longer or even days to have rehearsals. Yeah the budget stopped us from having rehearsal time too. A lot of things like that. So no big set piece it was just timing.

So do you think, was time the most challenging thing shooting this movie or was there something else you would say that was actually more of a challenge than that?

Adam: That's easy. I don't think anybody wants to produce on our side (all laugh). We both started as actors and Jeremy is a great writer as well. Yeah, I think it would be acting all the way. We were producing out of necessity. There was no one else there to do it so we just had to step up and do it ourselves.

Jeremy: I started as an actor but I've always been a writer. At this point in my life or career, you know, I like them all for their own reasons. Writing is something I can do without needing any permission from anybody. I get lost in a story...it's [can be] a frustrating process but so rewarding. Directing is fascinating because you get to run this set and make your vision come to life, but acting is the most fun. It's the most visceral, in the moment process and that's where I started, but I would be happy doing either of those three.

Jeremy: I just don't want to produce anymore. (all laugh)

That's great because I'm actually trying my hand at producing now, so looking forward to it guys. Thanks.

Jeremy: (laughs) No I mean look it's the one job I respect the most because I can't do it. I'm not organized and disciplined enough to figure out how to produce a movie. Again, we ended up producers by necessity but it's something.. we're still learning how to do that. That's why when I meet producers I'm just like, "how the (fuck?) do you do it?"

Isn't that so rewarding... it was do-it-yourself and it's been a success with critics and fans. I mean everyone, it's all they're talking about on Twitter right now is THE BATTERY and you know all these big critics are loving it and spreading the word. It's got to feel great.

Jeremy: Of course I mean it's a dream come true. It's literally a dream come true. To say "yeah we're going to make a movie we're going to make a movie and then oh yeah it's this weird quirky, slow artsy zombie drama, but trust me people will like it". Even now even three years after shooting it and all the film festivals and the awards and the distribution I sometimes sit here and I go, "Why the hell do people like this slow ass movie?" I start to second guess myself even after it's all worked. I think that comes down to personality. That's the thing I love most about movies that I love is you can see the personality of the people who made it in there. That sets it apart. I think that's what people are responding to.

So I want to talk about the car scene. No spoilers or anything, but I want to talk about the car scene. We spend a good amount of time in there and I thought it was really fascinating the things that Ben and Mickey do in there -- like the conversations -- to keep the audience invested, while sitting in the back of a car with nowhere to go. When writing that scene and talking to Adam about the scene, how did you finalize all the discussions and the card games you were playing in that scene to make you feel confident enough, like, "ok this is going to be interesting enough for the audience"?

Jeremy: Well I mean I never was totally confident that it would be interesting enough. I just think that I mean all of the scenes that are in there are written. All the scenes that take place in the car are in the script. There were actually a few that didn't make it. There is a scene where Ben is looking at one of the zombies and he tells Mickey that he looks like some guy who used to be on security at the ballpark that they used to play in and he always hated that guy so he shoots that zombie just because it fucking reminds him of this old guy he used to hate. Then there was a scene where Mickey sees a car on the horizon out the windshield and starts screaming and honking the horn and the car just turns around and leaves and you're not quite sure if it was a mirage or if somebody was coming down the road and realized there was a hoard of zombies and left. These things just got cut for time, but the games were all in the script too it just says like, "they throw cards into a glove, they play the alphabet game, they do this". That was just organic in that way. I guess I knew that (give up the?? 9:49 ) edit. How do we cut this so it looks like time is moving along you don't quite know how much time, but days are passing? It's really about a rhythm and hoping that we don't overstay our welcome, even though that was kind of the point.

Wonderful. Awesome. Cool guys. I have one more question this is for both of y'all. It's probably the most important question you'll ever get in your entire life so I hope you enjoy it.

So in an all-out brawl, who do you think would win in a fight, Ben or Rick Grimes (from THE WALKING DEAD)?

Jeremy: I want to be biased and say Ben, but I think Rick has been through a lot. Depends on when you get him. Depends on if he was still protecting his family or if he's crazy Rick. I think Ben is a little more level-headed at this point. He kind of is a little more flippant about situations. I think he can kind of navigate his way around cleverly, but I think Rick is kind of animalistic in a way at this point where he just like he would probably rip Ben's throat out with his hand. I don't know. I'd like to see that fight.

Adam: I'd like to see that fight too. Let's go to Atlanta.

Maybe you could somehow have a walk-on role on the next season of THE WALKING DEAD.

Jeremy: Somebody make it happen. Let's do a crossover where Ben just wonders in.