Pretty Packaging: ALL THE HAUNTS BE OURS Boxset Bewitches And Enchants

Ard Vijn
Editor, Europe; Rotterdam, The Netherlands (@ardvark23)
Tweet Post Submit
Last year, writer-director Kier-La Janisse released Woodlands Dark and Days Bewitched at festivals and cinemas, and it fast gained word of mouth for being something special. Billed as a documentary about folk horror in films, it turned out to be that but also much more, its 3 hours and 14 minutes providing a loving and thorough look at witchcraft and mysticism around the world. In his review, our J. Hurtado called it "...an outstanding achievement in the academic treatment of genre filmmaking."

Needless to say I was excited when distributor Severin announced that Woodlands Dark and Days Bewitched would receive a lavish special edition Blu-ray release. But Severin did more: from their archives they dragged several films mentioned in the documentary, acquired a few extra, added loads of shorts and other documentaries, commissioned essays... This was all bundled into an absolutely stellar package, an ideal companion-piece for Janisse's film. The end result is a 15-disc boxset called All The Haunts Be Ours: A Compendium Of Folk Horror, and in my overview of 2021 I called it: "Objectively speaking, the best boxset of the year."

Such a claim needs proof of course, and in that article I promised this title would receive a "Pretty Packaging article in the next few days." Ehm... well, better late than never, right?
So here is a gallery of shots. Click on the edge of the pictures to scroll through them, or at the center of each to see a bigger version. 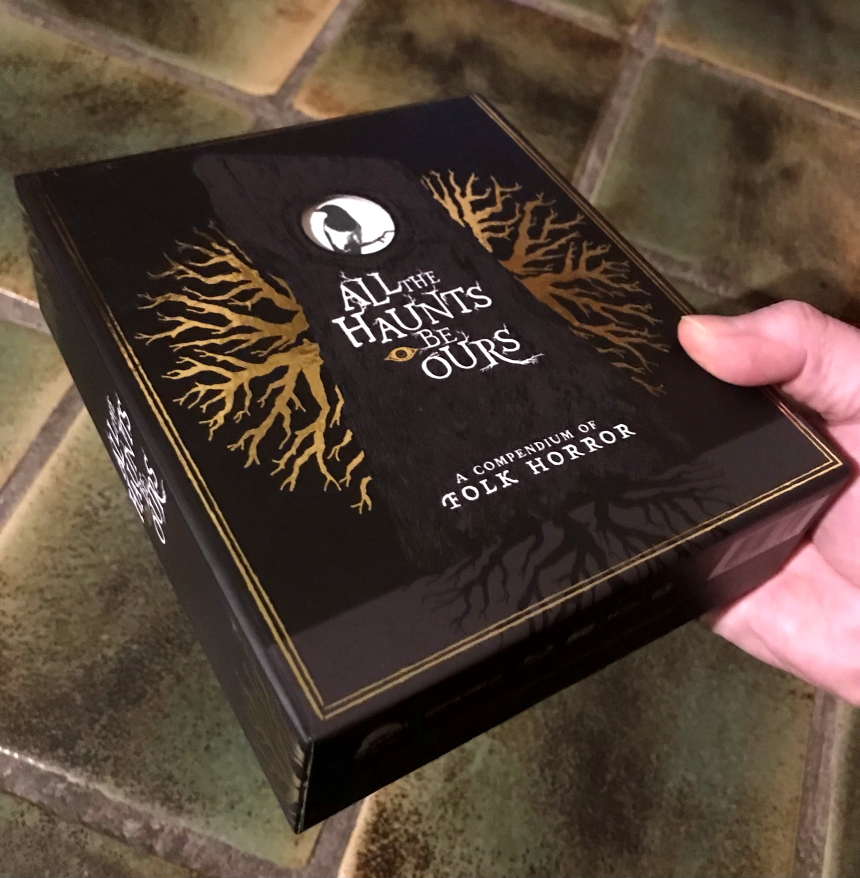 And here it is: a big black slipcase. 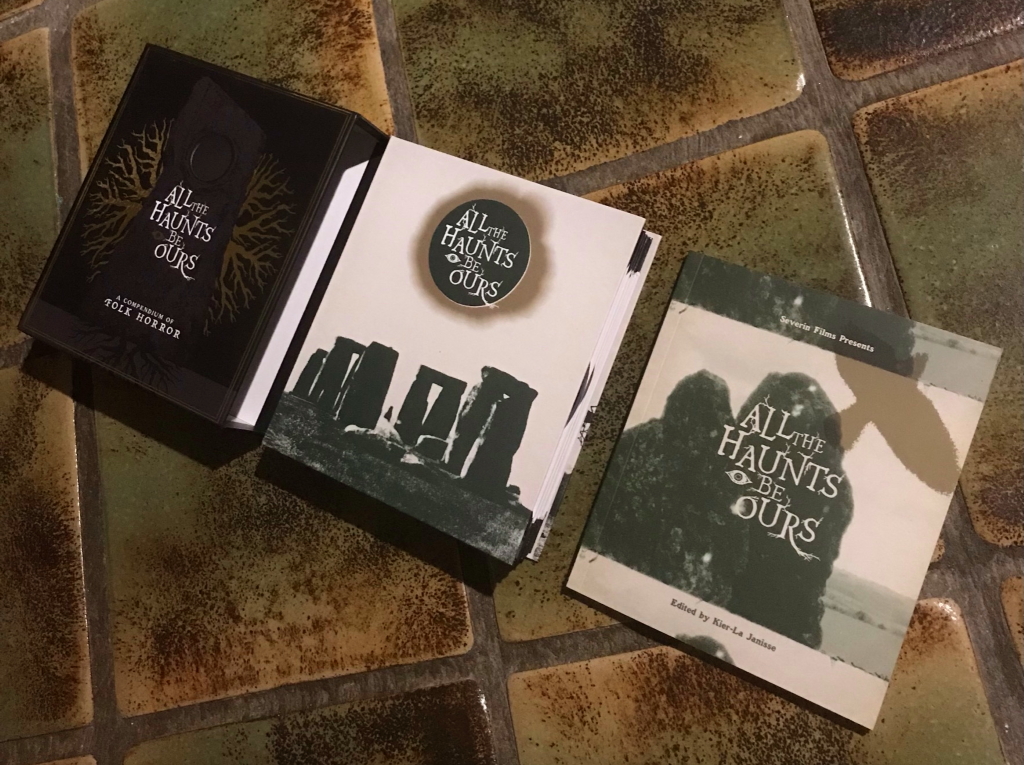 Inside the slipcase are a softcover book and a massive disc-holder. 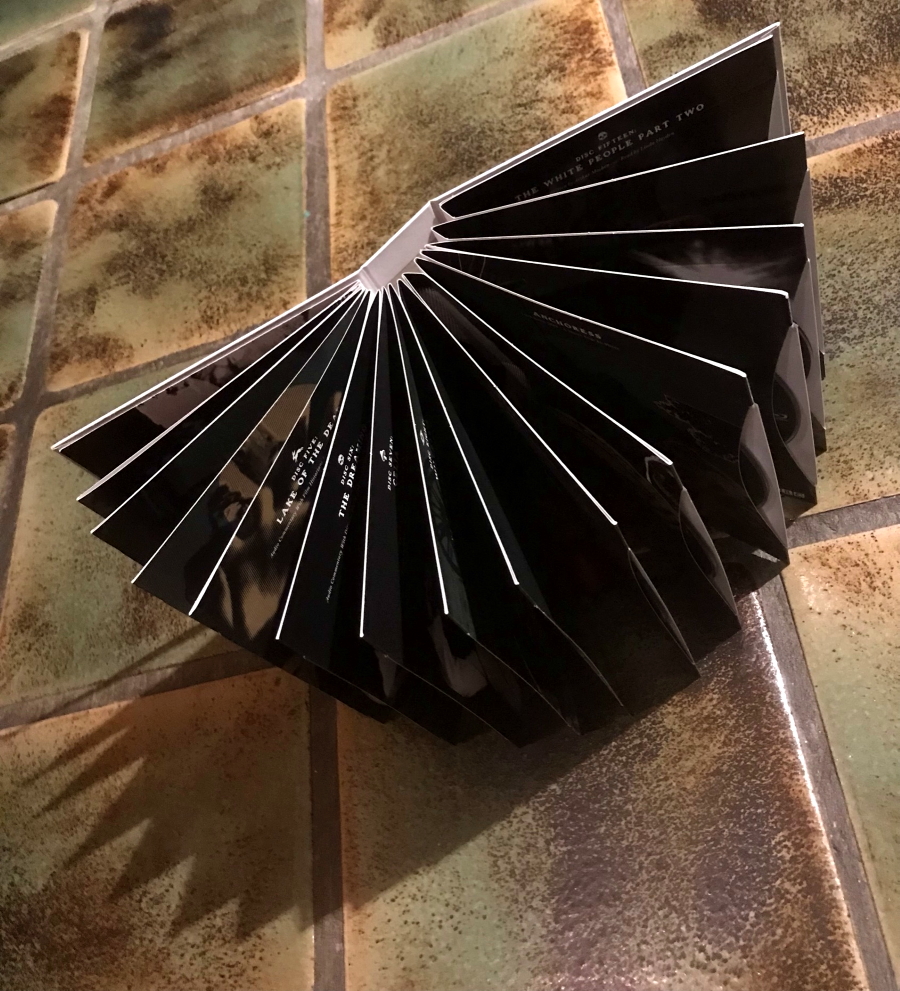 The disc-holder consists of pages, each of which holds a disc. There are 15 discs in total: 13 Blu-rays and two audio CDs. 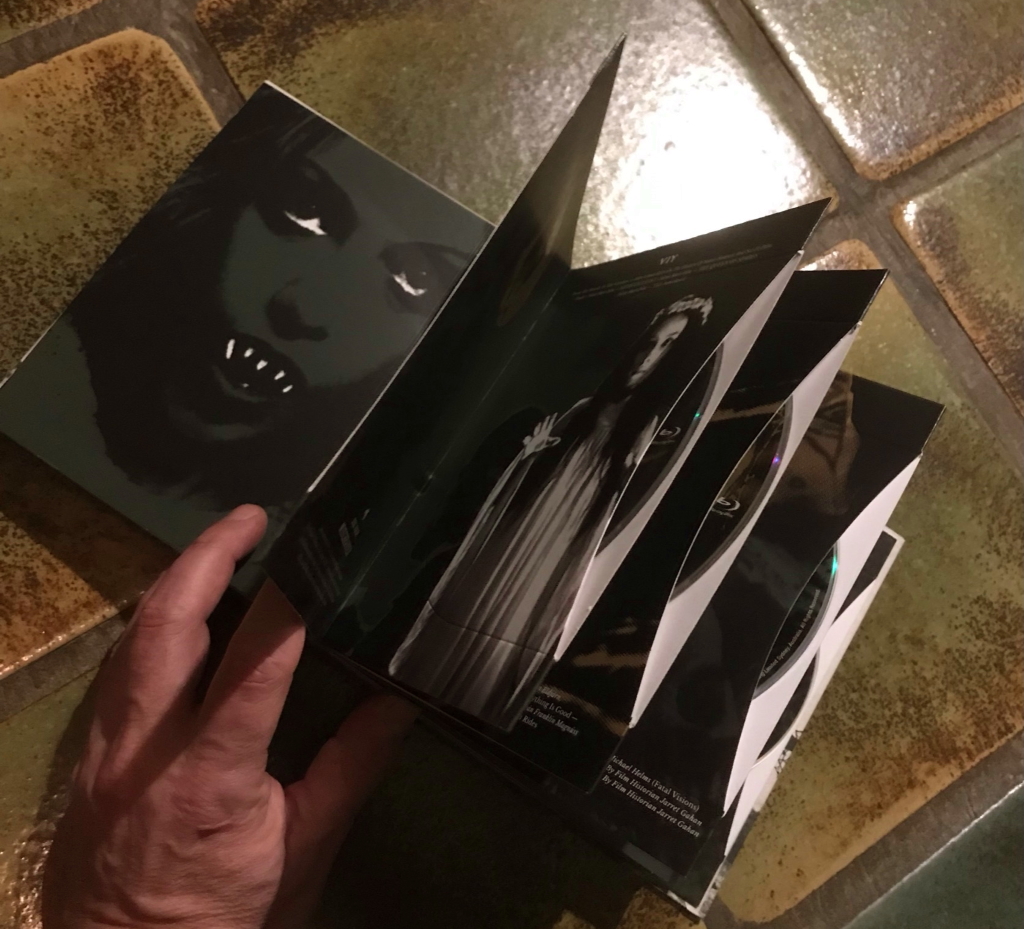 Each double-page contains artwork and information about what's on each disc, mirroring the menus on the disc itself. Very neat. 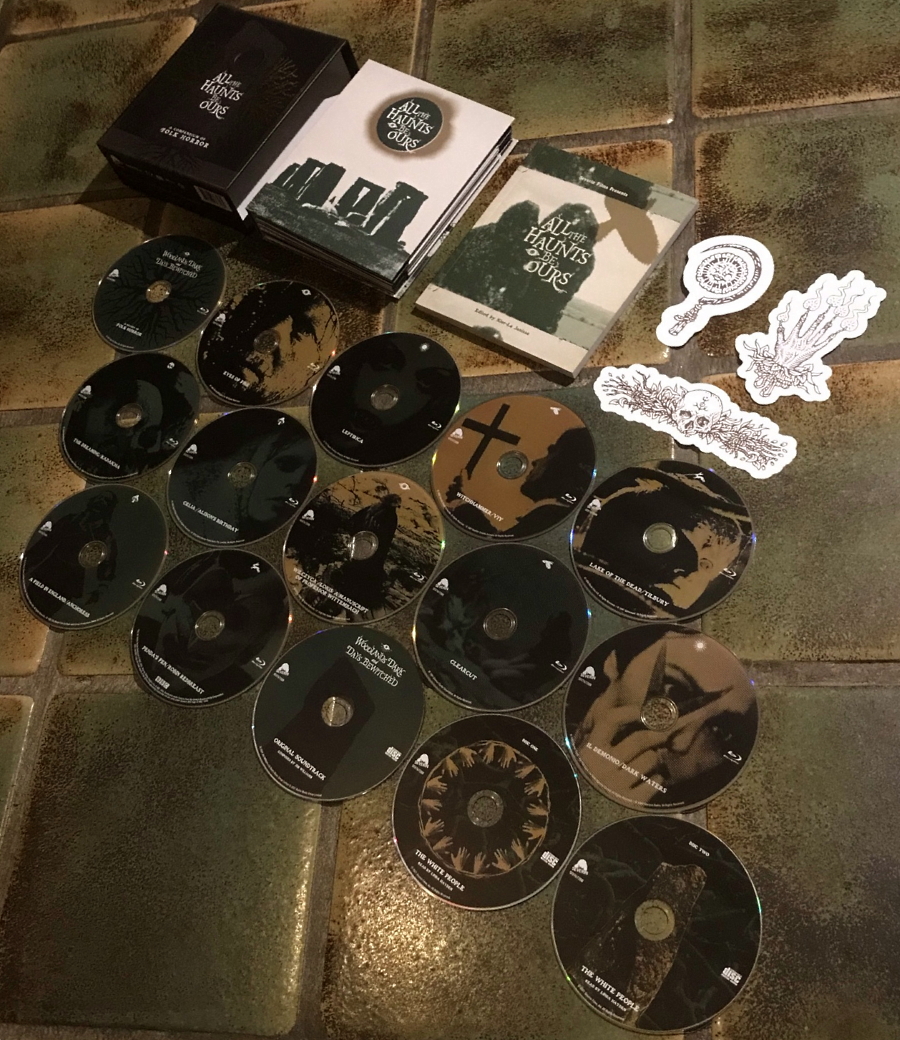 All contents in view. The films are:

I'm not going to list all the extras and shorts though, there are just too many of them! Oh, and you get some stickers too. 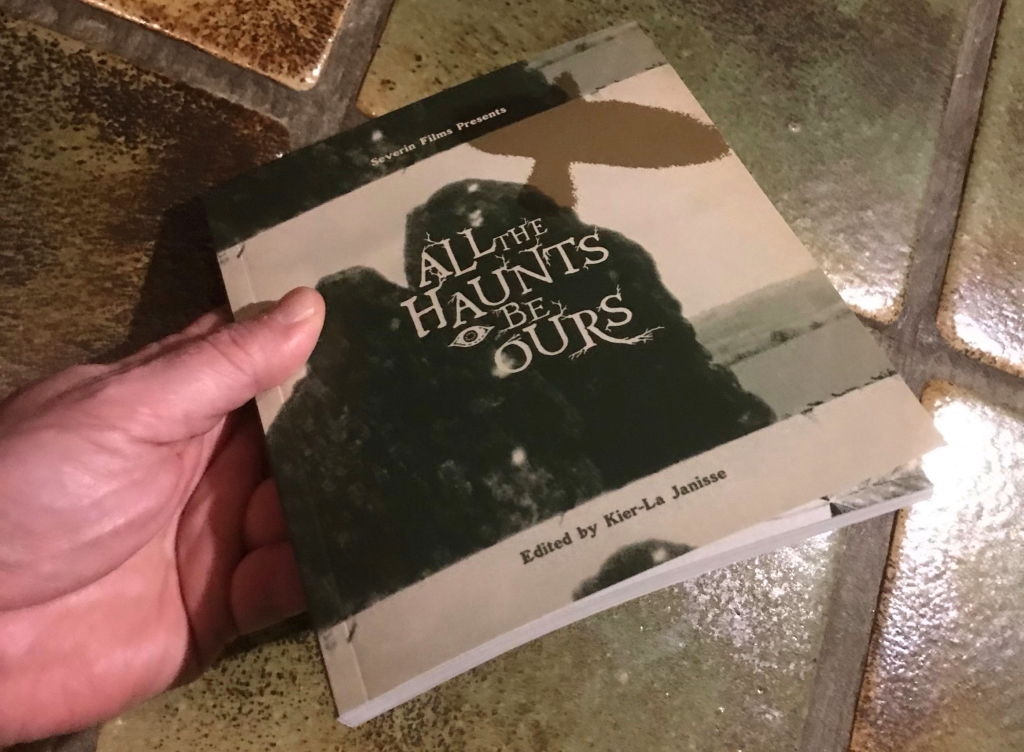 The book. It's over 150 pages thick and curated by Kier-La Janisse herself. 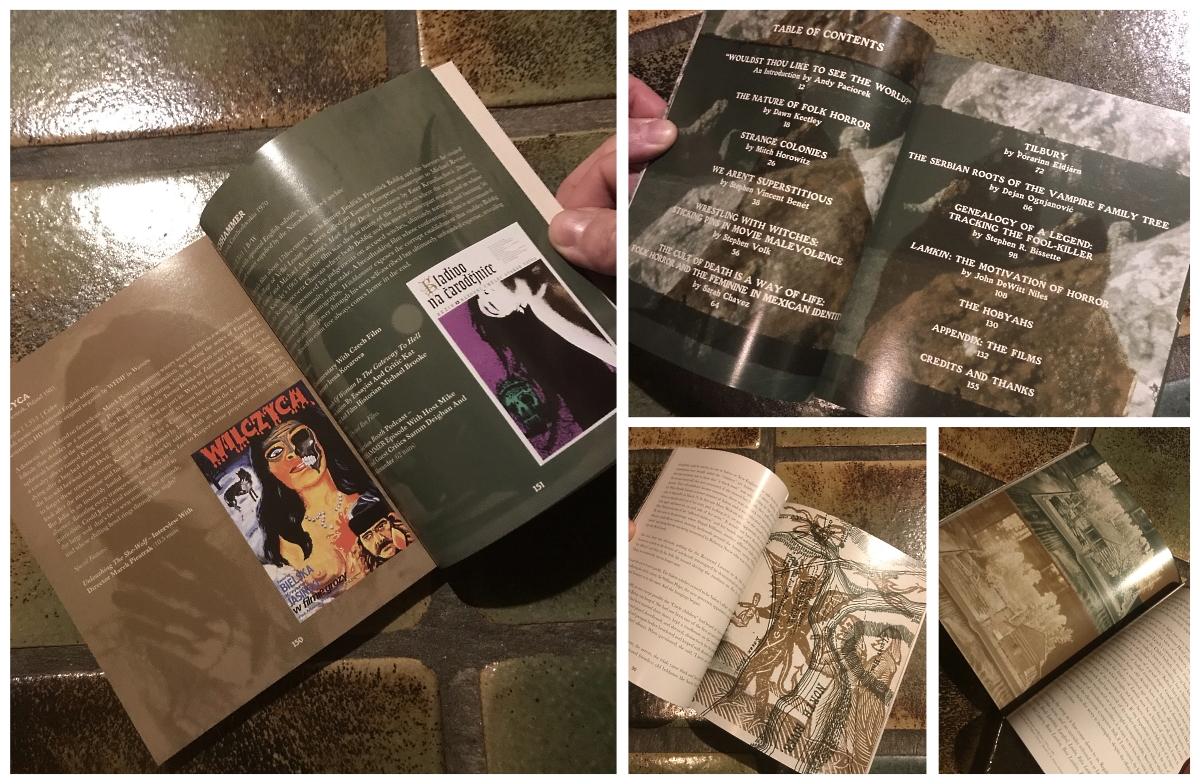 In it, there are essays on folk horror, witchcraft, cinema... extensive descriptions of all the movies, artwork... it's great! 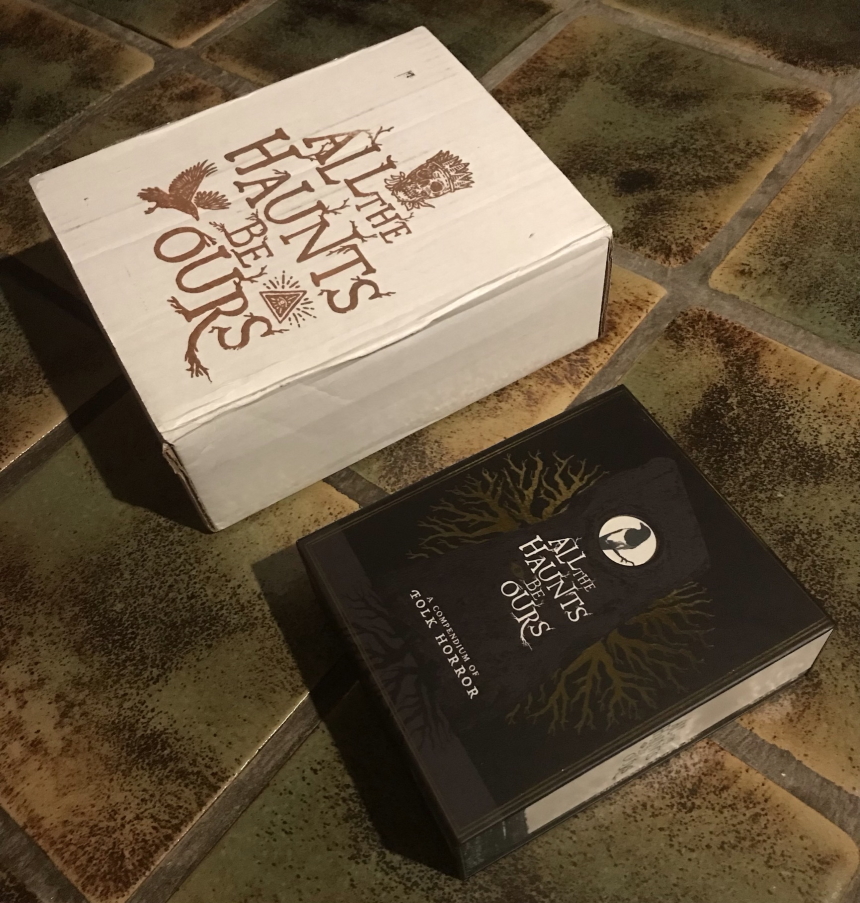 Even the cardboard box in which this set arrived was decorated. Normally I toss these away but this one, with its hand-stamped front, I will keep. 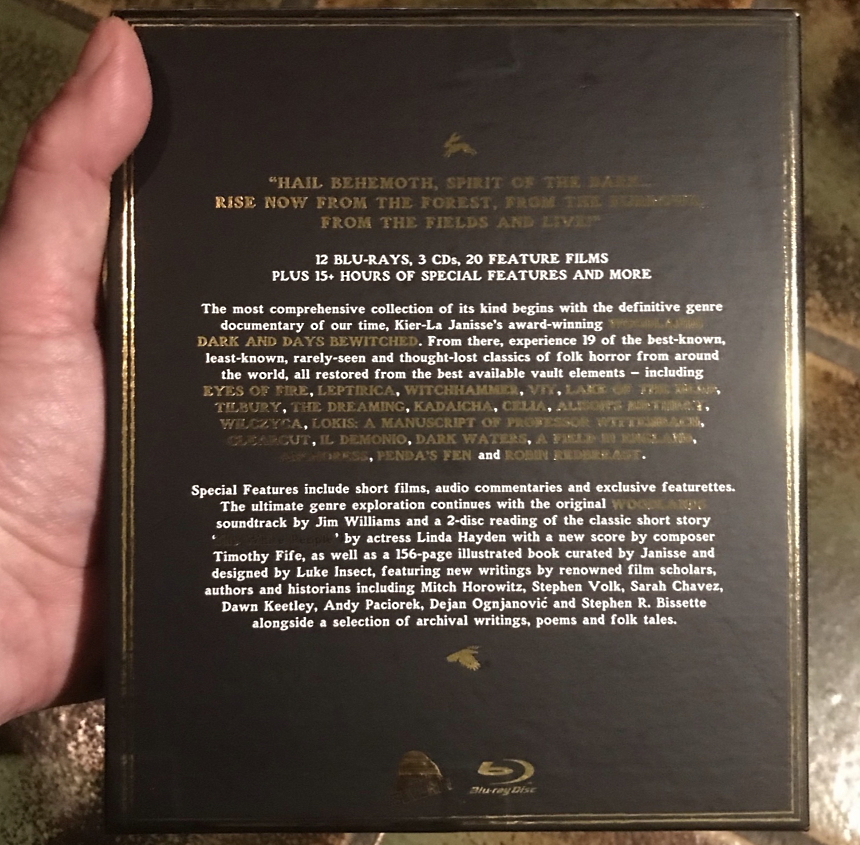 The (back)end of yet another great Severin boxset. What will they think of next?