Review: A FIELD IN ENGLAND, A Terrifying Headtrip Into The British Countryside 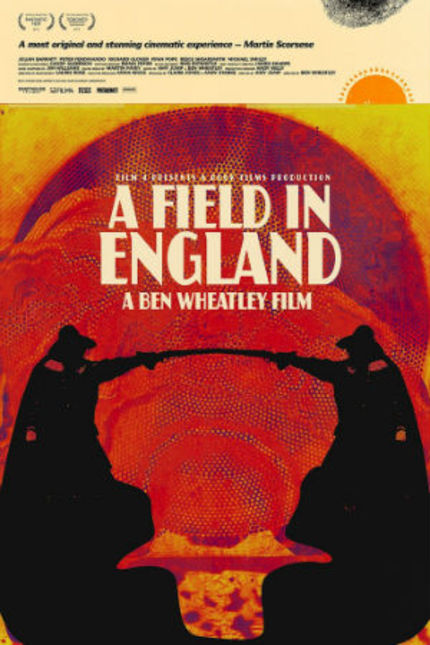 Bold, beautiful and utterly bonkers, Ben Wheatley's A Field in England is a mind-bending monochrome masterpiece likely to alienate as many as it seduces with its surreal visuals and delightfully deranged performances.

As a fan of director Ben Wheatley since his debut, Down Terrace, I have been increasingly encouraged and invigorated by his subsequent efforts, Kill List and Sightseers. His latest offering, A Field In England, is again a notable step forward, but in a direction that may not sit well with unsuspecting mainstream audiences. It's a project that seems to suggest Wheatley has won the confidence of his investors, or at the very least, found a boldness within himself to attempt something that is not only different, but an experiment in filmmaking that tests the limits of cinematic storytelling, while simultaneously celebrating some bygone highlights of British Cinema.

A Field in England is a period piece, set during the British Civil War of the 1640s, shot in black and white in a single outdoor location (as the title suggests). Reece Shearsmith (familiar from his work in TV's The League of Gentlemen) gives a revelatory performance as Whitehead, a deserting Cavalier, who teams up with a group of Roundheads after fleeing the battle, and together they head for a nearby tavern. En route they encounter a mysterious alchemist (Michael Smiley) searching for gold, and are drawn into a complex and increasingly terrifying power struggle that sees them plunge headlong down a psychedelic rabbit hole.

Plotwise, that's about all there is to A Field in England, but its real strengths lie in the demented mood it creates through audio-visual experimentation, fuelled by the characters' indulging in magic mushrooms when already in a state of fear, disorientation and cowardice. The result is easily Wheatley's most ambitious and challenging film to-date, both for him as a filmmaker and for his audience.

The director is clearly influenced by earlier standards of British horror, including Michael Reeves' Witchfinder General and the works of Ken Russell, most notably The Devils, but also Altered States. Wheatley has also acknowledged Shindo Kaneto's fantastic Japanese horror classic Onibaba as a specific touchpoint for cinematographer Laurie Rose, and its ocean of tall grass that provides both shelter and constant threat for the film's protagonists is clearly echoed in A Field in England's visual style.

The film is also noteworthy for the unique manner in which it was distributed in the UK [in the summer of 2013]. In a first-of-its-kind experiment, the film was made available in cinemas, on DVD, Blu-ray, VOD and screened on cable channel Film 4 all on the same day, allowing audiences to choose how they came to the film. Unsurprisingly, A Field in England plays best on the big screen, with a power sound system to add heft to James Williams' equally psychadelic score, but it is reassuring to know its place in British film history is secured, even if only for its pioneering distribution model. 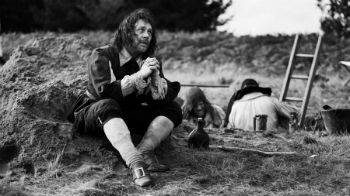 Fans of Wheatley's work and British television in general will recognise many of the film's cast, especially Michael Smiley (Spaced, Kill List) who cuts an intimidating figure as the mysterious O'Neil, orchestrator of this circus of mindgames and terror. The familiar visage of Julian Barratt (The Mighty Boosh, Nathan Barley) can also be glimpsed in the film's opening minutes as Whitehead's master. However, it is Shearsmith who deserves the accolades here, more than holding his own in a rare starring role. A character never in control of the events that have enveloped him, Whitehead is a picture of desperation throughout, until he inevitably collapses into psychosis. One scene in particular, on its surface little more than a man stepping out of a tent, is a hauntingly delirious image made horrific by Shearsmith's incredible performance.

Unlikely to receive the widespread acclaim that has been rightly heaped on Wheatley's previous output, A Field in England is nevertheless the director's boldest film yet, and an experimentation ripe with sublime moments of humour, horror and hallucination, accompanied by an eerily psychotropic audio odyssey. The result is one of the best and bravest British films of the year.

Review originally published during the Toronto International Film Festival in September 2013. The films opens in limited theatrical release in the U.S. on Friday, February 7, via Drafthouse Films. It will also be available to watch via various Video On Demand platforms. Visit the official site for more information.

A Field in England