SXSW 2021 Review: WOODLANDS DARK AND DAYS BEWITCHED: A HISTORY OF FOLK HORROR, An Expansive Examination Of An Evergreen Subgenre 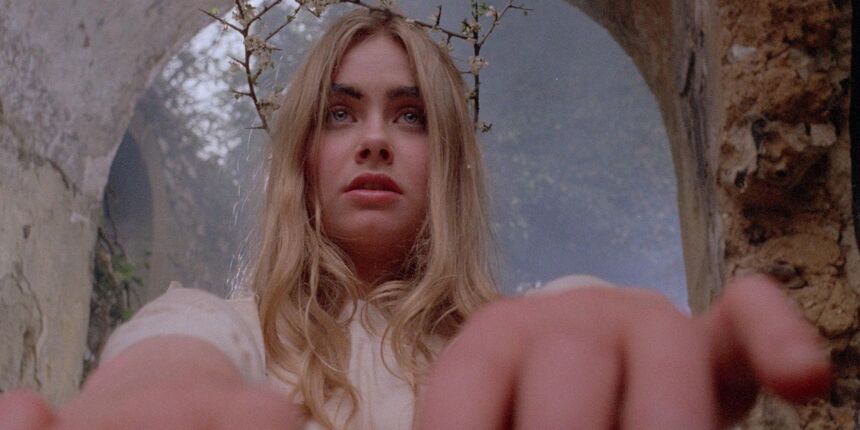 An epic and sprawling investigation, dissection, and contextualization of the cultural impact of folk horror in cinema, first-time feature director Kier-La Janisse's Woodlands Dark and Days Bewitched: A History of Folk Horror is an outstanding achievement in the academic treatment of genre filmmaking. Clocking in at nearly two hundred minutes, the film attempts to crown itself the May Queen of comprehensive examination of the topic, and with over a hundred films and more than fifty interviews addressed, it's fair to say that this is the unquestioned champion.

Beginning with the holy triumvirate of The Blood on Satan's Claw (P. Haggard), Witchfinder General (M. Reeves), and The Wicker Man (R. Hardy) to set the scene, Woodlands Dark and Days Bewitched delves deeply into the well of folk horror, examining not only the film's themselves, but also the reflexive impacts of the contemporaneous society on the work and the work on the viewer.

But that's only the beginning of the story, as the documentary plumbs the seemingly inexhaustible canon of folk horror around the globe to examine not only the films themselves, but also the ways in which they connect people to their own history, the histories of those whose lands they inhabit, and the ways these stories are simultaneously culturally unique to their land of origin and yet still speak to shared human – and particularly colonial – experiences.

It would be an impossible and ultimately uninteresting task to attempt to catalog each of the films, books, television programs, filmmakers, experts, critics, authors, and artists that Janisse has gathered in this exhaustively researched effort, but rest assured, you'll want to have a notepad or two handy while watching to jot down things to explore. While cleverly portioned into chapters to help assuage those who might feel intimidated by its hefty run-time, I think it's fair to say that the film divides roughly into thirds based on origin.

The first third of the film is devoted to what many would consider the classical folk horrors, those originating in the UK, like the three mentioned above. Britain certainly deserves significant exploration based on those three films alone, but add in dozens of other features and TV programs, as well as an English writing tradition that goes back hundreds of years with pre-Roman history going back even further and it's easy to understand why this was ground zero for folk horror.

Though it was popularized at the tail end of the '60s as evidenced by the above-mentioned films, folk horror was a staple of British households long before that. The documentary explores how these films addressed modern concerns with seemingly ancient history, and even minute is more fascinating than the last. By gathering interviews from not only folk horror and cinema experts, but also the filmmakers when possible (Haggard and the late Robin Hardy make appearances, though sadly Reeves left this mortal coil shortly after Witchfinder General was released in the late '60s), Woodlands manages a smooth convergence of points of view on the material, giving the audience a more full understanding of the work from all angles.

From Britain, the film moves on to the United States, a young nation seemingly deprived of much of a folk past until one explores even an inch beneath the surface. From exploring the traditions that migrated from the old country in films like The Witch (R. Eggers), to debunking the ubiquitous myth of the “Indian Burial Ground” a la Poltergeist, Amityville, etc., Woodlands gives American/Canadian folk tales their due by once again examining the cultural and political origins behind the creation of these tales and asking why they remain so readily accessible as sources of fear and confusion. Especially significant is the inclusion of numerous contributors from the Native/First Nations and African-American communities to help tell their own stories and provide unique cultural context.

The final, and perhaps most interesting segment is concerned with folk horror around the world. While the films aren't quite as easy to find or as well-known, they are certainly no less interesting. Janisse employs local experts, filmmakers, and cultural critics to discuss the folk influenced terrors of Asia, Europe, and Latin America, for the first time giving them their due as being as important to the genre as their English-speaking brethren. Many of these films, particularly those hailing from the former USSR and eastern Europe, were real eye openers, and having local experts to help contextualize their significance was an exceptional privilege.

Far from a dry, monotone recounting of film after film, Woodlands Dark and Days Bewitched is a lively jaunt through the genre, replete with clips from both well-known and (more interestingly) obscure films and television as well as being punctuated with elaborately creepy animations from Zena Grey, Brendt Rioux, & Ashley Thorpe, and collage work from Winnipeg's iconoclastic Guy Maddin (My Winnipeg, Brand Upon the Brain!). Add to that poetic readings from Witchfinder General's Ian Ogilvy and Blood on Satan's Claw's Linda Hayden, and the result is a fascinating and engrossing experience that never once overstays its welcome.

Hardly content to simply dissect each film in isolation, Janisse and her many gathered experts do an exceptional job of creating a clearly interwoven tapestry of mutual and intersecting influence between these works, creating an overarching narrative that explores and helps to explain not only the how, but also the why of their existence and continuing popularity. It's the kind of creative undertaking that populates much of Janisse's work as an author and editor, perhaps most famously of the pioneering genre film tome, House of Psychotic Women: An Autobiographical Topography of Female Neurosis in Horror and Exploitation Films. Much like with that work, Janisse finds a way to connect each disparate element to the next in a way that makes each idea significant and creates a whole far greater than the sum of its parts.

In short, the only way Woodlands Dark and Days Bewitched could be improved upon is if there were simply more of it. Though seeming unconstrained by conventions of typical documentary runtimes, the film – even at one-hundred-ninety-three minutes – still feels as though it has room to stretch in certain directions. Genre film documentaries often find themselves a bit too in love with themselves and their subject to look at them with an objective eye, but it is Janisse and her panel's critical assessments that make Woodlands worth seeking out immediately. Astounding.