Ben Wheatley Talks A FIELD IN ENGLAND, Destiny, And His Characters

I first became aware of Ben Wheatley when I was assigned to write an essay on his film Down Terrace (2009) for Magill's Cinema Annual.

What struck me while watching it was how carefully balanced and powerful it was and how impossible to pin down. It told a story and followed the characters through whatever they did with little attempt to invoke genre for it's own sake. Yet it was rife with things that invited genre comparisons and ended on a note that was pure, ghastly darkness. Throughout his subsequent films, I have encountered that same quality over and over again, marking Wheatley as a creative entity of sure footing.

But his fourth feature, A Field In England, is a film of monumental surreality. To watch it is to encounter a great cast, perfectly utilized within a project that pushes the boundaries of how to tell a story even as it evokes the great counter culture cinema of the 1970s. Then as now ,Wheatley remains a director to watch. Not watch as in up and coming, but watch as in watch everything. I caught up to him at this last year's Fantastic Fest for this interview

ScreenAnarchy: Your films are often about families and individuals attempting to control their destiny, but there's always something, usually some institution, that prevents them from figuring out how until it's too late.

Ben Wheatley: I guess I'm drawn to that because it seems like such a core part of the human experience, of even being alive. We deal with being part of families, we deal with being part of society, and from where I sit in my town in England, those things can seem very hard to tell apart sometimes. The state can be very much like a family in the worst sense, mean, sort of vindictive and stupid. It's hard to get your bearings.

Do you think your characters are forced to act in the extreme ways they do to try and survive?

I think the characters in my films aren't entirely unsavory. I'd like to meet the person who feels they are better than any of those characters. That's a real blindness. They're contradictory in the way we all are. We all do bad things. Especially when you consider the inner life we lead and the emotional damage and psychological damage we cause to one another.

But it takes place in such banality. The suburbs, run-down little villages, etc. And you always have all these mundane details that you use to develop characters.

Yeah, life is full of pauses and slownesses and repetitions, but inside we're often dealing with extremes. And that paradigm sometimes shifts. We can have a very complex family problem to solve but experience a sense of simple clarity. Striking a balance there is what I hope makes my films feel real. I want to tell real stories in that sense, even if some of the things that take place seem extreme. 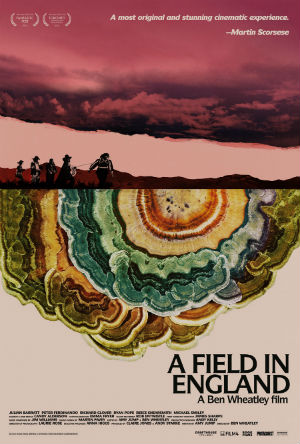 Getting back to this idea of judgment. You, or at least your films, do judge your characters pretty harshly. In DOWN TERRACE, the worst of the worst people aren't the ones who fit the criminal stereotype, they're the ones who sit back and watch and learn and reveal themselves to be willing to do anything to achieve their criminal goals. The ones without restraint. In A FIELD IN ENGLAND, the idea of trying to be one's own man, is painted in very dark overtones.

When I was young I used to draw a lot of comic strips. And I showed one to my mother's boyfriend. It was about this murderer with these evil tiny plastic hands and a sort of clown mask. He would jump down on people and kill them. When he was done looking at it, he looked at me and said, "This is not the scariest thing you can think of. The scariest thing...is a man. Just a man."

There is a little judgment in there. In Black Swan, the book, a main theme is how programmed we seem to be for narrative. We create all these retrospective stories to simplify what we don't understand or don't want to face. My characters are definitely in the process of writing their stories to suit themselves. It seems to me the worst mistakes I've ever made have been when I'm stone-cold sober. We can always blame an outside influence, but the badness is there.

The world's shortest horror story is, "The last man in the world sat in a room. Suddenly there was a knock at the door." It begs the question of whether you see your characters as prime movers in shaping their destiny or more as victims.

You're both all the time, aren't you? The bully and the victim are the same person, really. The bully was bullied, the person he bullies learns to bully. It's a pressurized circle. It's life and when enough pressure is applied, you make a decision too quickly, you write someone or their needs off. You are guilty, but you're also panicked. There isn't a whole lot of intent there, is there? For someone else to win, someone must lose. Does everyone else need to lose? It's kind of Darwinian. Winner takes all, winner eats all.

He thinks he gets to eat it all, but he himself is usually eaten by someone else. Meaning has to come from the things these people lose. They lose families, their own humanity. They lose their way, their sense that they are headed somewhere where people do something other than kill and eat each other.

I think that you can never escape the need to solve your own problems. I have this fundamental mistrust of authority, governmental, religious, etc. The most basic problem is how to define yourself. The shackles have to go, but you have to make sure they are indeed shackles. We toyed with the idea of showing that the people in A Field in England were related to the people from Down Terrace and Kill List. The idea that you can never escape where you're from.

A Field in England opens in limited theatrical release in the U.S. on Friday, February 7, via Drafthouse Films. It will also be available to watch via various Video On Demand platforms. Visit the official site for more information.