Now Streaming: THE MAN WHO SOLD HIS SKIN and Other Oscar Nominees 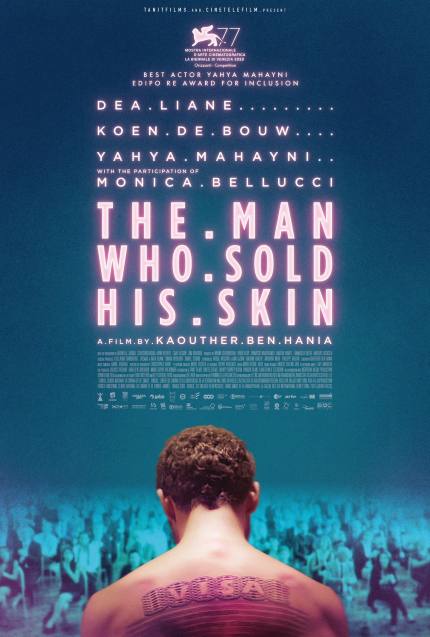 With each passing year, the Academy Awards accumulate more baggage -- some undeniably good, some undeniably bad, much undeniably irrelevant -- yet every year I find myself sucked back into orbit around the nominees, the awards show, the winners, and the inevitable slings and arrows that follow the surprises and snubs.

As the managing editor of a site that is primarily devoted to genre fare, especially indie films and international features, I endeavor to keep my personal preferences on the back burner, but that inevitably seeps out, as evidenced here in this article, intended to round up nominated films that have made their way to one streaming service or another.

We link below to reviews that have been published by our writers, as well as personal notes/short reactions on a few of the films that we haven't seen and/or reviewed yet.

I'm not sure how it is that the Hulu streaming service ended up with all the Academy Award nominees for Best International Feature this year, but it has made it more convenient (and economically feasible) for me to cover and catch up with those titles. (And the service even provides a handy link for all the nominees now on Hulu.) As to the show itself, which begins on Sunday, April 25, at 20:00 EST, it will be available free on ABC News Live via The Roku Channel, which means you don't have to buy an antenna during a pandemic to watch, you just need a television of some sort and a Roku.

BEST INTERNATIONAL FEATURE
Another Round - reviewed by Kurt Halfyard -- Now on Hulu
Better Days - covered by yours truly -- Now on Hulu
Collective - covered by yours truly - Now on Hulu
The Man Who Sold His Skin - Now on Hulu
A Syrian refugee, desperate to reunite with the love of his life, who has now married someone else (?!), agrees to a famed artist's request to tattoo a visa on his back and show it off on public exhibition. To be frank, I've only watched the first 45 minutes; it's very stylish but tough sledding to get past the romantic yearning that may be unrequited without much else to recommend it beyond outrage at the wealthy. Probably not for me.
Quo Vadis, Aida? - reviewed by Dustin Chang - Now on Hulu

BEST PICTURE
The Father - Now on VOD
Anthony Hopkins gives an exceptional performance in a very clever picture, written and directed by Florian Zeller.
Judas and the Black Messiah - reviewed by Jim Tudor - Now on VOD
Mank - Now on Netflix
David Fincher's elegant visuals complement the top-flight performances by Gary Oldman and Amanda Seyfried. It's a cinephile's dream and/or nightmare.
Minari - reviewed by Dustin Chang - Now on VOD
Nomadland - reviewed by Shelagh Rowan-Legg - Now on Hulu
Promising Young Woman - reviewed by Mel Valentin - Now on VOD
Sound of Metal - Now on Amazon Prime
Riz Ahmed is very good as a stubborn musician who gradually opens up to new possibilities.
The Trial of the Chicago Seven - Now on Netflix
The usual Aaron Sorkin shtick, this time in the guise of a dynamic civics lesson.

BEST DOCUMENTARY
Collective - covered by yours truly - Now on Hulu
Crip Camp - Now on Netflix
The title may sound offensive, but very appealing characters who just happen to be disabled hold attention until the film develops into something else entirely unexpected.
The Mole Agent - covered by yours truly - Now on Hulu
My Octopus Teacher - Now on Netflix
Time - Now on Amazon Prime
An enduring quest for justice is handled adroitly and artfully by filmmaker Garrett Bradley.

Do you feel this content is inappropriate or infringes upon your rights? Click here to report it, or see our DMCA policy.
Academy Awards 2021Oscar nominees