Tom Holland and Chris Pratt voice elf brothers who seek to reunite with their long-gone father. 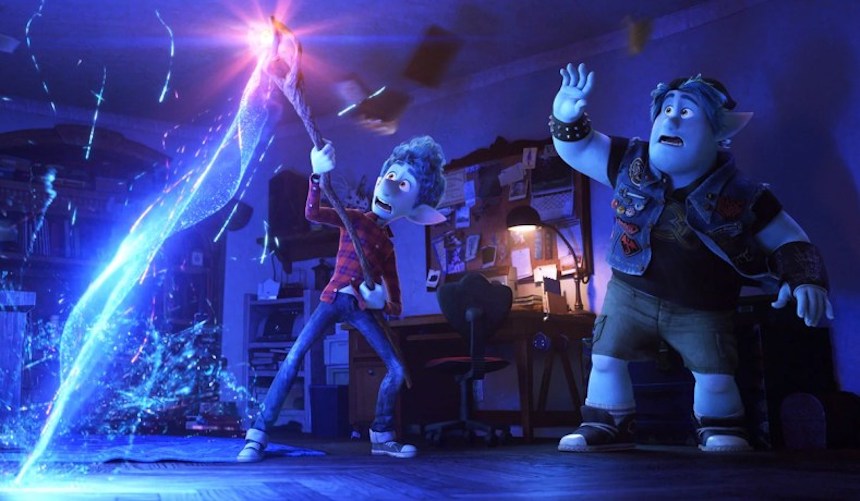 Over a quarter of a century and 22 films, Pixar Animation Studios -- owned and operated by the Disney-Industrial-Complex since 2006 -- has continually rewritten the limits of the possible, redefining not just the animation genre by continuously expanding proprietary software, but commercialized pop culture at large via its stable of merchandisable properties.

From its first, feature-length film. Toy Story, through its latest, Onward, Pixar has mined relationships and interactions to deliver emotionally powerful, meaningfully poignant films. Even when Pixar has stumbled -- chiefly the Cars series or one-offs like A Bug’s Life -- Pixar’s commitment to providing moviegoers with catharsis of the emotional, tear-stained kind has never wavered. And while Onward isn’t likely to join the Toy Story series, The Incredibles, Wall-E, or Inside Out as top-tier Pixar, it’s not far behind, mostly due to one of the most dramatically and thematically satisfying endings and denouements in Pixar’s collective output.

Both Ian and their mother, Laurel (Julia-Louis Dreyfus), dismiss Barley’s obsession as unequal parts annoying and childish, but generally harmless. Laurel seems to recognize that Barley’s fixation with a mythical past likely stems from the premature death of Ian and Barley’s father. (Barley has a few scattered memories of his late father; Ian has none.)

With Ian celebrating his 16th birthday, Laurel decides its time to give Ian and his brother their late father’s parting gift, a wooden staff, a so-called Phoenix stone, and an ancient parchment containing a mystical ritual. Once read, the ritual will give Ian and Barley 24 hours with their resurrected late father. The ritual partially works, not when Barley tries, but later when Ian does. They get exactly one-half of their father, the bottom half. (It’s easily one of the most bizarre and to be fair, most original ideas in Pixar’s 25-year history.)

The half-success, half-failure sends Ian and Barley into literal quest mode: They have less than 24 hours to find a new Phoenix stone and try the ritual again. Barley’s extensive D&D (Quests of Yore) knowledge gets them on their way, first and foremost to find the fearsome Manticore (Octavia Spencer) and the one-of-a-kind map in her possession.

Filled with familiar side trips, side quests, and curses typical of D&D-inspired tabletop games -- partly an excuse to pad out the running time to feature-length, partly to include obligatory action scenes/set pieces -- Onward rumbles towards its seemingly predictable reunion between Barley, Ian, and their father, albeit through some of the least inventive, least imaginative character designs in Pixar’s illustrious history. With his scrawny frame, big ears, and bulbous nose, Ian could have stepped out of one of DreamWorks Animation’s lesser effort.

Onward ultimately turns on the Lightfoot family reunion, a wish-fulfillment fantasy universal in scope, delivering a mix of expected and unexpected emotionally resonant beats, but it also takes more than a few jabs at the equally predictable commercialization -- corporate capitalism at its finest -- of anything and everything in Onward’s magic-free, mundane world. Of course, it’s an ironic, perhaps cynical take for Pixar to critique and criticize exactly what Disney does to great profit in the real world on a regular basis, yet it’s still an essential, worthwhile message to convey to jaded and not-so-jaded audiences and the intellectual property they embrace and love, often with little or no qualification or reservation.

Or, of course, it can be safely ignored outright, especially when the overarching message about life, loss, and family (trite, but no less true) will have a greater, deeper, longer-lasting effect on moviegoers.

Do you feel this content is inappropriate or infringes upon your rights? Click here to report it, or see our DMCA policy.
animationChris PrattJulia-Louis DreyfusOnwardPixarTom Holland