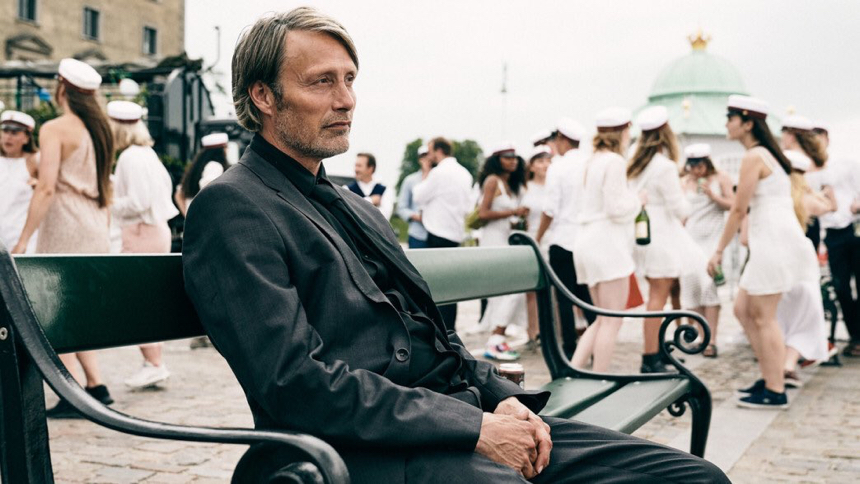 Thomas Vinterberg's latest comedy of manners is as bourgeoisie-punk as ever. He leaped onto the global stage, along with Lars von Trier, with the collaborative manifesto Dogme95, and its first film Festen (The Celebration), which re-wrote the design rules of conventionally lit and produced cinema, via an upper-crust family meltdown. Many years, and many films, later, he has made an escapist comedy about alcohol as a life improvement strategy. A venture of this kind, under even the best talent, would be fraught with certain perils - given the number of people who have had their own personal brush with addiction, or suffered the results of family or friends and their predilection with overdoing the drink.

And yet, the director's practiced hand with ensemble casts is on full display with Another Round, or the more blunt Danish title of the film, Druk (Drunk). Four middle-aged teachers, the youngest celebrating his 40th birthday early on in the film, come up with the scheme to go through life, their domestic and professional existence, with a steady blood alcohol level of 0.05%.

They buy breathalyzers and take study-notes on the results. This places an academic veneer onto their foolhardy, but legitimate, even earnest, desire to engage with the world as they did in their youth. A more carefree, spontaneous, and damn the consequences attitude might do any family man a little good, no?

Like a good party, things are planned out on the sly, a select people (here the brotherhood of high-school pedagogy) are invited, and for a time, things move along quite swimmingly. Their teaching, which was for years stuck in a doldrum routine, that the students, not to mention spouses, clearly have picked up on. All of this is immediately given a big electric juice with their new muse: constant drinking. Engagement, euphoria, ensues.

But like many a party, it is decided that things must be taken to the next level. There are consequences. Denmark is a country built with many, many traditions built on alcohol, from the teenage graduation rituals depicted at the beginning (and end) of the film; the first, a relay race with a case of beer around a serene lake, which involves penalties for puking. But really, much of the western world has crafted lofty narratives of froofy label copy on the bottles of wine, spirits and beer. This puts a civilized, even high-brow, spin on the humanity's oldest social lubricant.

Vinterberg re-assembles many of his past collaborators, including Thomas Bo Larson, Lars Ranthe, Magnus Millang, and while there is no sign of Ulrich Thomsen, Mads Mikkelsen is the central axis on which thinks rotate. Dizzily. The only significant female role in the film, as Another Round is decidedly a film about the male ego, hubris and absurdity, is Maria Bonnevie, who a few of you may remember from Christopher Boe's criminally under-seen Reconstruction.

She is, on one hand, the cinematic cliche of the put upon wife (make what you will of her job here also as a nightshift nurse) of Mads' characters struggling marriage, and mother of his two teenage boys. On the other hand, she has secrets of her own. The world, and its human occupants, are almost never what you might expect. The film lets none of the characters, even the students or school administrators, off the hook, even as it does not want to bring the audience down too far with things. Just have a drink, it says. The source of, and solution to, so many problems.

Mads Mikkelsen has been a stalwart on the global blockbuster scene for about a decade. From his Bond villain in the reboot of Casino Royale, to a Star Wars father figure, and even Hannibal Lecter in the character's prime. He, of course, brings a lot to those roles. But nothing lets him off the chain like his cabal of Dane directors: be it Anders Thomas Jensen's Adam's Apples, or Nicolas Winding Refn's Pusher or Valhalla Rising, or Vinterberg's own The Hunt.

Here, Vinterberg squeezes a humble miracle of a performance from the star. One that runs the gamut of subtle and over the top, without ever taking away from the rest of his ensemble. Plausibility, possibility, self-deception, regret, vigour, desperation, and being on the verge of a phoenix-like rebirth is all written across his face lined with handsome five o'clock shadow. But when it comes to pulling heartstrings, Thomas Bo Larson's relationship with one of this little league footballer students packs a wallop on its own. Even to this cynical, sports agnostic film writer.

Any film that concludes with an unbridled dance routine, from O Lucky Man to Takeshi's Zatoichi to The 40 Year Old Virgin, is good entertainment almost regardless of what preceded it. This is no different insofar as Another Round wants to send the audience bouncing home with joy. I am already anticipating well, er, um, another round with this one. It is unabashedly a crowd pleaser. And there is nothing wrong with that: Skål. Cheers. Bottoms up.

Do you feel this content is inappropriate or infringes upon your rights? Click here to report it, or see our DMCA policy.
AlcoholAnother RoundboozeComedyDenmarkdrinkingDrukdrunkLars RantheMads MikkelsenMaria BonnevieTeachingThomas Bo LarsenThomas Vinterberg

More about Another Round