Review: SOUL, What Everybody Wants 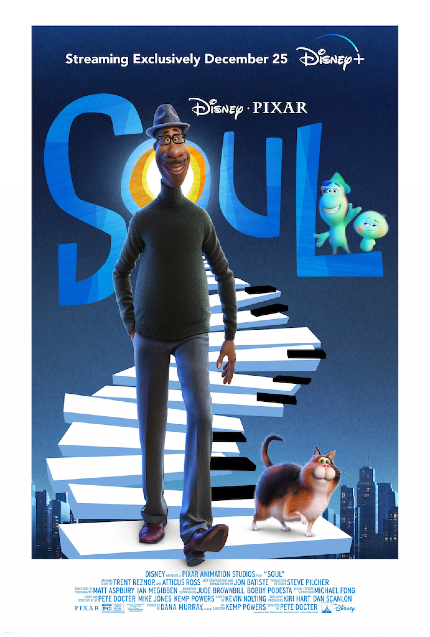 Once again, Pixar plunges into mainstream religious and spiritual beliefs.

Soul
The film is now streaming exclusively on Disney +.

More than ten years ago, writer/director Pete Docter poked at the meaning of life in Up, in which an older gentleman endeavors to redefine his closing years. At the time, our own Kurt Halfyard acknowledged in his review that Pixar as a company is "aware of what has come before, and honor it, but are happy to take their stories to new places with new and interesting tools (both technology and storytelling)." And so it's notable that Docter, as a filmmaker, has pursued existential questions in his succeeding films Inside Out and now Soul.

About Inside Out, our reviewer Jason Gorber wrote: "In so many ways this feels like a true passion project, a back-to-the-basics work that still feels very much like it's built upon all that's come before." I wasn't quite as enamored with the film, which force-fed psychological ideas into a bland formula that was fine-tuned for popular acceptance, avoiding some of the nastier implications of the premise by shifting responsibilities onto a single character.

And so it goes with Soul, which proudly features Pixar's first African-American protagonist, yet shovels him into a plot that is dependent upon old-school religious beliefs mixed with new-school modifications and even a dash of mysticism. It's kind of like a religious service intended for people who only attend one religious service annually. It doesn't feel like there is anything in the film that will offend anyone with even the slightest interest in the spiritual side of life, but neither is there anything that is particularly compelling about it.

Except for the animation, that is, which remains top-class and top-shelf and top-tier, even on a small screen. The details are wondrous to behold, and the imaginary inhabitants of the film's spiritual planes are designed to delight young viewers especially.

Directed by Docter and co-directed by Kemp Powers, the film follows middle-school teacher Joe Gardner (Jamie Foxx), who has long dreamed of a career as a jazz musician. He finally achieves his dream -- or at least another audition -- and then on the cusp of his big potential showcase, he dies.

Oops, what a bummer! As with Heaven Can Wait, Joe thinks a mistake has been made on his way to The Great Beyond, and so he kicks back, ending up as a mistaken mentor to woebegone 22 (Tina Fey), a soul who has resisted the idea of ever being born. The remainder of the story follows their wacky adventures as they seek the true meaning of life, as all who believe in a soul that exists apart from the body tend to do.

For those who believe that the soul is separate from the body, which is probably the majority of mankind, the film probably presents an agreeable experience, filled to overflowing with teachable moments. For those of us who do not share that belief, Soul becomes rather tedious as it implores its leading characters to accept its basic ideas and march along with everyone else.

So it's preaching to a mismatched choir that deserves a sermon that's more thoughtful and allows for greater individual interpretation than what is offered. But the animation is terrific!

Do you feel this content is inappropriate or infringes upon your rights? Click here to report it, or see our DMCA policy.
animationDisneyJamie FoxxPete DocterPixarTina Fey