The S. Craig Zahler penned reboot Puppet Master: The Littlest Reich - now out in theaters and available on VOD and Digital HD - goes back to basics with its setting: a bunch of people in a hotel become the potential victims of a group of murderous living puppets. That classic storyline traces back to 1989, when the original Puppetmaster came out; though this time Andre Toulon’s puppets are actually Nazis and crazier than ever.

Enter Tate Steinsiek, the new puppet and creature designer who, in collaboration with directors Sonny Laguna and Tommy Wiklund, managed to deliver some of the most memorable killings in the history of Charles Band and Full Moon Features’ iconic franchise. To find out how he did it, read on...

ScreenAnarchy: I’m wondering if you were already a fan of the PUPPET MASTER franchise and if it somehow inspired your work as an artist through their practical effects?

Tate Steinsiek: I was certainly a fan of the Puppet Master series before we did this film. I’ve been a fan since I was a kid, I would rent all of them all the time and just told my mom that they were Jim Henson movies so she wouldn’t get mad at me. It directly influenced me into moving into the field of special effects because I wanted to be able to create monsters like that, I wanted to create cool little creatures. My career has taken me through all sorts of different kinds of movies and it’s funny because I've always chased films like the ones I loved when I was as a kid, but they’re not made often anymore. Then, enter Cinestate, enter Fangoria Films; I found a company that only makes movies like the ones that I loved when I was a kid, which is why I’m such a blessed guy, to be able to anticipate that every single film you make with a company is going to be amazing is a really good feeling.

How was the process to create the new puppets?

We would start with design, drawings and rendering. For a lot of the puppets, we used 3D sculpting so we would sculpt them digitally, then print pieces and refine those pieces, detail them, and add to them. We did utilize some modern technology in getting these puppets symmetrical and robotic, feeling more like a carved piece of wood or metal than something that was made out of latex.

How fun was to refresh some of the classic puppets like Pinhead and Tunneler?

It was extremely fun! Just to get to hang out with them [laughs], to be sitting in a room with Blade, Tunneler, Pinhead and all of my friends from childhood, you know? It’s not often that you get to actually be around things that you’ve loved for so long. I’m lucky in that regard, when I worked in The Amazing Spider-Man, like walking out of the trailer with Spider-Man [laughs]. I was a huge Spider-Man fan, same with Puppet Master, so just having them hanging around my shop was quite the honor. 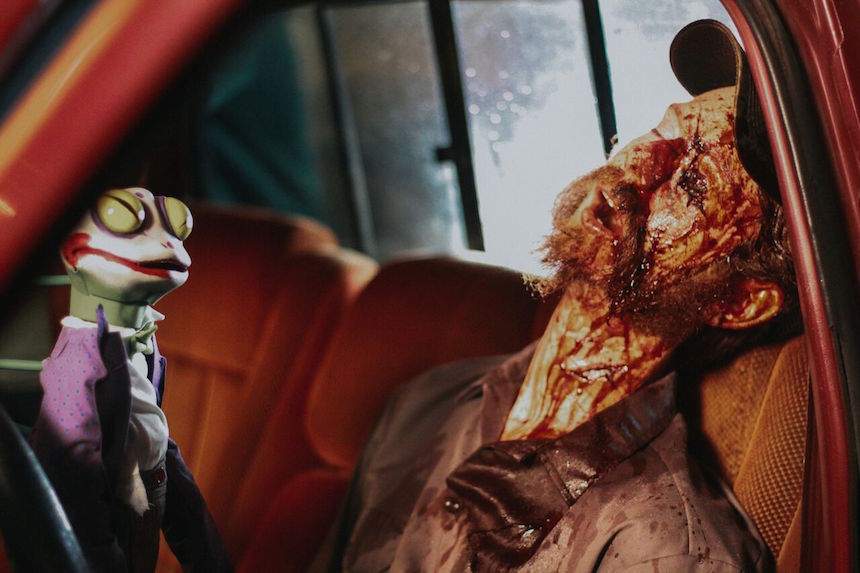 As far as having evil puppets killing people, this film is the craziest and goriest in the entire franchise. What did you think when you read in the script such demented sequences like the one with the pregnant woman?

Oh man, when I read the script I remember thinking “holy crap! This is a lot to pull off!.” And it was, it was difficult, it was a crazy shoot. And yeah, some of it is borderline traumatizing to watch, but that is the point. A lot of people are injecting a lot of modern climate issues into this film and I think that’s exactly why Zahler wrote it, it wasn’t an accident that the subjects matter in the climate. We just wanted to create something that sort of reminded you why you want to go to a horror film. Guys, let’s remember what a horror movie is, let’s remember why horror was invented. It was invented to shock, to not only stimulate your imagination but to disgust you and to cover you in blood and give you all these fantastic visuals that are not something that you see everyday. That’s why I love this film, it forces you to relax, like take it easy, watch it, enjoy horror, remember what it was like to be a kid and watch them and saying “shit.” We are here to remind you of how good it feels to be a 10-year-old kid watching a really crazy horror film, that is our job.

What was the greatest challenge to make the puppets come to life specially for these crazy scenes?

Finding a place to put the puppeteers, because we didn’t have the time to build any breakaway floors or double walls. There was nowhere waiting to hide the puppeteers, it was something that we had to get in there and figure out on the day, like, OK, here’s the scene, here’s the shot, this is where the actors go, now where you guys are going to hide? That was the greatest challenge, trying to figure out how to make these things move and where to put the people that make them move, but I think we did a pretty good job, we got pretty crafty, we figured out a bunch of stuff, and you don’t see any feet seeking out or any arms.

Then you had to work with Udo Kier [who plays Andre Toulon]. I talked to him and he said he had to went through a four hour process for the makeup. How was this experience for you and also the challenges to make the Toulon creature that we see at the end?

Udo was fantastic, first of all. I’m a big fan of Udo, I’ve watching him since I was a kid, so the chance to sit with him for four hours in makeup was unbelievable, such a cool guy, such a class act and just a consummate professional. We wanted the makeup to reflect his inner evil, we didn’t want it to just be an inside thing, we wanted his visuals to also disturb you, which I think we pulled off pretty well; he looks terrifying in that makeup. 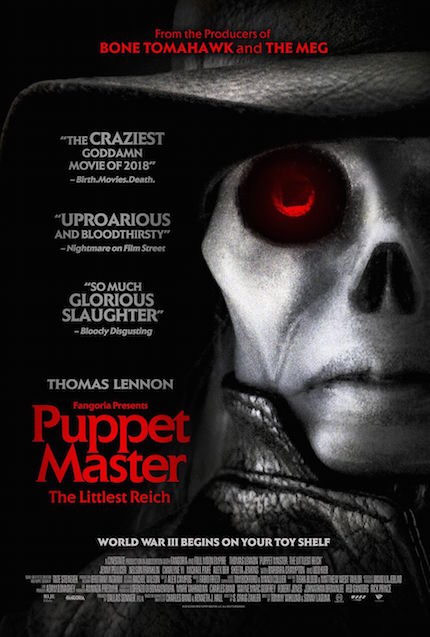 As far as the Toulon creature goes, that was a design that I came up with based on Zahler’s call outs in the script.

I was concentrating primarily on the puppets so I called up my buddy out in Hollywood, Wayne Anderson, and asked him if he had time on his schedule to sculpt this thing for me and he did, knocked out and made it absolutely beautiful.

That’s just a testament to what happens on a movie set: you are only as strong as your team, no one person can do everything themselves.

The point of a horror film is to shock, like you said, but some people right now are saying that this is politically incorrect and so forth. What do you think about that?

They’re right, it’s supposed to be, it’s not a big secret, it’s not like there’s anything underline or secretive about this film; it’s all in your face. I think it challenges people to ask, why are they calling something politically incorrect? Humans are humans, if you want to start getting into ethnicity, sexual preference and all of these things, and murder and who should be murdered and who shouldn’t, then I think that maybe those people are the ones that should take a look at themselves. Everyone is equal and everyone dies just the same, I can stab you, I can stab myself, I can stab anyone in the world and I guarantee you that something red is gonna come out. This forces you to take a look at the one aspect of horror that is and will always be the same, and that is we are going to butcher people. That’s exactly what we did and did it in a way that I think is really fun and invites the audience to just relax, have a laugh, enjoy a bunch of crazy little puppets genuinely just killing everybody [laughs], they’re not as discriminative as some might want to make you think.

Do you feel this content is inappropriate or infringes upon your rights? Click here to report it, or see our DMCA policy.
Charles BandFull Moon FeaturesPuppet MasterPuppet Master: The Littlest ReichS. Craig ZahlerTate SteinsiekUdo Kier