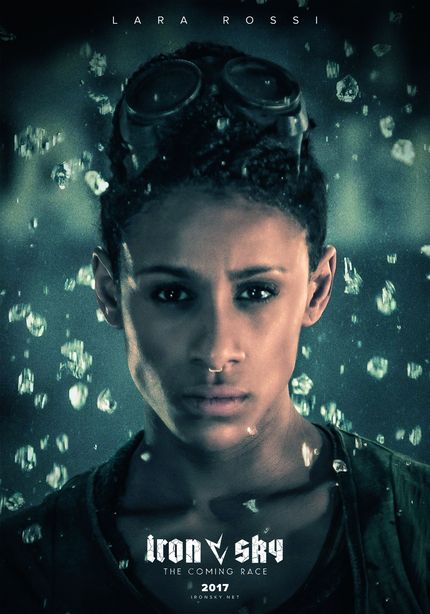 With the Moon-Nazi base crumbling and dinosaurs roaming the center of the earth humanity's last hope lies in one woman. Meet Obi Washington, the heroic figure at the center of upcoming scifi comedy Iron Sky: The Coming Race, who is now unveiled in a brand new character teaser for the film.

And with post-production now under way on the film the producers - no strangers to engaging with their fans - are taking the bold step of opening up a pair of rough cut screenings to their crowd funding supporters to take feedback on the edit process. And while test screenings are certainly nothing new to the industry these ones are unusual both in the fact that they are waaaaaaaaaaaay earlier in the process than normal - participants will be seeing the film absolutely stripped bare, before any of the VFX are laid in - and in that they are open to members of the public as opposed to the producers hand picking a select few friends and professionals as is normally the case.

The filmmakers of Iron Sky The Coming Race, a science fiction action adventure to be released in 2017 are showing the early rough cut of the film to fans for comments and feedback on 7th March in Berlin and 8th March in Helsinki. This is the first time in the history of cinema when tickets are being sold for rough cut screenings.

The heavily crowdfunded film production has been relying on fan feedback and participation throughout the production, and continues down the road with the rough cut screening. It's also part of the ongoing crowd funding effort of the heavy post-production process - the rough cut screenings are worth $150 for the fans on IndieGoGo crowdfunding platform (igg.me/at/thecomingrace).

"We're doing this film together with the fans, for the fans and want to offer them a chance to comment our doings during the whole production", explains director Timo Vuorensola. "We started out by sending the script to thousands of our fans, and improved it based on the feedback, and intend to do the same with the rough cut screenings.

"The early feed-back also gives us better understanding on positioning and marketing this film", producer Tero Kaukomaa says. "I wouldn't be surprised if we were to organize more of the rough cut screenings later this year, also in other markets."

Check out the new character teaser and the advance screening announcement below!