Notes on Streaming: REVISIONS From Japan, THE DEFECTED From Hong Kong 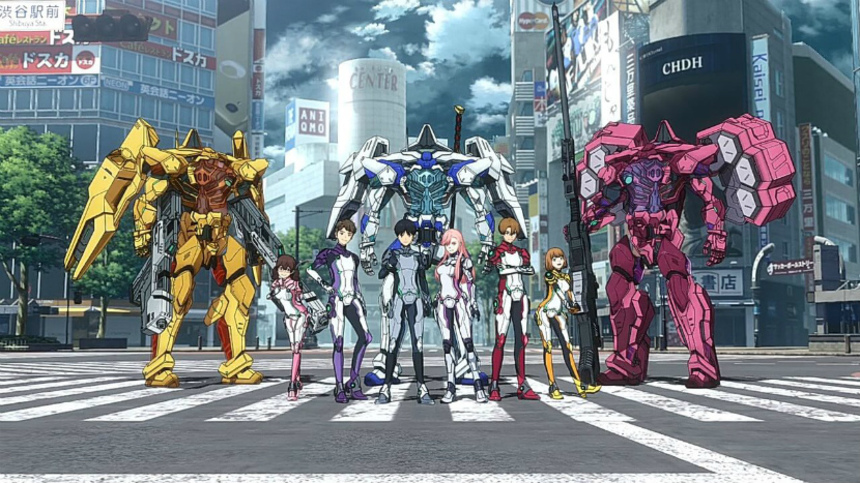 Over the past week, I slurped up Catch 22 on Hulu, which is more contemplative and rueful than Mike Nichols' wildly uneven big-screen adaptation, and Phoebe Waller-Bridge's caustically funny Fleabag on Amazon Prime, which is six episodes of brilliance. What did you watch?

I also watched multiple episodes of three anime series on Netflix: Baki, which is good if you love action; Ingress The Animation, a decent stab at adapting a mobile game, which was far more interested in mysteries and puzzles than in people. (Still, I was sufficiently intrigued to watch all 11 episodes). My favorite, however, was something that's possibly more designed for older children and adults.

Debuting last week (May 14), the brighter color palette suggests a more elementary tale, appealing to younger audiences, and, indeed, the first episode is mainly spent introducing five high-school students (three boys, two girls) who grew up together and now have a sibling-like relationship, bickering and fighting and smoothing things over. One of them, named Daisuke, has maintained his distance from his mates because he is convinced that he is The One Who Will Save Them All.

The inciting incident is explained succinctly, and it all comes true soon enough when the neighborhood where they all live -- the Shibuya ward in Tokyo, Japan -- is struck by disaster. Composed of elements that are personal faves, including time travel and monstrous robot-creatures who are not what they appear to be, the series won me over because of the empathetic way it develops the characters.

The teens themselves are reasonably authentic teens under stress (i.e., sometimes annoying, sometimes lovable). Beyond the team, however, time is taken to feature other characters as well, and to reveal their motivations and reactions. This is not a deep, necessarily, but I really enjoyed the combination of visceral actions and melodramatic reactions, which made it easy to become absorbed in the story.

Summing up: Twelve episodes in all; well-structured and easy to enjoy.

The Defected
Now streaming on Netflix.

Fresh off its premiere run on TVB, where it ran for 30 episodes from Monday through Friday, April 1-May 10, Hong Kong drama looks and feels quite solid. Primarily, it appears to focus on cops in one bureau in conflicts with the narcotics bureau as they both pursue the same criminal gang, all while their superiors are fighting with each other, and one is seeking revenge for the death of her police officer son.

Whew! I've only watched three episodes so far, but there is definitely plenty of melodrama to go around, along with a fair bit of action -- vehicular mayhem, pedestrian chases through bewildered-looking crowds -- and a whole lot of location shooting, which is very pleasing to a fan of Hong Kong, such as myself.

That being said, this is the first Hong Kong television series I've ever seen, I think, and so it may be old hat to many readers, and surely the location shooting may not seem special to local residents. For me, however, even with closed captioning (rather than English subtitles, which are not currently available), the series scratches my Hong Kong crime itch, and seems to do a pretty fair job of it.

This Hindi-language action-comedy is next up on my "to watch" list, based on Screen Anarchy's review by J Hurtado, who saw it in connection with the Toronto International Film Festival last year:

"The action and comedy all land in a big, goofy cavalcade of crowd pleasing moments that add up to one of the most fun experiences I've had with a film this year. "

Summing up: Yes! I will watch this for myself, as soon as I post this article.