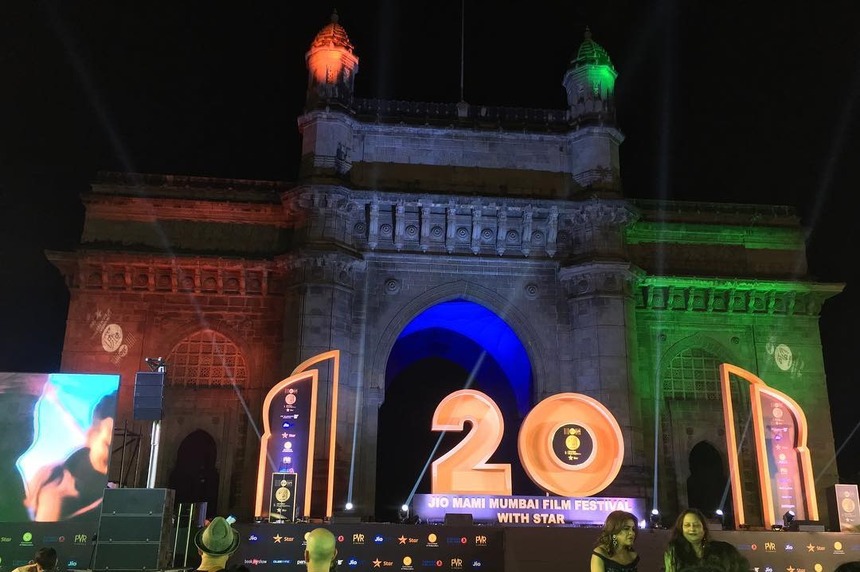 The 20th edition of Mumbai's flagship film event, Jio MAMI Mumbai Film Festival with Star, kicked off on Thursday evening with a blessedly brief, but star-studded opening ceremony at the Gateway of India in the southern part of the city. Hosted by actress Kalki Koechlin, the event was mostly an excuse for everyone to get dressed up and ogle a few key Bollywood superstars on the red carpet. Actor Aamir Khan led the charge, with others like director Rajkumar Hirani, actress Jaya Bachchan, and other members of various layers of Bollywood strata made their appearances.

It was also an opportunity for the organizers, led by critic and festival director Anupama Chopra, to address some of the controversy regarding the recently inflamed #metoo movement that has directly affected the festival in recent weeks. Chopra's reaction to the events, which have led to numerous films either being removed from the program, sometimes under dubious circumstances, or dropping out on their own, was diplomatic and apologetic to the filmgoers who might feel slighted. The response to these controversies hasn't been particularly clean and tidy, but you can feel the organizers attempting to reckon with their own choices.

Several events and panels have been arranged around the movement, which is wise since it's been impossible to ignore effects of the recent events on the tenor of the festival. There is a luncheon later today to discuss women in cinema, there is was a panel on day one discussing the impact of the #metoo movement on India, and there's even a public sounding board in the one of the main cinema halls for people to express their own thoughts/support/experiences regarding this most recent wave of accusations.

However, not every event has been saturated by this long overdue reckoning, and many people, myself included, are attempting to balance their needs with their wants and diving into a festival with an incredibly diverse slate. This being the biggest film festival in India, they choose to focus on Indian independent films every year, and this year there are no less than thirty films on the docket in three main sections along with sections for local short films and young filmmakers. In these first two days I've managed to see five films, and four of them have been from India and I'm far from through.

Opening my festival was the overwhelmingly empathetic experience of Alfonso Cuaron's Roma, a clear contender for the Best Foreign Language Oscar, presented here by Netflix with Ted Sarandos in attendance. The film is an exceptional and deeply affecting observation of a middle class Mexican family and their servants in the early '70s in a country facing many of the same political struggles we see today. The relationships between the family members and their servants and the way they all interact with the world feels very authentic, which makes sense since Cuaron has talked about how much of the film comes from his memories of his own youth.

An interesting element that makes Roma to effective here in Mumbai is the way the family depicted in the film's relationship with their help mirrors the upper class families in India. Many of these families here share a familiar dynamic with their servants, and it's not at all uncommon for middle and upper class families to have daily help that sometimes lives in. Add to that the conservative nature of traditional catholic Mexican families and upper class Hindu families in India and this is an excellent choice for the festival.

The film itself is an incredible theatrical experience, with stunning black and white photography and a surprisingly immersive Dolby Atmos sound mix that truly envelopes the audience and makes the film feel even more intimate. Netflix is going hard after the Oscar this year, and the fact that this will be their first film to get some semblance of a proper theatrical release is promising, however, the idea that an experience like Roma soon be relegated to home viewing rather than the incredible theatrical experience I got, or even a properly authored disc release, is tragic.

Next up was the opening night film, Vasan Bala's ode to action cinema and love letter to his Mumbai, The Man Who Feels No Pain, playing here under its Hindi title, Mard Ko Dard Nahi Hota. I saw this film in conjunction with Toronto's Midnight Madness where it won the audience award, but seeing it with a local audience was a revelation. The film, which follows a young man who fancies himself a martial arts vigilante and has a condition which doesn't allow him to feel pain, is a rollicking good time, custom built for this urban Mumbai audience. Many of the jokes that went over my head when viewing it solo came to life in a cinema full of Mumbaikars ready to have a good time. Star making turns from Abhimanyu Dassani, Radhika Madan, and Gulshan Devaiah lit up the screen, making this the kind of film that allows one to escape into a wonderful world of make-believe where heroes are real and they look like us, albeit with better abs.

Day two began with another pair of Indian features. First up was Bulbul Can Sing, a delicately observed tale of teenaged love, angst, and tragedy from director Rima Das, whose previous feature Village Rockstars is India's 2018 submission to the Academy Awards. After having seen both of these features, it is very clear that Das is building an aesthetic that is both immediate in terms of its ability to affect, and rough around the edges. Das' ability to mold affecting performances from non-professional actors both here and in Village Rockstars is incredible, and I see a long future for her behind the camera.

Next was one of my most anticipated features from the Indian selections, Devashish Makhija's Bhonsle. Makhija is now on his third feature, his first two having been favorites of mine from their respective releases, and with Bhonsle he stretches himself and his audience even further. Bhonsle tells the story of an aging cop forced into retirement against his will who is attempting to find meaning in a life in which the only thing he knows has been taken away from him. When factionalism begins to tear apart his chawl (apartment block), he attempts to stay out of it, but soon the terror of prejudice comes to his door and he has no choice but to face it.

Bhonsle is a study in restraint and putting faith in one's audience. It's an exceptional film bolstered by a nearly silent performance from Manoj Bajpayee, one of India's finest actors, who also stepped in to produce the film when things were looking dire during production. Bajpayee crafts a complete character from Makhija's script almost entirely through physical action, or inaction, and we manage to get a very good sense of who he is. This is the filmic equivalent of the Pixies musical trademark of loud-quiet-loud, though in reverse where long stretches of the film are dedicated to silent observation, but then punctuated with a kind of intense violence that is made all the more shocking by what happens - or doesn't - around it. Another exceptional film from Makhija.

Lastly, a scheduling/transport snafu meant that I missed an introduction and screening of One Cut of the Dead (though an informal petition to get the fest to schedule more screenings has begun on Twitter, and I'd host that, too. Get at me, MAMI). So in its place I attended a screening of Swati Dandekar's Neeli Raag (True Blue), a documentary about the history and current practice of extracting indigo dye and getting it to market. The subject was not without its fascinating elements, but the treatment was a bit dry for my tastes, and the result was an 85 minute film that I feel would've probably played better as a 30 minute PBS special. However, the festival audience around me was rapt and a lively Q & A followed which just goes to show that not every experience will hit the same notes for every viewer.

Even though I've seen fewer films than I thought I would have by now, there are still five days to go, and I plan to take full advantage. There is a masterclass with Sean Baker toward the end of the week, along with one by Lucretia Martel, and plenty of exciting screenings and events happening almost nightly. Hopefully I'll also manage to do a little sightseeing and shopping as Mumbai is one of my favorite cities and it's been a couple of years since I've been here. In short, so far, so good. Some great films, some important discussions, and a lot of potential.