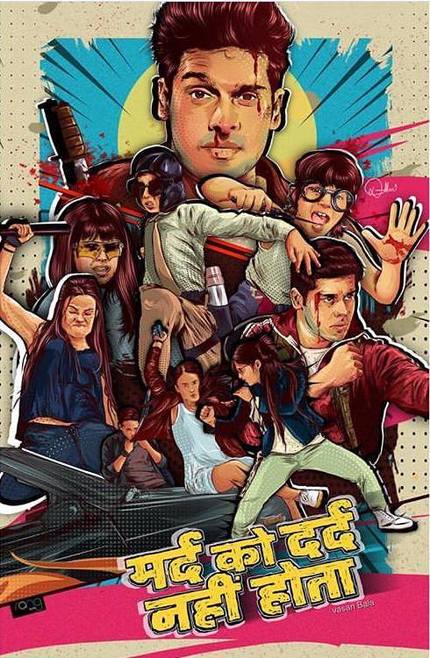 Vasan Bala's sophomore feature, The Man Who Feels No Pain (Mard Ko Dard Nahi Hota), is heading to theaters in two short weeks, and the promotions have gone into overtime. Along with a couple of nifty mini-teasers for the main characters Suriya (Abhimanyu Dassani) and Supri (Radika Madan), today the team dropped the official main trailer for Indian audiences. We featured an earlier international trailer in conjunction with the film's TIFF premiere, but now we get a piece that is notably more in line with what local audiences expect.

The Man Who Feels No Pain is the debut feature for leading man Abhimanyu Dassani, and it's a performance he's been winning plaudits for everywhere it shows, even winning an award at the International Film Festival and Awards of Macau last December. The film is not Radika Madan's first, that honor goes to Vishal Bhardwaj's Pataakha which released in cinemas around the same time as MDKNH's TIFF premiere, but she gets a solid co-lead with plenty of chances of her own to take on the bad guys with feet and fists a-flyin'.

For Bala, it is a kind of debut in that his first feature film, Peddlers, though selected as part of the International Critics Week at Cannes in 2012, never got a domestic release in India, and remains largely unseen. This will mark his first feature to get a commercial release, and it is miles away from the somber experience of Peddlers. The Man Who Feels No Pain is an all out crowd pleaser, a tone very well expressed in this new trailer. Take a look at let us know what you think.

The Man Who Feels No Pain (likely to be released internationally under its original Hindi title) comes to cinemas on March 21st.