Toronto 2018 Review: THE MAN WHO FEELS NO PAIN, A Big Screen Love Letter To All Things Action 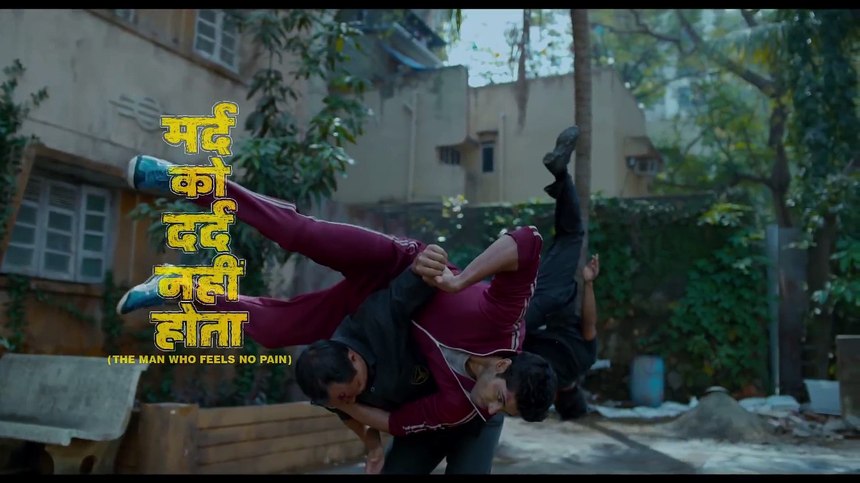 There is nothing subtle about Vasan Bala's (Peddlers) second film, The Man Who Feels No Pain. In this boisterous action comedy, Bala's passions and obsessions are writ large across the screen with a genuine affection that is hard to deny. Taking influences from his own action heroes of the '80s and '90s around the world, Bala and his solid leading cast of Abhimanyu Dasani, Radhika Madan, and Gulshan Devaiah express not only reverence for their antecedents, but also attempt to bring their own Indian flair to this lively crowd pleaser.

Surya, played as an adult by Dasani, was born with congenital insensitivity to pain, a condition which puts him in a unique and dangerous position. The disease means that he can function through almost any injury, but also ensures that he never knows when his body is in danger. His grandfather, played with prideful glee by Mahesh Manjrekar, takes it upon himself to train the young boy to keep himself safe from harm by learning to feign the pain, lest anyone think he's a freak.

Keen to take advantage of his strengths, Surya, and his young friend/crush Supri, decide that he can use his ability to "play through the pain" to become a superhero, all he needs is the talent and the willpower. He trains himself in martial arts by plowing through an enviable collection of abandoned VHS tapes (Rambo, Gymkata, Game of Death, etc...) until he stumbles upon a video of a local one-legged karate hero named Mani plowing through 100 opponents in a demonstration match. This inspires Surya to become the new Karate Man, and defeat 100 opponents of his own, but as with any impossible goal, the road is long and winding.

The Man Who Feels No Pain is a revelation in Indian action cinema, a balls out action comedy pastiche that both hews close to its Bollywood stylistic roots and at the same time extends the reach of the local art form to make it a perfect crossover project. Bala hold nothing back in paying tribute to his heroes, name checking Stallone and Bruce Lee, while also acknowledging his own countries deep affection for over the top action cinema. The combination of these elements makes for an exciting new hybrid that is both sure to be successful with those accustomed to Indian action films, but also those raised on the gonzo action of '80s and '90s Hong Kong cinema and beyond.

Abhimanyu Dasani, making his debut appearance on film here, is a revelation on screen. He exudes both the confidence and naiveté that the character of Surya requires to engage the viewer for the two hour-plus run time. And his martial arts chops on screen aren't too shabby either. Bollywood has been trying to make Van Damme-esque martial arts heroes for the last decade out of actors like Vidyut Jamwal and Tiger Shroff, but neither has been able to quite balance the amount of skill required with the kind of screen charisma that makes a an actor into a star. Dasani oozes charisma and charm, though, and his wide-eyed enthusiasm on screen goes a long way toward making The Man Who Feels No Pain work when the story goes on the odd rambling tangent.

While Dasani his flying roundhouse kicks are certainly the star, he's backed by an impressive supporting cast. Radhika Madan as Supri often matches her co-star kick for kick in action sequences and lends a bit of gravity to the absurdity of the situation. Supri is the character that grounds the film in reality when Surya's kamikaze antics threaten to spin out of control. Also incredibly impressive is the Karate Mani played by Gulshan, and... the gangster twin brother of Mani (also played by Gulshan). Gulshan also appeared in Bala's Peddlers a few years back, but his performance is a marvel of not only character work in differentiating the two feuding siblings, but also a physically impressive piece as one role is played entirely on one leg with plenty of action to accomplish.

Speaking of action, The Man Who Feels No Pain doesn't lack for it in any way. Western martial arts pros The Stunt People (Eric Jacobus and Dennis Ruel, plucked from YouTube to choreograph much of the action) deliver realistic, brutal action the kind of which Bollywood hasn't really seen. Gone are most of the obvious, physics defying wire gags that plague much of Bollywood's action, replaced by full impact face kicks. This evolution in and of itself is a monumental step forward for a mainstream Bollywood product, albeit a low budget one.

This isn't the first time India has attempted action like this, I'm reminded of the zero budget cult wonders Local Kung Fu and Local Kung Fu 2 from director/actor/writer Kenny Basumatary. However, while those films received moderate acclaim in their home state of Assam, they were very obviously made on the cheap, which definitely made sure they have stayed obscure everywhere else. The Man Who Feels No Pain might be the first film to put this kind of action on big screens not only in major cineplexes in India, but on festival screens around the world, potential leading to greater acceptance and curiosity for the form.

When it's not busy kicking your face into next Tuesday, The Man Who Feels No Pain is a big-hearted love letter to outsized action in the vein of Stephen Chow's early '90s gems. Humor is the name of the game here, and even though there is plenty of blood and a compound fracture or two, barely a scene goes by without a solid gag to remind you that we're all here to have fun. Dasani's on screen enthusiasm is the vessel for a lot of these gags, and it's what makes the film work so well. Never taking itself too seriously, The Man Who Feels No Pain zigs and zags both tonally and in terms of plot and motivation that would be confusing and deflating in less confident hands, but Bala knows exactly what he wants and he and his team deliver in spades.

While the film has great potential to break out of the Indian film ghetto that sees many of the country's finest products relegated to second run theaters with no marketing, it doesn't do it by abandoning the things that make Indian cinema great. Yes, they reference the great Asian and American action gems, but "phir bhi dil hai Hindustani" (its heart is still Indian), and Bala shares that love in small ways that will satisfy fans of the form.

The title itself - "Mard Ko Dard Nahi Hota" in Hindi - comes from a dramatic line delivered by Amitabh Bachchan in the 1985 film Mard (Macho), and significant portions of the film focus on great pulp action films from the '80s like Aaj Ka Gundaraj and Geraftaar. Interestingly, both of those films, while made for the Northern Hindi film market, featured huge stars from the Southern industries (Chiranjeevi from Telugu cinema in Aaj Ka Gundaraj and Rajinikanth and Kamal Haasan from the Tamil industry in Geraftaar), and that's just the beginning, popular songs from days gone by little the soundtrack alongside more modern scoring and an infectious rap soundtrack that could have fit just as easily behind Creed as a Bollywood film.

The Man Who Feels No Pain is a little bit long and perhaps at times convoluted, but it's mostly in the service of making the film work for its home audience and emulate those big screen action gems of Bollywood's past. However, I didn't find it boring for a single second, and the action and comedy all land in a big, goofy cavalcade of crowd pleasing moments that add up to one of the most fun experiences I've had with a film this year. Vasan Bala was a filmmaker to watch after Peddlers, but now, with The Man Who Feels No Pain, he's a confirmed talent.