Notes on Streaming: NEW YEAR, NEW YOU, Plus POOKA and More Intriguing Shows 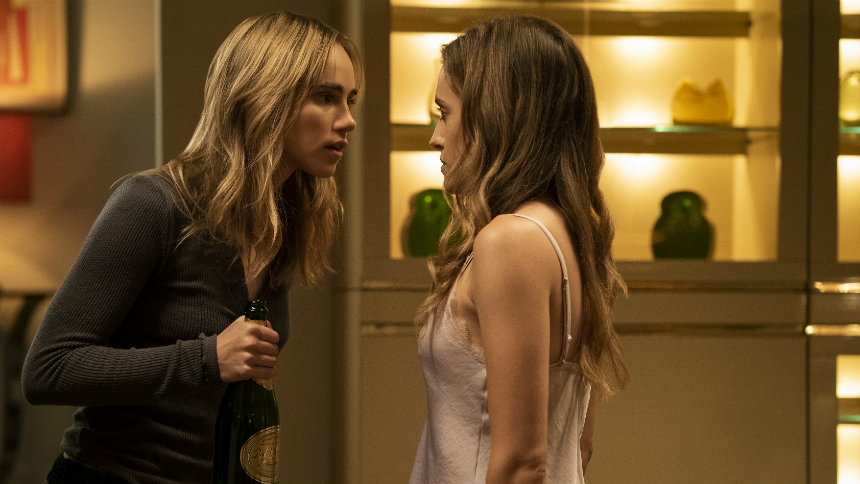 Sophia Takal's New Year, New You (pictured above) will debut on Hulu tomorrow (Friday, December 28, 2018) and it's a terrific, menacing thriller that deserves to be celebrated. Combined with Nacho Vigalondo's Pooka, the previous installment of the Into the Dark anthology series, it's reason enough to subscribe to Hulu, at least for a trial period.

Now, I confess that I've been slow to warm up to the peculiar charms of Into the Dark, which kicked off earlier this year. Each episode is tied thematically to a different holiday, just like Holidays (2016), the anthology film from XYZ Films that featured good segments from good genre filmmakers, such as Dennis Widmyer and Kevin Kolsch, Nicholas McCarthy, Sarah Adina Smith, Scott Stewart, and Adam Egypt Mortimer, plus Kevin Smith.

Blumhouse Television takes a similar concept, presenting a feature film with a twisted view on a holiday every month on the Hulu streaming service. Directed by Paul Davis, The Body began the series with a Halloween-themed episode in October that was fairly crude, which isn't my taste anymore. Its second episode, Flesh & Blood, directed by Patrick Lussier (Drive Angry), passed by me entirely, and I must catch up with it now.

Because Pooka knocked the concept out of the park. Vigalondo leverages his experience as a talented creator of very funny short films and marries that to a deceptively weird premise that resembles his previous features, which tend toward the dramatic thriller side of things (Timecrimes, Open Windows, Colossal). His sophomore feature, Extraterrestrial, aimed at a similar otherworldly vibe, but here it feels like every point hits home as things around our lead character get stranger and stranger.

Based on an original screenplay by Gerald Olson, Nyasha Hatendi gives a lively yet subdued performance as Wilson Clowes, an actor who is struggling to make ends meet. That prompts him to accept what might be described as an 'elevated entry-level job' as a corporate mascot for a new toy. Gradually, he finds himself drawn to entirely disquieting territory, and to say any more than that would spoil the surprises that are in store.

Pooka builds in power and momentum as it goes. It's thoroughly accomplished and very unexpected -- I further confess that I didn't even realize it was the latest by Vigalondo until the opening credits rolled. Try Pooka for yourself.

Pooka is now streaming on Hulu.

Happily (for the sake of variety), New Year, New You is a different beast entirely. Director Sophia Takal's first feature, Green, put an environmental, atmospheric spin on a relationship drama that was very unsettling, and she built on that tension in Always Shine, as two longtime friends slowly discovered that maybe they weren't such good friends after all; Mackenzie Davis and Caitlin FitzGerald gave terrific performances.

New Year, New You also revolves around longtime friends, although this time the inner circle has been doubled. Three friends -- Alexis (Suki Waterhouse), Chloe (Melissa Bergland), and Kayla (Kirby Howell-Baptiste -- gather to drink, reminisce and await the arrival of Danielle (Carly Chaikin), who has become a social media star and recently signed a deal for a TV show. Once Danielle arrives, the sparks begin flying in earnest, starting a fire that may consume them all.

Long before things become heated, the conversation between the women ripples and flows in an earnest uprooting of teenage rivalries and not-so-treasured memories. Sure, the old times were sometimes good, but sometimes they were just really, really rotten, and the unpredictable nature of the gathering dekes and dukes, and occasionally induces whiplash.

Takal furthers the intentional disorientation with her framing, transforming the script, written by Adam Gaines and herself, into something that is far more immediate than it might sound here. The film is compelling and unpredictable throughout.

New Year, New You will begin streaming on Hulu on Friday, December 28.

Other titles of interest, recently released on streaming services:

Dogs of Berlin: Christian Alvart (Antibodies, Pandorum) created the series and the first episode is wicked good, with a dark premise that quickly grows darker, at a whipsaw pace. Crime and corruption collude in a dank noir; I have no idea where it will go next, which is one of the things that most excites me.

Also of interest for genre fans:

Diablero: Set in modern Mexico City, b-movie bliss appears to be on offer here in this series, which introduces a demon hunter in rough and ready fashion, and quickly teams him up with a priest who is not so holy, along with a third teammate who has not so spiritual powers. Episodes appear to run from 30-40 minutes, which should make for an easy nightly tonic.

Tidelands: Maybe I wanted too much too soon from this series, which kicks off with the premise of a large, secretive, half-siren, half-human population in an area known as the Tidelands. In the first episode, that kind of gets washed out by a tale that also encompasses standard criminal exploits. Still, with a promising cast and that promising premise to explore, I'm hopeful that the remaining seven episodes will pick up and focus more on the Tidelands and its inhabitants, rather than solely the fully-human criminals.

Not quite "genre," but still quite promising:

Derry Girls: Honesty requires me to disclose that I could barely get the gist of what the young people in the series are talking about, but the spiky spunk sells it, combined with the energy of the lead players. Created and written by Lisa McGee, it follows a group of teens in Ireland in the 1990s, as they deal with the Troubles and their own peculiar troubles. The characters are infectiously funny and that makes me want to watch more.

Vanity Fair: The flip side of gentility is presented in the latest adaptation of William Makepeace Thackeray's novel. Frankly, this is not really my "thing," yet the sharp-eyed writing and the post-modern approach is very appealing, for those times when I'm in a historical drama phase. Also, Olivia Cooke's Becky Sharp is wonderfully arch, and it makes me wonder what I've missed by avoiding historical fiction adaptations in the past.

Watch it on Amazon Prime.

The wide, wonderful world of animation:

Watership Down: Featuring incredibly detailed animation, the kind where you can practically count the hours on the body of every animal, is not one of my standard prerequisites in animation, but it sure is pretty, although distracting at first. Capturing the dark mood that I enjoyed so much in the first feature adaptation in 1978, directed by Martin Rosen, the new version also showcases a bit of the bright and beautiful as well, at least in its first episode of four.

3Below: Tales of Arcadia: Guillermo del Toro cocreated and codirected the series, which is reason enough to watch it. The first episode set up a world and its rulership in very fast and furious (and confusing) fashion, which nearly kept me from watching further, but the second episode is much easier to lean into, as two siblings and their mighty guardian seek to hide out on Earth. Their all-knowing computer, Mother, is about 60 years behind modern life, however, which means the heroic trio is caught between old-fashioned customs and their own other-worldly perspective. The second episode really made me laugh, in part due to Nick Offerman's great work in voicing the mighty guardian; Tatiana Maslany and Diego Luna also voice lead roles.

Back Street Girls: Gokudols: Utterly ridiculous and shameless, as three young Yakuza members are forced to lose their members and become pop idols as punishment for their sins. This is where all that big Netflix money is going in Japan, evidently. 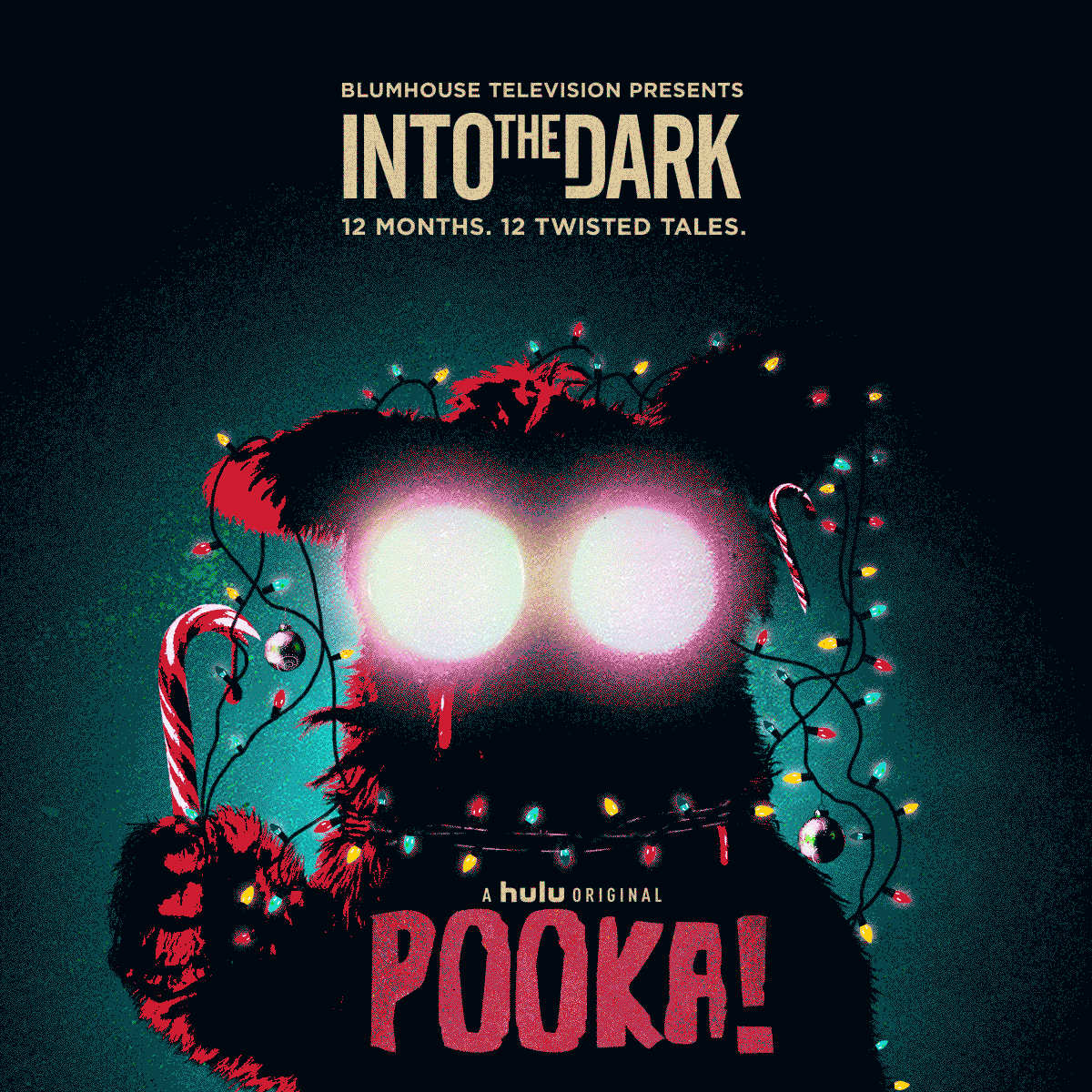 Do you feel this content is inappropriate or infringes upon your rights? Click here to report it, or see our DMCA policy.
Blumhouse TelevisionNacho VigalondoSophia Takal