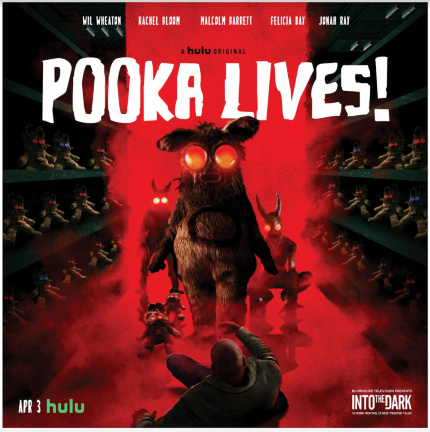 On the outside, Pooka looks quite innocent, but he inspires others to venture into entirely disquieting territory, as mapped by director Nacho Vigalondo (Colossal) in his feature-length Into the Dark episode Pooka, written by Gerald Olson. I felt that show made for exceptional viewing, "thoroughly accomplished and very unexpected," yet it certainly did not conclude on any kind of note that suggested a sequel might be forthcoming.

Via a new trailer, however, we are informed that Pooka Lives!. What may be explored in this new nightmare? "A group of thirty-something friends from high-school create their own Creepypasta about Pooka for laughs," according to the official synopsis, "but are shocked when it becomes so viral on the Internet that it actually manifests more murderous versions of the creature."

Written by Ryan Copple, this new feature-length episode is directed by Alejandro Brugués, who you might remember directed the splattery Cuban zombie comedy Juan of the Dead. Check out the trailer below, and take note that Pooka Lives! will begin streaming on Hulu on Friday, April 3, 2020.