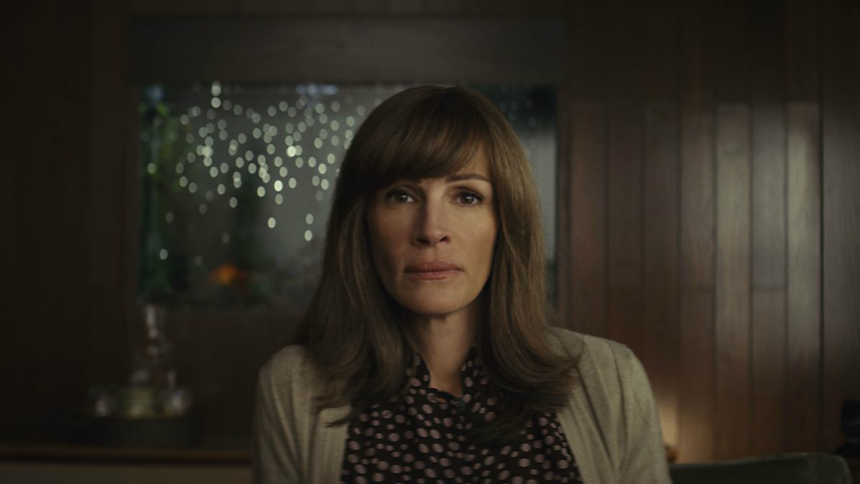 The new film by David Mackenzie, Outlaw King, is my pick of this weekend's streaming crop. Chris Pine, Florence Pugh and Aaron Taylor Johnson star; the historical battles and heated drama look impressive (watch trailer below). Mackenzie (Hell or High Water) has a good record of infusing familiar material with heat and passion, so it looks very promising.

Outlaw King begins streaming on Netflix worldwide on Friday, November 9; it will also be playing in selected theaters, so check local listings.

Julia Roberts stars in Homecoming, which is now streaming on Amazon Prime. Sam Esmail (Mr. Robot) directed all ten episodes, which run about 30 minutes each. The brevity definitely works to the advantage of the series and makes it very easy to binge, which I did over the past weekend.

What begins as intriguing drama soon morphs into compelling, occasionally thrilling drama. Micah Bloomberg and Eli Horowitz are credited as co-creators with Esmail and also wrote or co-wrote multiple episodes. The series takes place in 2022 as a dogged government investigator (Shea Whigham) evaluates a vague complaint from 2018 about a soldier (Stephan James) being held against his will at a facility in Florida.

The soldier has completed his service in the Middle East, but is suffering from Post-Traumatic Stress Syndrome, and so the six-week course of treatment at the facility is supposed to help him prepare for his return to civilian life. Early on, though, we get an inkling that all was not right, because Roberts, who was basically in charge of the facility, is now working as a waitress and denies any memory of the soldier or, in fact, any details about what went on.

The gentle twists and clever turns of the narrtive are expertly fleshed out by Esmail's imaginative direction -- watch a trailer below -- and bolstered by strong performances by Roberts, Whigham, James, and Bobby Cannavale, who plays Roberts' domineering corporate boss. Whigham and Cannavale are two of my favorite actors, which definitely added to my personal enjoyment. The series is a great weekend binge, but could also easily be enjoyed one or two episodes at a time.

The first season of House of Cards on Netflix was a watershed moment for the streaming service in 2013; I remember feverishly watching the show, barely sleeping, as the episodes sped by. Part of that was the terrific energy that director David Fincher brought to the first two episodes, which were pure popcorn pleasure.

The next season was "just as absorbing and enthralling as Season 1," in my estimation, but the magic began to go away in the following seasons. Last year, I could barely make it through the first episode: "I'm already inhaling enough toxicity in the air, thank you."

And then Kevin Spacey was exposed, which resulted in his being written out of the show completely and the focus shifting to his character's wife, played expertly by Robin Wright. The sixth and final season has now debuted, and I found it easier to watch this year. I'm sure much of that is due to a change in my viewpoint about politics.

Also: Robin Wright! Sure, she's playing a toxic character with barely any resemblance to anyone I've ever known, but that makes her nearly a comic personality, the Evil, Evil, Evil Whatever who aspires to be Shakespearen royalty yet can only rise to the level of the Burger King's Ex-Wife.

It also helps that the season is only eight episodes long; half of that is spent mourning the former president, and half is spent cleaning up the mess he left behind. I'm glad the show has run its course, even if it did hang on three seasons past its prime.

House of Cards is now streaming on Netflix worldwide.

A marvelous jumping-on point for anyone wondering about the latter days of film maverick Orson Welles, They'll Love Me When I'm Dead is framed as a 'making of' documentary about The Other Side of the Wind, which also launched on Netflix last weekend. (Here's my attempt at a review. More than that, though, it manages to summarize what made the elusive filmmaker such an elusive icon.

Director Morgan Neville has made documentaries that illuminate and entertain, not an easy combination to achieve with artistic integrity intact. (See, for example, 20 Feet From Stardom, Best of Enemies: Buckley vs. Vidal, or this year's Won't You Be My Neighbor?.) Perhaps taking inspiration from Welles and/or his film itself, Neville here makes a documentary that is its equivalent, as far as its messiness, ambitious nature is concerned.

The difference is that Neville's narrative is far more coherent. It also provides wonderful context for The Other Side of the Wind, filling in details I didn't know about (or had forgotten). All in all, it's a pleasure to watch, with rueful, present-day testimony by a string of people who were involved with the film at some point.

I saw The Other Side of the Wind first, and then this documentary, but it's so good it made me want to watch Welles' film again. If you can, it's best to watch the doc first.

They'll Love Me When I'm Dead is now available to stream on Netflix worldwide.

Do you feel this content is inappropriate or infringes upon your rights? Click here to report it, or see our DMCA policy.
Amazon PrimeJulia RobertsNetflixOrson WellesRobin Wrightstreaming

More about The Other Side of the Wind