Destroy All Monsters: HOUSE OF CARDS In American Upside-Down Land 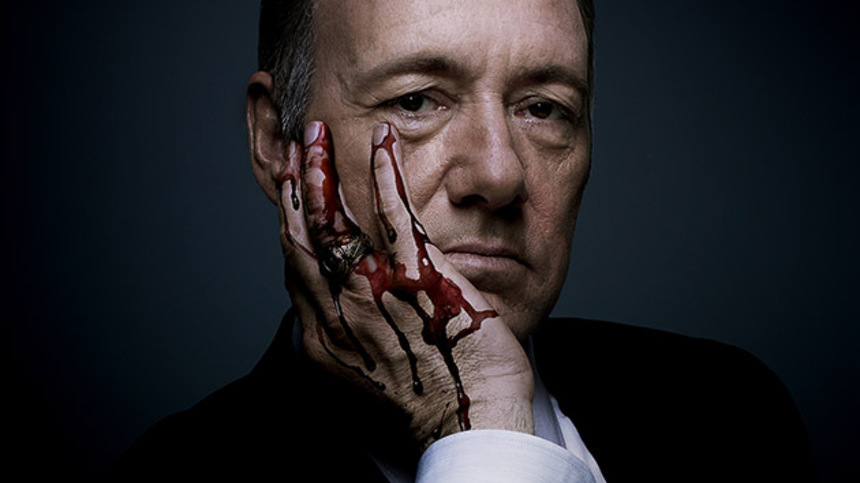 Spoilers for the fourth season of House of Cards.

Like many of you, I spent the weekend turning down the volume on the real-life political soap opera that has overtaken the United States and watched Netflix's House of Cards instead.

You have to feel sorry for House of Cards this year, a little bit: in the 3 years since the series debuted, its TV-as-novel trek through a Mirror Universe version of The West Wing where everyone's evil and nobody smiles has gone from being trashily far-fetched in its presentation of a scheming American president who is not above murdering a person here or there with his own two hands, to... I dunno... sort of tame?

When compared against what's actually going on in the U.S. right now, House of Cards certainly feels tame. Not that I suspect any of the real-life yobbos running for office this year have actually pushed any journalists in front of subways (unless Ted Cruz really is the Zodiac Killer). But after the months and months of increasingly outrageous political theatre that Trump and his cronies have given pop culture (and we would be kidding ourselves if we claimed it was anything else), nothing poor President Underwood (Kevin Spacey) could have done - short of beating his Chief of Staff to death on the steps of the Capitol while playing the bagpipes (nude) - would have been likely to compete.

House of Cards is, after all, just a drama, and dramas have rules. The 2016 pre-election garbage fire is so compelling precisely because its primary antagonist refuses to play by any. Even Underwood wouldn't be so bold.

Nonetheless, we can allow that this season, its fourth, is a substantial improvement upon the last. After a near-separation and an assassination attempt, it executes a sharp heel-turn at the season's midpoint and returns Frank and Claire to the purpose which made seasons 1 and 2 so intently watchable: gaming the system.

Even Kevin Spacey's trademark addresses to camera, which had all but vanished in Frank Underwood's first year in the Oval Office, came roaring back with a vengeance. Frank does, after all, wake up from that bullet wound with a renewed sense of his priorities and identity. It's only natural that he would return to being the exact kind of preening dick that made the start of the show so much fun.

House of Cards takes place in American upside-down land. I was thinking this as I was watching it, too. It's long stood out to many viewers that Underwood - a South Carolinian career politician and, as previously mentioned, a murdering psychopath - is a Democrat. Leave aside any questions of the popular rhetoric with respect to whether the Dems are, indeed, the Good Guys and the Republics are the First Order; allow, at least, that in most show business-related projects, liberal ideologies rule the roost, and paint the Democrats in a favourable light.

For showrunner Beau Willimon to cast his main character (and seriously evil fucker) as a Democrat seemed like a cheeky, if somewhat implausible, reversal of media convention. This season he builds on that structure by producing Frank Underwood's opposite number in the race for the fictional presidency of 2016: Will Conway (Joel Kinnaman), the Republican Party's nominee for the Oval.

If Underwood is the series' bizarro-world Evil Democrat, Conway is a fantasy baseball version of the Republicans' Obama (or Kennedy): young, hip, driving an aggressive ground game thanks to his technology connections and ability to use, and exploit, social media and Big Data.

He's no more morally solvent than Underwood, of course - in House of Cards' simple-minded, but effective, calculus, no living politician is - but he has a much greater chance of standing for the American people's corn-fed notions of Hope than any creepy old man with blood on his hands.

It was around the moment of Conway's introduction that I finally twigged to how critical House of Cards' various inversions of the American normal actually are.

If the whole presentation of the country in House of Cards is a big pineapple upside-down cake, some of its narrative choices gain bite, not to mention sharper synergies with the real world than the series tends to have. When Frank's father is outed as having a connection to the Ku Klux Klan, Underwood immediately disavows any relationship to the organization - something one real-world frontrunner couldn't be bothered with. (The episode was written and filmed months ago, so the coincidence is striking.)

Underwood goes on to lose the primary in South Carolina, his home state, anyway - because in the House of Cards fantasia, that state has a strong enough base of black voters that Underwood's tangential KKK connection is actually disruptive to his viability as a candidate. In the real world, of course, the opposite is true - and damning.

Later in the season, a family is abducted by members of the series' funhouse mirror version of the Islamic State. Called ICO, the terrorist organization on House of Cards is apparently much more inclusive in its recruitment policies: the two kidnappers are quickly revealed to be a couple of American-born white guys.

On one level I admire the fact that House of Cards cut against the grain by not having its first two Middle Eastern roles all season be those assigned to the terrorists. (Don't worry, America: an Iraqi terrorist leader turns up in the next episode.) On the other hand, the notion of a couple of white guys committing acts of terror in the name of their deep sympathy for Islamic freedom, in 2016 America, is so over-the-top ridiculous that like many of the series' other inversions, it becomes a point: of course they wouldn't.

So are we meant, at the end of the series fourth season and cruising into a fifth year which might very well involve Underwood presiding over the apocalypse (more on that in a minute), to begin to understand that House of Cards is very angry satire, masquerading as political melodrama? The palms-up facility of the basic premise - politicians are evil, man, watch how evil they are! - begins to fall away under the weight of calculated tweaks to the formula, like Claire Underwood acknowledging Frank's fourth-wall-breaking for the first time, at the very end of the last episode.

Certainly, it's not hard to imagine that the majority of the people making this series have an unabashedly liberal agenda in doing so, and are simply maneuvering the available chess pieces of their chosen dramatic milieu to supply that agenda. Or, the clean political inversions throughout the show might have an even more basic point: the system of rules is, itself, so fundamentally eroded in its effectiveness that it literally doesn't matter who's playing any more.

Now, regarding the apocalypse: the final turn of House of Cards' fourth season is one of its least subtle. With their proverbial house of cards in very real danger of tumbling down under effective attacks from within and without, Frank and Claire turn to a ginned-up war on terror to generate xenophobic fear in the United States, and thereby occlude their own wrongdoing in a reworking of George W. Bush's post-9/11 stranglehold on America.

It's more than likely that the series' next season will take place in its regular venue: a version of the normal White House that is as upside-down as the American flag in the series' logo. Part of me hopes that Willimon and his writers go absolutely bananas with it, though, to thoroughly underline their point.

Let's have a season 5 of House of Cards that sees a pustulent Frank Underwood presiding like a god-king over a fiefdom of broken American states which have long since fallen to anarchy and apocalypse. Let's see what a fictional American politician - whose sole unifying talent is his ability to consolidate power from within an old and broken system - make heads or tails of that.

Do you feel this content is inappropriate or infringes upon your rights? Click here to report it, or see our DMCA policy.
Beau WillimonHouse of CardsKevin SpaceyNetflix