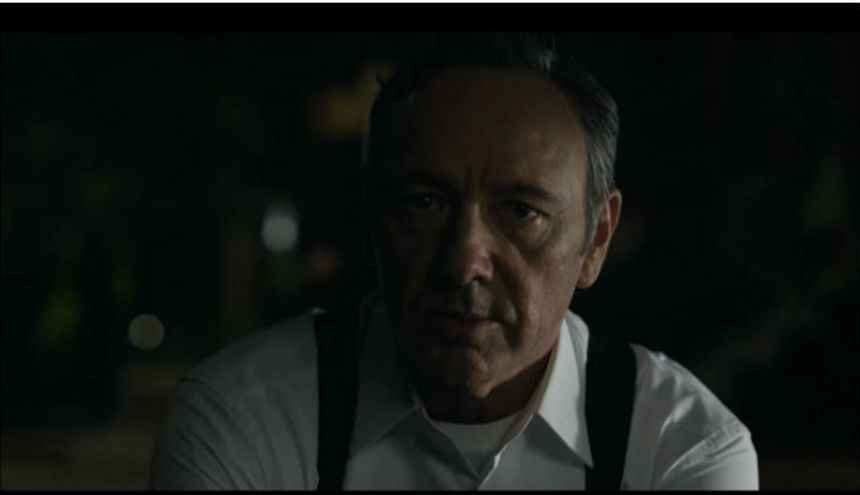 Only David Fincher could compel me to stay awake until 02:00 a.m. in order to watch the debut of House of Cards, a new original series on Netflix. I was rewarded with the sight of Kevin Spacey killing a dog in the very first scene.

Spacey plays Francis, the Majority Whip of the U.S. House of Representatives, a veteran politician from South Carolina who has been promised a nomination as Secretary of State after the Presidential election. Francis soon learns, however, that the President-Elect has other plans for him, and that prompts Francis to make plans of his own.

House of Cards, the first original show made expressly for Netflix *, is inspired by a 1990 BBC TV series that followed the machinations of a wily politician as he schemes and maneuvers his way into high office. In preparation for the new show, I watched the first episode of the BBC series, and found it to be exceptionally clever and intriguing, a great and promising set-up.

In adapting the series, Beau Willimon -- who wrote the play that served as the basis for George Clooney's The Ides of March -- has done much more than simply "Americanize" it, if the first episode is any indication for what is to follow. Francis takes advantages of Spacey's strengths, notably his facility with delivering sarcastic dialogue in a biting manner, as well as his thousand-yard stare that suggests he has taken on the weight of the universe.

Francis has thrived in the American political scene and risen to a position with a degree of prominence and power, but he hasn't done it alone. His wife Claire (Robin Wright) is clearly a more-than-capable partner; she runs a charity while harboring her own ambitions, both for herself and her husband, and she is perfectly willing to do whatever it takes to achieve her goals.

The third major player is young newspaper reporter Zoe Barnes (Kate Mara, the older sister of Rooney Mara, who of course starred in Fincher's The Girl With the Dragon Tattoo). She is terribly ambitious and, like Claire, is absolutely ready to do whatever is necessary so as to advance her career. She wants to break into political reporting, and seizes on Francis as a possible source. Francis, unhappy with the latest turn in his career, begins supplying her with information, but to what end?

The first episode packs in multiple characters, some of whom will, no doubt, remain important to the plot, but my first impression is that they're stock cliches at this point: a politician who is a scandal waiting to happen; a more experienced, resentful journalist; the President's Chief of Staff, who may be in over her head.

Willimon borrows the most startling, unnerving device from the original series -- Francis speaks directly and pithily to the camera to provide commentary and explain plot points -- while adding a different flavor to it, replacing much of the verbiage with simple looks, spread hands, or facial gestures. Spacey embodies Francis with a disdainful personality that appears expressive across a wide range of emotions, so I'm looking forward to seeing where the character, and the story, goes.

The first episode was directed by David Fincher and is recognizably in his latest style; there's something quite distinctive about his framing and compositions, and even when the plot or dialogue occasionally slides toward predictability, his visual storytelling pulls the story past the rough spots.

Netflix is making all 13 episodes of the political thriller available at the same time, a bold and/or foolish move that is targeted at those of us who indulge in binge-viewing, catching up on entire seasons in marathon sessions. Having binged my way through four seasons of Breaking Bad last summer, and three seasons of Justified barely a month ago, I can testify as to the allure and satisfaction of enjoying the complete dramatic arc of a season in a short period of time, rather than the usual unspooling of one episode per week.

Now, if you'll excuse me, I have another 12 episodes to watch.

* Correction: Lillyhammer was the first original Netflix show; also, Netflix did not originate the project, though the company did share in financing and gave the creators a two-season, 26-episode commitment.

Do you feel this content is inappropriate or infringes upon your rights? Click here to report it, or see our DMCA policy.
David FincherHouse of CardsKevin Spacey