Review: HOUSE OF CARDS, Season 3 Seeks To Consolidate Its Power 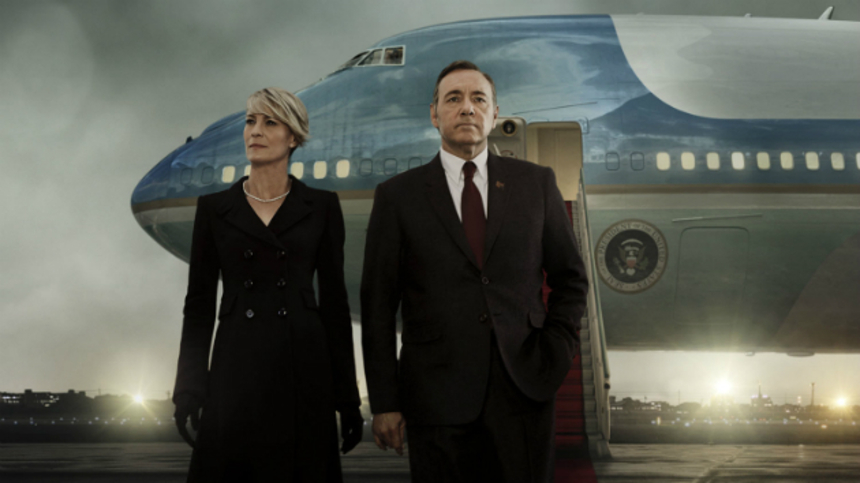 Binge-watching the third season of a show is like spending the weekend in bed with an old friend: even if you know what to expect, you still hope for a few fireworks.

Note: spoilers for the first two seasons of the U.S. version of House of Cards follow.

Having concluded its previous season with the ascension of Frank Underwood (Kevin Spacey) to the office of U.S. President, the third season appears to have nowhere to go but down, until one remembers that Frank was not elected to the office, and the 2016 presidential election is in the offing. Having worked tooth and nail to reach the highest office in the land, the ambitious and combative Frank is not likely to exit the scene without putting up a fight, and he is feverish about consolidating and expanding his authority.

His wife, Claire Underwood (Robin Wright), has long shared her husband's ambition and ruthless desire for power. Sensing that Frank's reign may be short-lived, she is eager to establish her own political identity, and she angles for a position as U.S. Ambassador to the United Nations.

Frank is aided and abetted by Remy Danton (Mahershala Ali), his chief of staff, and Seth Grayson (Derek Cecil), his communications chief. They are exceedingly calm and, frankly, rather boring; Remy's sharp edges have been sanded off, leaving behind only poignant fragments of his formerly fiery relationship with Congresswoman Jackie Sharp (Molly Parker); for her part, Jackie has positioned herself to be a key, influential player. While Remy provides dutiful service to the President, Seth chugs along beside him as a competent cog in the machine.

Heather Dunbar (Elizabeth Marvel) takes up the mantle of Frank's primary adversary; she was the chief prosecutor in the money laundering accusations that led to the resignation of President Walker in the second season of the show, and was thereafter appointed as Solicitor General. That's where she is at the beginning of the third season, but it's not long before she is tempted into the political game and serves as Frank's political foil thereafter, as both contend for the Democratic Party nomination. 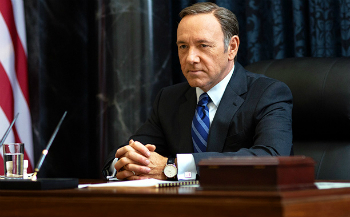 Left on the outside is Doug Stamper (Michael Kelly), who proved in the first two seasons that he was as devious a hatchet man who ever made himself essential to a man who wanted to be President. The first episode follows him as he begin to make a slow, agonizing recovery from a near-death incident; he lives and breathes politics, so when Frank rebuffs him, telling him with faux-sincerity to recuperate fully first, Doug takes it hard, and seeks a way back into the upper realms of political power.

The first two seasons of House of Cards were driven by compulsively suspenseful narratives, something that is conspiculously absent in the third season. Instead, the drama unpacks brick by brick; it's solid and sturdy, but not spectacular. Fireworks occasionally go off, but they seem more accidental than intentional, tiny explosions that spark life into individual episodes.

More so than ever, the season is built around the leading characters and the people who bring them to life. As Frank, Spacey chews the scenery with his mouth wide open; he's achieved his long-held goal and he will do anything to keep it. He's most entertaining when he loses his cool and roars like a caged lion; otherwise, he burbles and grumbles and complains. He's not much of a leader, and even his political edge has been subsumed by his overreaching selfishness.

Claire, who continually reigns in her goals so she falls in line with Frank, finds that her patience and self-control are running out. She's about 50 years of age and has spent more than half her life as Frank's "better half," a role that she long ago tired of filling. Her disagreements with Frank have begun to overshadow the things they have in common; really, they are rapidly losing respect for each other, which is steadily breaking down their relationship.

Wright etches her characterization with great care and precision; the weight that Claire feels is apparent, as is the light she can see in the distance, if only she follows a narrow path that beckons. Wright also directed two episodes, with a flair for understatement.

House of Cards remains an interesting, informed take on the architecture of political power, even if it's strayed from the stirring, audacious flourishes that marked the first two seasons. Less dynamic and absorbing, the third season nonetheless is filled with minor pleasures that reward the faithful, dogged viewer.

All three seasons of House of Cards are available to watch in the U.S. via the Netflix streaming service.

Do you feel this content is inappropriate or infringes upon your rights? Click here to report it, or see our DMCA policy.
House of CardsKevin SpaceyNetflixRobin Wright