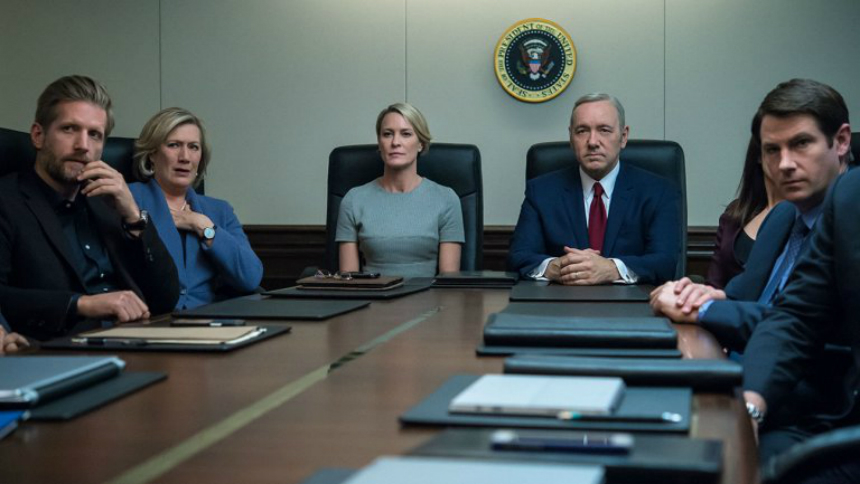 Have you checked out the new season of House of Cards on Netflix? Yeesh! Or maybe it's just me.

House of Cards, anchored by Kevin Spacey and Robin Wright as an ambitious political couple who prize power above all else, was a sensation when it debuted on Netflix in 2013. It kicked off Netflix's campaign to be the home of "binge TV," and lived up to advance notices, even beyond the first two, superlative episodes, directed by no less than David Fincher. It showcased actors such as Corey Stoll, who gave a superb performance as a politician as he slowly fell from grace.

I was completely seduced. I stayed up all night to watch that first season, drained and exhilarated at how it seemed to catch the spirit of these anxious times, in which evil threatened to overcome good and never relinquish its grip.

The series continued to hold power in its second season, though the third seasons took a dip in quality. Last year, things felt very different because of the changing political landscape in the U.S., something that our own Matt Brown analyzed expertly: "After the months and months of increasingly outrageous political theatre that Trump and his cronies have given pop culture (and we would be kidding ourselves if we claimed it was anything else), nothing poor President Underwood (Kevin Spacey) could have done - short of beating his Chief of Staff to death on the steps of the Capitol while playing the bagpipes (nude) - would have been likely to compete." He spoke fondly about the possibilities for the show in future seasons.

Now, after several months of living under a new U.S. president, I find myself strangely distanced and yet intimately aware of every step that the administration takes to reshape the country into something I don't recognize. As a result, making fun or ridiculing or satirizing The Way Things Are feels like a hollow exercise to me. I grew up largely in the 1970s, when I read as many column inches in my local newspaper (Los Angeles Times) as possible to learn about what was going on in the White House. Today, I check my Twitter feed.

So when I turn on a streaming service to watch an episodic show or a movie of some sort, choosing something that resembles in any way today's political landscape, real or imagined, is not terribly appealing.

I recognize that I need to keep up with current events, and so I watch various broadcast and cable news networks and, yes, check my Twitter feed and read articles in a variety of online publications, to get a sense of what people are thinking and doing. And I spend time worrying about the times ahead.

The latter is a snippet from Elvis Costello's angry diatribe, "Radio, Radio," which doesn't fit these circumstances exactly, but it fits my mood lately. Maybe that's why, when I started watching season 5 of House of Cards, expecting to binge through it happily as I'd done in the past four years, I could barely make it through the first episode.

I'm already inhaling enough toxicity in the air, thank you. If it's not from the news, it's from neighbors who are not neighborly or strangers who have been rubbed raw by life and never learned how to treat strangers kindly. Perhaps I'll find the evil humor in the latest season of House of Cards, the hand-rubbing, percolating brew of turmoil and trouble, to be more appealing at a later date, at least to the point that I want to watch more than one episode.

To be sure, Spacey and Wright and Michael Kelly and Joel Kinnaman and the rest of the very talented cast sizzle into their roles right away, ginning up the evil and, I suppose, anticipation for more cloudy morality and dubious, self-interested choices, all to further their personal goals and it is unnecessary and obvious. Not that it wasn't before, but the edge of dark fantasy made it somehow more enjoyable, in the same way that a horror movie that slices up a nasty character bit by bit seems satisfying and just. It's not, of course, but it can appear that way in a certain mood.

Right now, for my mood this year, House of Cards feels like a show whose time has come ... and gone, gone, gone.

House of Cards can be viewed on Netflix.

Notes on Streaming is a column of opinions about streaming services.