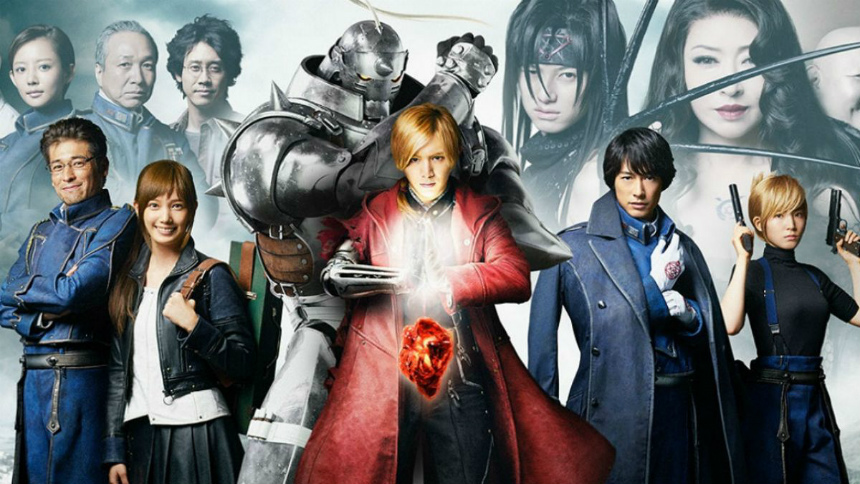 Here's one fantastic way to avoid charges of whitewashing: just don't do it.

A film adaptation of Arakawa Hiromu's Fullmetal Alchemist, directed by Sori Fumihiko, was released in Japanese theaters on December 1, 2017. Now it's arrived as a "Netflix Original" to the streaming service worldwide and it shows the folly of whitewashing characters in the vain hope of attracting bigger audiences: just don't do it.

As our own Ernesto Zelaya Miñano pointed out in his review of Adam Wingard's Death Note, which debuted on Netflix last year: "Live-action versions of animes - especially the Westernized kind - are tough to pull off, and the reason why goes beyond the dreaded 'whitewashing'. Rather, there's a huge cultural barrier to overcome; anime series and TV shows are very, very Japanese, with a sensibility all their own that's very hard to translate for a different audience (most of the time, anyway). ... Not to mention that there are some things that can only look good in animation."

That adaptation came on the (virtual) heels of Ghost in the Shell, another live-action adaptation of a well-known manga / anime property. Though it was widely criticized for whitewashing, our own Pierce Conran described it as "another win" for Scarlett Johansson and her performance, though he concluded that the film is "a visual treat showing a great deal of reverence to its source, yet it's a shame it didn't try to push its ideas further."

Without whitewashing to worry about as a distraction, Sori Fumihiko's film may inspire less inflammatory, though no less passionate debate, about its faithfulness to the source material and the quality of its live-action dramatics. First published in 2001, Hiromu's manga was ultimately collected into 27 volumes and inspired two anime series, two animated films, and now this live-action adaptation. 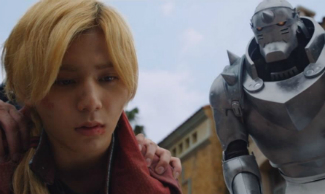 Set in an alternate timeline, where alchemy is a respected and valued science in the year 1908, Fullmetal Alchemist follows Ed and Al, two brilliant young boys who have become alchemists at an early age. When their mother dies, unexpectedly young, they are sent into an immediate tailspin. They attempt to bring her back to life via a forbidden human transmutation, but things go terribly wrong at the mystical Gate of Truth.

In their attempt, Ed loses his his left leg, while Al loses ... everything. (This is in accord with the Law of Equivalent Exchange.) Ed then gives up his right arm in exchange for Al's soul, which he seals inside a large suit of armor. The brothers embark upon a search for the (perhaps mythical) Philosopher's Stone, which they believe will enable them to bring their mother back to life and reunite Al's soul with his body.

After a time-jump of some kind, we pick up the story with Ed (Yamada Ryosuke) now known as the "fullmetal alchemist," thanks to his metal arm (and leg), designed and constructed by Winry Rockbell (Honda Tsubasa). A childhood friend, Winry accompanies Ed on his journeys -- he needs a mechanic often -- but it's clear that they have strong feelings for each other, romantic or not.

In pursuit of the Philosopher's Stone across towns and villages that are reminiscent of European settlements in the Middle Ages, Ed, Al (voiced by Mizuishi Atomu) and Winfry come across old friends, including Roy Mustang (Dean Fujioka) and family man Maes Hughes (Sato Ryuta), as well as the legendary Dr. Marcoh (Kunimura Jun) and the very mysterious, strange creatures known as Lust (Matsuyuki Yasuko), Envy (Hongo Kanata) and Gluttony (Uchiyama Shinji). And then there's General Hakuro (Kohinata Fumiyo), whose friendly, commanding presence hints at something more.

My memories of the first anime series are vague at best and that's all I have experienced of Fullmetal Alchemist before; thus, my impressions are very much those of a newbie. So even though the running time of the film runs more than two hours, I felt that I was missing things about the relationships between the characters. The set-up goes rather quickly, and I had to watch the opening scenes twice to establish it more definitely in my mind.

Still, there is this, which likely carries over from the original manga: when your mother dies, life goes to pieces. When you're young, it must be horrendous.

Those devastating feelings of loss, compounded by guilt over the loss of Al's body (?!), propels Eric forward. Because they're established in the opening scenes, the film's turn toward a lighter touch in the sequences that follow immediately afterward come as a blessed relief.

Yet they are still part of the fabric of Eric and Al's lives, so when the narrative turns darker in the course of time, it's not a surprise, nor does it feel contrived. Instead, it feels and plays as authentic; of course that's their major preoccupation! Their mother is dead! Al doesn't have a body!

As acknowledged, my viewing experience was not in any way tempered by expectations, but I'm very curious how those who are familiar with the manga feel about the various adaptations, both in the past -- the anime series, the previous films -- and the present. Comments are more than welcome.

Notes on Streaming is a column about what's new, fabulous, and not so good about various legal, online services.

Do you feel this content is inappropriate or infringes upon your rights? Click here to report it, or see our DMCA policy.
Arakawa HiromuJapanNetflixSori FumihikoYamada Ryosuke