Review: DEATH NOTE, A Boy And His Death God 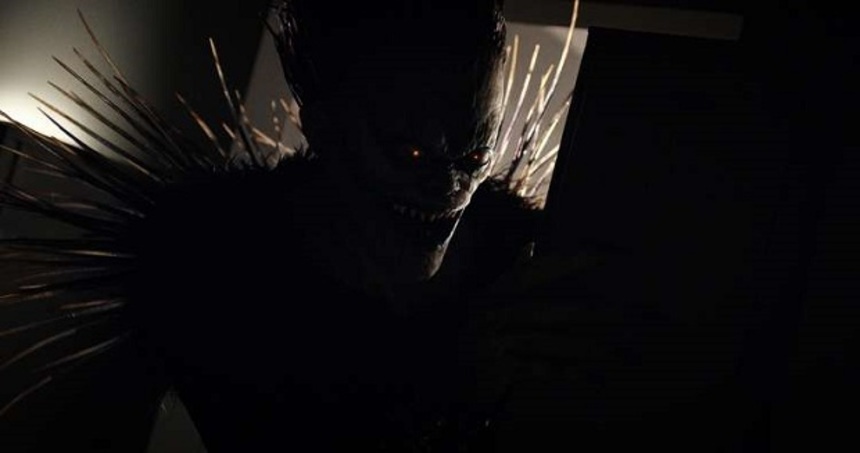 Live-action versions of animes – especially the Westernized kind – are tough to pull off, and the reason why goes beyond the dreaded “whitewashing”.

Rather, there’s a huge cultural barrier to overcome; anime series and TV shows are very, very Japanese, with a sensibility all their own that’s very hard to translate for a different audience (most of the time, anyway). Anime does things that mainstream Hollywood wouldn’t dare, especially not in this era of sanitized PG-13 blockbusters – they wouldn’t want to alienate teenagers and their wallets, after all.

Not to mention that there are some things that can only look good in animation; Dragonball: Evolution is a sad reminder of this. After trying (and mostly failing) to open Western eyes to the wonders of anime with Ghost in the Shell earlier this year, a movie that got by on pure style and not much else, Hollywood tries once again with Death Note, and it would make sense that they would hand over an off-kilter property to Adam Wingard, who up to now has mostly avoided the mainstream, at least until Godzilla vs. Kong comes along.

The setup is virtually the same: high school loner Light Turner (Nat Wolff) finds the titular Death Note, a notebook who kills whoever has his or her name written down on it. Goaded equally by a heavy metal demon named Ryuk (voiced by Willem Dafoe) and his unstable girlfriend Mia (Margaret Qualley), Light embarks on a noble Crusade to rid the world of evil, one nasty, over-the-top death at a time (also, there’s a kid in Seattle whose parents were ok with naming him "Light").

And that’s where the problems begin. This film’s tone is all over the place, with some scenes going from serious to ridiculous and back again, probably owing to the fact that what looked good in the original loses something in the translation; one isn’t sure whether to laugh or take it seriously (Wingard’s penchant for scoring scenes to 80s power ballads doesn’t help), and the tone becomes even more problematic once L shows up.

L is this film’s wild card, and the enjoyment level largely depends on one’s tolerance for his antics. A secretive genius detective tracking down Light, he's played by Lakeith Stanfield as a bundle of eccentricities and nervous tics, a guy who hides behind a hoodie, wolfs down candy by the truckload, somersaults over furniture and has his assistants sing him songs at random. He’s Sherlock Holmes by way of Hot Topic, and his backstory involving a secret society of detectives feels like it belongs in a different film.

Like most translations, Death Note is a simplified version of the original – animes hardly ever worry about holding their audience’s hand, unlike most Hollywood output – and loses a lot of its power as a result. The series’ skewed morality and concepts of right and wrong, and all the fascinating dilemmas it posits, are all treated on a surface level; even Light, who in the anime was a budding sociopath with a God complex, is turned into your everyday movie version of a mopey emo teen. This is probably the result of trying to cram an entire series in under two hours, which leads to a climax as convoluted as the Note’s seemingly endless rules.

If there’s one thing this movie gets right, it’s Ryuk. With Willem Dafoe’s demonic voice and his constant maniacal laughing, he’s a legit intimidating presence that’s mostly kept in the shadows, the Devil on Light’s shoulder; the kind of character you’d like to see more of.

Death Note is not a total wash; Wingard is too stylish and interesting a director for that to happen (yes, the synth score is here once again courtesy of Atticus and Leopold Ross, and it’s as great as expected). But this could have been more than just another thriller and it perfectly illustrates why Western versions of anime are a tricky proposition. They’re very Japanese by nature and something will inevitably get lost in translation. Let’s all hope that the upcoming Battle Angel and the long-rumoured Akira don’t fumble the ball.

Death Note is streaming on Netflix.

Do you feel this content is inappropriate or infringes upon your rights? Click here to report it, or see our DMCA policy.
Adam WingardDeath NoteNat WolffNetflixWillem Dafoe