Peter Martin
Managing Editor; Dallas, Texas (@peteramartin)
Tweet Post Submit
Mexico is in love with romantic comedies at the moment, according to Eric Ortiz Garcia, our correspondent in Mexico, and that includes the upcoming Casi Treinta and Amor de Mis Amores. He's already seen one, so he has comments on that, plus the trailers for both. He also has a Spanish-language trailer for Cantinflas, a bio-pic about the popular star.
Meanwhile, Ernesto Zelaya Minano tells us that Peru is expecting the apocalyptic comedy Japy Ending, which features a "who's who" of local celebrities. He's got the trailer, too.
Plus, just for fun: the Spanish-language poster for Guardians of the Galaxy, which releases August 1 and is pretty much the same all around the world ... 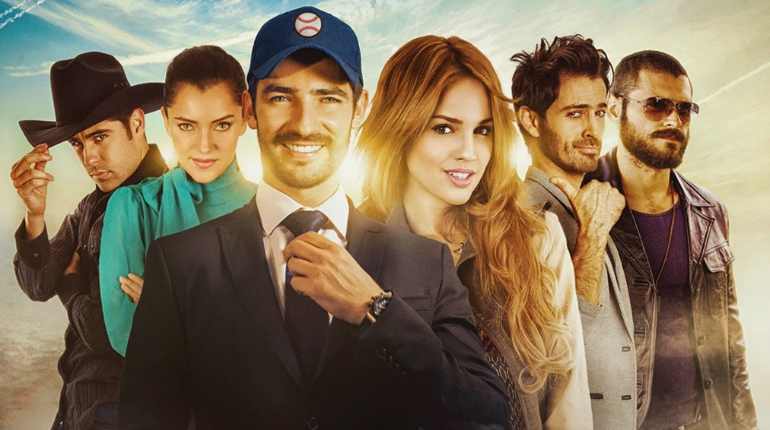 While some worthy films have surfaced within the festival circuit (i.e. The Hamsters), Mexican cinema is still having a pretty weak year at the multiplexes. And now, halfway through the year, things don’t seem to be changing one iota, with yet another two romantic comedies on their way.

Actually, I watched Almost Thirty when it world premiered at Guanajuato 2013. I wrote the following in my review: “Just like Nosotros Los Nobles, Almost Thirty features characters who are rich people. Just like any romantic comedy, this movie has two characters in love who later break up to finally meet again. It especially reminded me of the Italian rom-coms The Last Kiss and Sorry, If I Love You, where an adult man falls for a much younger woman, and where relationship' crises are explored.”

Judging only from its trailer, Amor de Mis Amores seems to be very, very similar, as both movies work around an upcoming weeding and try to explore the difficulties of love relationships.

Watch the trailer below. The film releases on September 4. 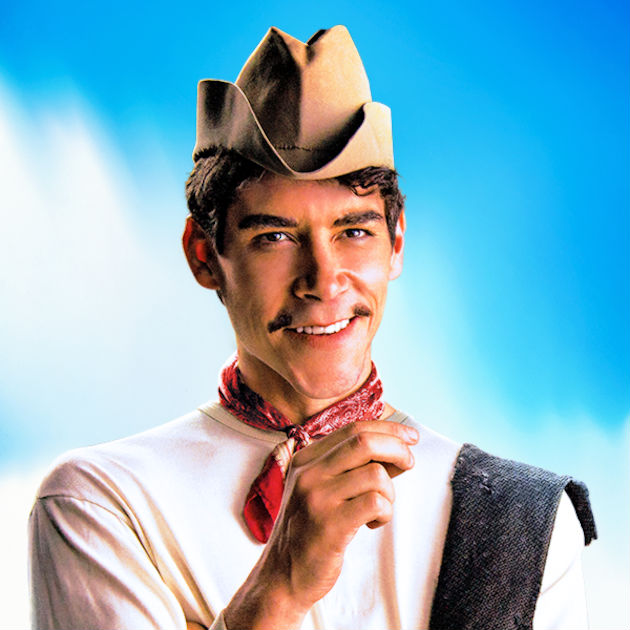 Santiago del Amo’s Cantinflas biopic world premiered back in March at the Guadalajara Film Festival, to a mixed reception from the press, and now the first Mexican trailer for it has arrived. It is different from the previous American one; here we see can see Luis Gerardo Méndez in action, as he is one of the most recognizable new faces in Mexican cinema (after the massive success of Nosotros Los Nobles). In the film, Méndez plays comedian Estanislao Shilinsky, who helped Mario Moreno (Óscar Jaenada) in the creation of the Cantinflas character. The trailer shows Shilinsky offering Moreno the chance to go to a Mexico City carpa to prove his comedy skills. And that’s the beginning of the Cantinflas legend.

Watch the Mexican trailer below (no English subtitles though), and don’t forget to check out here the American one and read J Hurtado’s great account on the world’s greatest clown.

Cantinflas hits Mexican cinemas on September 19, after its U.S. release of August 29. 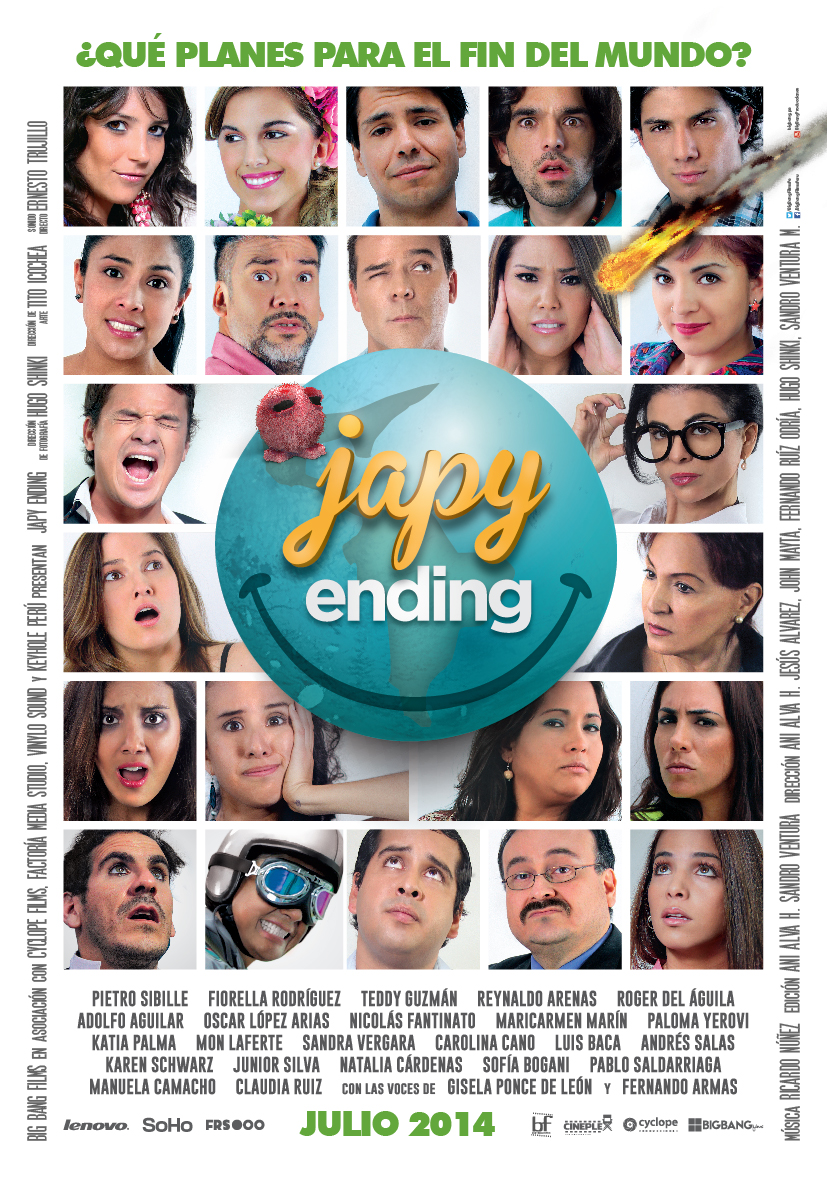 A meteorite is headed straight for Earth, and with no Bruce Willis in sight to go into space and blow it up, the people of Lima do their best to find happiness before the inevitable End. That's the premise (minus Willis) behind the new apocalyptic comedy Japy Ending.

The plot(s) include a girl waiting patiently for the love of her life to awake from a coma; a pregnant woman refusing to give birth when the world is ending; a group of teens tripping out on drugs; and a priest desperately wanting to break his vow of celibacy before it's too late. The cast is appropriately massive, including actors, comedians and TV hosts making their acting debuts; it's a who's who of local celebrities.

Check out the Japy Ending trailer below. 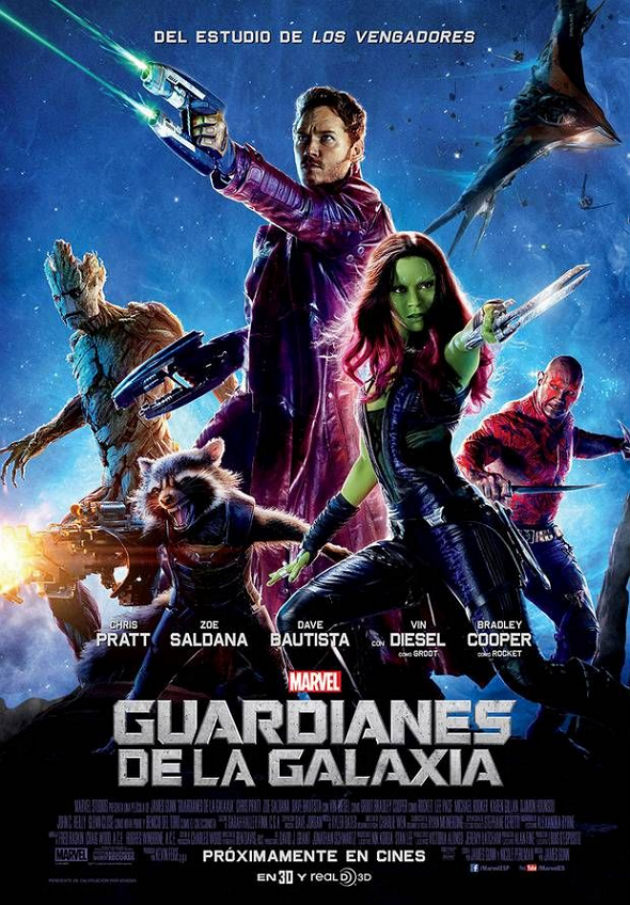 Guardians of the Galaxy

Spanish-language poster, which relies on the old stand-by: "From the studio that brought you The Avengers."