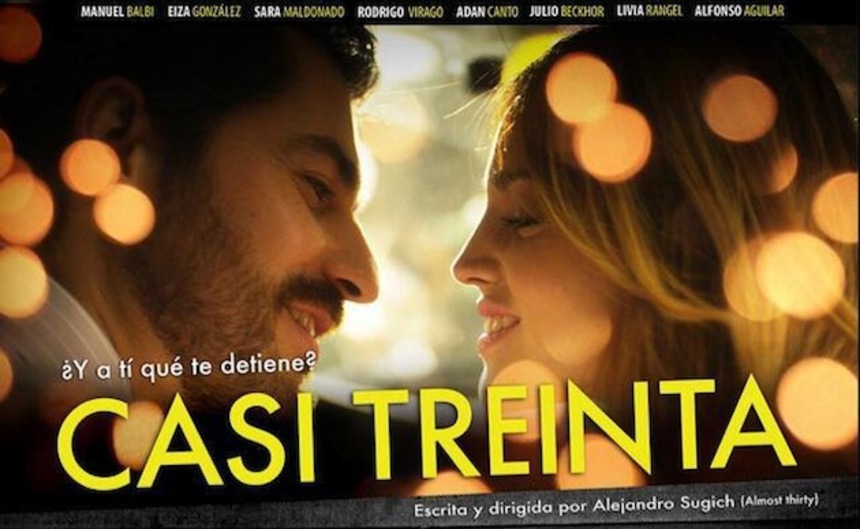 The Mexican movie Casi Treinta (Almost Thirty) had its world premiere on Sunday, July 21 at the 2013 Guanajuato International Film Festival. The director and the cast were there to walk the red carpet and introduce the film. One of the actors said, with a sort of "enough with the BS" attitude, that Casi Treinta is a commercial feature. We are here to entertain and to make money, period. So, please, do not over think. That was basically the actor's message, and while I always love a good piece of entertainment, Casi Treinta horribly fails its attempt to be that.

On the other hand, I don't see how could it be a commercial failure when it hits Mexican cinemas in October. But let's face it, Casi Treinta's target audience is the one that loves Mexican television, if not, why does a famous soccer commenter in Mexico have a cameo in the movie? It's not even funny, but most of the audience rejoiced with stuff like this.

Just like Mexico's most successful film at the box office ever, Nosotros Los Nobles, Casi Treinta features characters who are rich people. Just like any romantic comedy, this movie has two characters in love who later break up to finally meet again. It especially reminded me of the Italian rom-coms The Last Kiss and Sorry, If I Love You, where an adult man falls for a much younger woman, and where relationship' crises are explored.

In Casi Treinta, the 29-year-old protagonist Emilio (Manuel Balbi), a rich employee of an airline who wants to be a writer, finds his new love in the 18-year-old Cristina (Eiza González, weak performance). They break up because Emilio becomes absorbed by his job after he receives a promotion. Eventually, Emilio becomes engaged to a woman of his own age (Lucia, played by Sara Maldonado), but he may not be entirely satisfied. It's an "always follow your dreams to be happy" thing, with no surprises or hilarious jokes, and even truly annoying material.

One of my biggest complaints is definitely the lack of likable characters. Not only don't you care for any of them, but also you end despising these rich kids. They despise themselves, actually! To be fair, Manuel Balbi as Emilio did bring some decent humor, but you just can't buy that he's a potential writer. At some point, Casi Treinta forgets its goal: be the Mexican This Is 40. This means it wanted to be a mature take on relationships and aging, both funny and personal, something that people could indentify with. However, it feels more like a cheap, straight party movie, with Emilio and his friends going "wild," with endless amounts of cash, booze, and even some drugs.

And here comes the stuff I found kind of offensive and very dull. First of all, women should not tolerate domestic violence of any type; this movie says the opposite, and while that is clearly the sad reality in many Mexican houses, the director/writer Alejandro Sugich taking it so lightly is for sure a dumb move. I bet Sugich will say the macho, abusing character (one of Emilio's friends) fairly represents many Mexicans, but this is neither a fun parody nor a serious look at domestic violence. It just happens to be in the movie.

Casi Treinta is actually set, when it becomes a party movie, in the northern Mexican state of Sonora. Sugich is aware of the sociopolitical problems of Sonora and the rest of Mexico, but he ends up making an unsuccessful mixture. He wants to show that Sonora is a place of contrasts, sure, but he's not saying anything relevant with the images of a boat party or a pop rock band doing a performance. Sugich can stage a political dialog, or very dramatic moments, but he will always get back to the celebration, as if nothing happened.

I did observe the film's good intentions to bring freshness to the screen. The introductions of Emilio's friends are stylized and there's a scene that show us what's in the cell phone's screen (nothing as good as that cell phone issue from Fruitvale Station, though). The best stylistic resource is putting the definition of phrases only used in Sonora (or maybe in the whole north of Mexico). Casi Treinta tries to capture the essence of Sonora, but does it only shyly; for example, a scene was filmed at a baseball game since that sport is, unlike in Mexico City, a big thing there.

The people behind Casi Treinta enjoyed the fine reception with the audience at the GIFF 2013, and they will likely have a profitable near future. At the same time, I don't think anybody will remember this romantic comedy within one or two years... so enjoy while you can!