It has taken UK director Ben Wheatley just three short years to make the transition from making a living as a television gun for hire to one of the most acclaimed and intriguing feature directors not only in the UK, but in the entire world. Consider his career trajectory:

Kill List: Premieres at SXSW 2011, creating a huge stir before also moving along to the Toronto International Film Festival. A genre bender that now frequently appears on the best British horror film of all time lists.

Sightseers: Premieres to acclaim in Cannes 2012.

Though Wheatley's audience is still largely a small but vocal cult, it is clear to see what trajectory he is on. His fascination with the odd and unpredictable, coupled with his love for an unvarnished and often improvised style -- he has a marked preference for working with a stable of trusted collaborators with live theater and improv backgrounds -- make Wheatley an absolute bear for marketers to get a handle on but a joy to those who discover his work.

So what, then of his latest? Though Sightseers technically began as a job for hire with Wheatley brought on board to direct a script by stars Lowe and Oram by Edgar Wright's Big Talk Pictures, the finished project bears his distinctive stamp from start to finish. In tone it falls somewhere between his previous two works, the ultra dark humor of Down Terrace nestled side by side with the shocking violence and head trauma of Kill List. 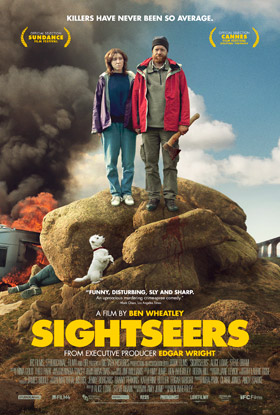 Tina and Chris are the ultimate odd couple, a socially awkward pair of misfits who have somehow discovered each other and fallen in love. This is the big moment of their relationship thus far, a cross country trip by car to visit a series of caves and oddball museums -- vintage trams and pencils among them -- across the north of England, with the nights spent in Chris' caravan. Tina has not yet gotten over the death of her dog in a tragic knitting accident. Chris has lurking anger issues. And both, as it turns out, have a taste for homicide.

Undoubtedly a smaller film than Kill List -- which could appeal to a built in horror audience -- Sightseers is no less a quality one. Lowe and Oram deliver weirdly magnetic performances while Wheatley seems to almost casually shift the tone of the film through different gears at a speed that most directors could never touch. From absurd humor -- Tina's hand-knitted lingerie -- to bursts of violence to surprising moments of genuine depth, Wheatley, Lowe and Oram take the audience on a trip as extensive as Tina and Chris' on screen odyssey.

Wheatley, thus far, has proven himself to be a director who grows by expansion. His worlds are as distinctly his own now as they were at the beginning but he continues to find new directions to travel within them. It's a trip well worth taking.

Review originally published during the Toronto International Film Festival in September 2012. Sightseers opens in limited theatrical release in the U.S. on May 10. It will become available via various Video On Demand (VOD) platforms on May 13. Check the official U.S. site for more information.