Review: MANIAC Makes No Apologies For Its Sadistic Gore 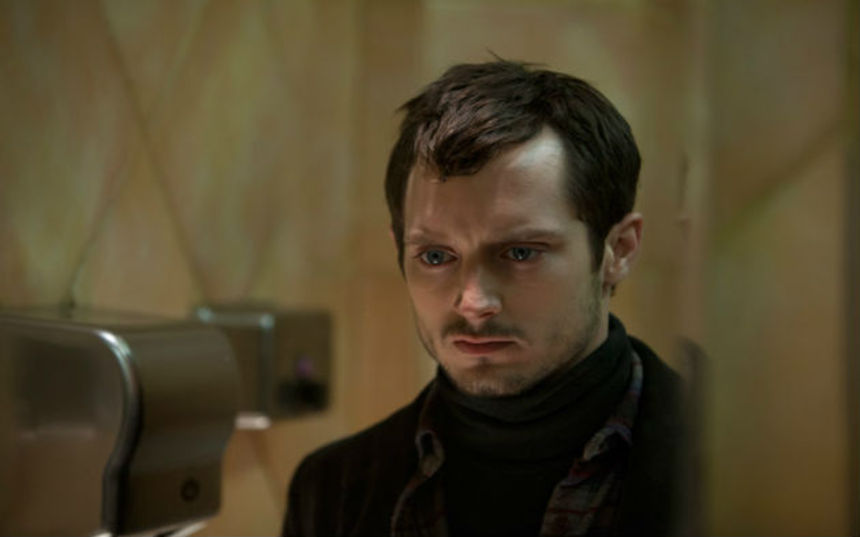 Those worried that Franck Khalfoun and Alexandre Aja's Maniac remake was going to whitewash and water down their favorite 80s sleaze classic can rest easy. This updated, Los Angeles-set story of a disturbed man cutting off the scalps of women and taking them back to his mannequin collection at home is sadistic, unapologetic, gory and extremely well-directed. It's inventive on its own terms without betraying the original, and while some may still question the need for its existence, the film is honestly much more effective than I imagined possible when I first heard about the project. In fact, maybe it's too effective -- but more on that later.

The maniac this time around is played by Elijah Wood, and while he does fine work, he doesn't match Joe Spinell in the original. I don't mean this criticism in the sense that it's hard to buy him as a pervert woman-scalper -- It's not, at least, as far as the ridiculous back story (also taken from the first film) involving a prostitute mom allows. But Spinell was compelling because, while he certainly looked like a perverted slob when he was at home alone, he turned out to be a pretty charming guy once he fell in love with the photographer played by Caroline Munroe. Well, you know, at first.

Wood also falls in love with a photographer, this time played by the beautiful French actress Nora Arnezeder, but when this happens, we really don't get to see a new side of him -- he still talks like a socially awkward, repressed weirdo. Arnezeder's character falls for him anyway though, mistaking him for a deep, introspective artist. It doesn't hurt that all her photography exhibitions revolve around mannequins, and the restoration of these "women" fill all of Wood's time not spent murdering. Their relationship actually seems fairly plausible on screen despite the absurdity of it all, but the movie would have been far creepier if it exploited Wood's harmless, boyish looks and allowed him to craft a character we could actually see ourselves falling for by accident. 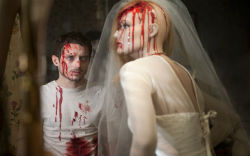 Directed by Khalfoun from a script by Grégory Levasseur, C.A. Rosenberg and Aja (who also produces), the story and structure are nearly identical to Lustig's original. This means that besides the doomed love story, most of the movie consists of women getting stalked and killed. But while the brutal, go-for-broke spirit of the original also remains, this film feels like a different beast altogether.

The major twist on the original is the fact that Khalfoun shoots the entire movie in Lady in the Lake-style first person point of view. It's a bold move, and, given the content, an incredibly inspired way to add a new twist to Lustig's original, which structured the narrative around the killer's point of view. And impressively, Khalhoun totally pulls it off, using the gimmick to build suspense effectively and create a kind of hallucinogenic, sadistic mood that actually surpasses the original in some ways. But, while the film is incredibly brutal, its aesthetics are much more slick and polished. Some scenes are kinda dazzling on a technical level, but it all feels a bit over-produced, especially given the source material. Rough content is better presented without so much visual polish.

Still, for hardcore horror fans, there's much to praise about this new Maniac, and as a bonus, the pulsing electronic score by Rob (no last name) is a nice modern nod to the synth sounds that dominated the 80s. And yet, at some point during the repeatedly sexualized images of women getting scalped (including one hilarious moment where the camera finally pulls out of POV mode so that we can see Wood more or less orgasm as he finishes someone off), I found myself wondering why the hell I was watching this movie. Despite my excitement and curiosity as to how far the film would go, I felt repulsed at times by just how many slick, gleeful scenes of violence against women were on screen. 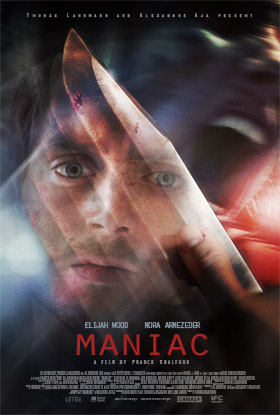 Coming to terms with this feeling wasn't easy -- a guy who has enjoyed the hell out of movies like the original Maniac and Pieces (multiple times) isn't really the one who should be getting up on a soap box to discuss responsible images of females in horror films. Thus, I went back and forth about my reaction to the film for a week. I thought back to all of the socially irredeemable, mostly misogynistic movies that have brought me so many hours of joy. I reflected that Pieces, for example, was much easier to write off as entertainment because of the charmlngly inept filmmaking and over-the-top score, which somehow made it feel self-conscious and harmless at the same time. But really, it seems arguable that it's less socially responsible for a movie that repeatedly shows women getting chainsawed to offer audiences a way to distance themselves from the images to the point of enjoyment.

To be clear about Maniac, though, we're not talking Irreversible-style brutality. The murder sequences are fetishistic, and the violence, punishing as it may be, is still stylized. Khalhoun doesn't seem too concerned with having a dialogue with the audience about the images, and the film seems directed almost solely with entertainment and shock-spectacle in mind. And why wouldn't it be? The last thing we need is a Maniac remake lecturing us about social responsibility.

Ultimately though, whether intentionally or not, Maniac's relentless first-person slaughter did a far more brutal, effective job of forcing me to question my own fascination with violence than all of the meta-layers of Cabin in the Woods or the audience-lecturing in Funny Games. And perhaps it's about time someone took this collective horror/fascination with cutting up women to its logical extreme and made a misogynistic fever nightmare out of it. Or is that just a lazy rationalization? When someone writes the inevitable masters thesis, "From Peeping Tom to Maniac (2012): The Evolution of Voyeurism, Women and The Gaze in Horror Films," send it over, and maybe I'll see with greater clarity. All that aside though, you should now have a pretty good idea whether or not this film is for you.

Review originally published during the L'Etrange Film Festival in September 2012. Maniac is currently available to watch via various Video On Demand platforms. It opens in limited theatrical release in the U.S. on Friday, June 21. Visit the official site for more information.

Do you feel this content is inappropriate or infringes upon your rights? Click here to report it, or see our DMCA policy.
Alexandre AjaElijah WoodFranck Khalfoun