Criterion in November 2022: IN THE MOOD FOR LOVE in 4K and INFERNAL AFFAIRS Trilogy Remastered 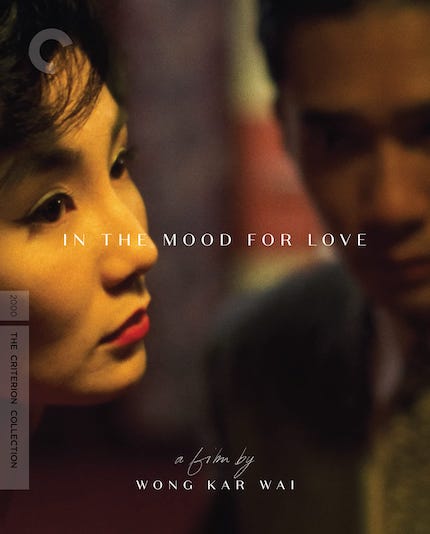 Have I died? Is this Paradise?

I say this because I (think) I just read that the Criterion Collection will be releasing Wong Kar Wai's transcendently beautiful In the Mood for Love in 4K. It doesn't really matter when (November 1, 2022), but shortly I will be selling everything I own in order to possess this masterpiece in the highest quality home edition known to man (as of now). (One more parenthetical note to myself as a reminder: somehow, buy a 4K television before November 1, but leave enough remaining in my savings account to buy the 4K version. I don't really need to eat between now and then.)

The film is one of the very few that I have gladly paid to see in a theater twice. (The second time was on a double-bill with Chungking Express, if you can believe it, at the New Beverly theater in Hollywood, long before Quentin Tarantino bought the place.) (I know I'm babbling.)

The other amazing announcement from the Criterion Collection today is that they will be releasing new 4K digital restorations of the astoundingly good and elegant Infernal Affairs trilogy on Blu-ray. Again, this brings back many happy memories of watching and savoring the original films on 35mm in a movie theater back in the day when I had much easier access to such things. I wish it was on 4K, for the sake of my future movie library, but perhaps you will not wait in order to lay your hands on this amazingly good trilogy of films. (And if you're good, perhaps I will tell you about meeting codirector Andrew Lau Wai-keung in Los Angeles and introducing him to talk about the films at AFI Fest.)

For more details, please visit the official Criterion site to place your orders and dream a little dream.

Do you feel this content is inappropriate or infringes upon your rights? Click here to report it, or see our DMCA policy.
AustraliaCriterion CollectionHong KongJane CampionSpike LeeUSWong Kar Wai

More about In The Mood For Love