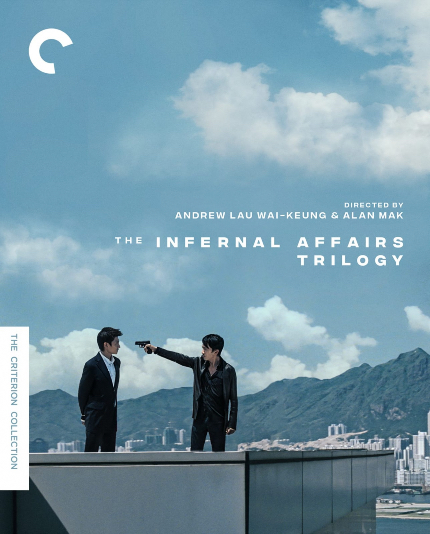 The 18th level of Hell beckons.

A magnificent opus, the three films represent a high point in world cinema.

The idea came to Alan Mak after he saw John Woo's Face/Off (1997), but no one in Hong Kong bit on his pitch for five years, when Andrew Lau was launching a new production company. Determined to distinguish his company, Lau decided that his debut production would feature a musical score performed by a symphony orchestra and that it would be recorded and released in Dolby 5.1. He also needed a completed script in advance of production, which was not always the norm in his years of Hong Kong filmmaking.

Lau liked the pitch from his friend and past collaborator, but needed a script, prompting Mak to turn his idea over to his friend and past collaborator Felix Chong, who in turn produced a first draft in five days (?!), which was all the time he had before his wedding (?!). Chong and Mak eventually completed six drafts, the script circulated, Andy Lau and Tony Leung Chiu-Wai came on board, along with Anthony Wong and Eric Tsang, and then other actors fought to join the production.

All this is related in an interview on the new Blu-ray edition of Infernal Affairs, recorded in July 2022 and released by the Criterion Collection. It's a great, 38-minute interview, in which Lau and Mak relate their backgrounds and what led up to the film. It's clear that they stil share a friendship and good memories of the experience.

The first disc also includes the 20-minute alternate ending, shot in order to meet the demands of Mainland China -- which I'd heard about and never seen before; Hong Kong Noir, recorded in 2007 and directed by Yves Montmayeur, which consists of interviews with Chong, Mak, and Lau, and also Peter Tsi, who look back on the culture of Hong Kong, ten years after the era-defining Handover; Making Of, a standard promotional featurette, with behind the scenes footage (BTS) and brief interviews, running 15 minutes; Confidential File, running 9 minutes, which has more BTS footage; outtakes, 23 minutes of raw, often silent material; and two trailers, the original theatrical and a "supercut" for the trilogy as a whole, cut by Criterion. I've only sampled the audio commentary, but it features Chong, Mak and Lau, going in-depth on the characters and themes.

I've also only sampled the audio commentary for Infernal Affairs, but it features Chong, Mak and Lau, along with some of the actors. None are identified on the disc, so it's a bit hard to pick out who's saying what, especially since they are all talking in Cantonese (with English-language subtitles). That's a subject for another time.

After the box office success of Infernal Affairs, an executive producer suggested a prequel, prompting Chong and Mak to write the screenplay, which takes place over the period from 1991 to 1997, focusing on the younger versions of the two leads. Edison Chen and Shawn Yue played the roles in the first film, and they do their best in the prequel, which also features Anthony Wong and Eric Tsang playing younger versions of their characters during the years leading up the Handover, with the very strong additions of Francis Ng as a more powerful gangster and Carina Lau as Mary, a more powerful silent gangster than her husband (Eric Tsang). Anthony Wong also shows a more ruthless, ambitious side to his police supervisor role.

The disk also features a promotional Making Of (22 minutes), which is pretty standard, with quite interesting BTS footage and interviews; Confidential File (6 minutes), more BTS footage; deleted scenes (four, totaling more than 9 minutes); and bloopers (2 minutes); along with a trailer touting its October 2003 release date.

Infernal Affairs III brings back Tony Leung and Andy Lau, following Leung in the six months leading up to the first film, extending Kelly Chan's role as psychiatrist Dr. Lam especially, and also following Andy Lau in the months after the events in the first film, as deals with new obstacles to his survival, in the persons of police supervisor Leon Lai and Mainland gangster Chen Daoming.

The features on the disk are more spartan, but we get to hear the filmmakers and leading actors in interviews conducted by Fred Ambroisine (16 min.), recorded at the time of release. Also included is a standard, promotional Making Of (12 minutes), featuring BTS footage and brief interviews; and the original theatrical trailer, touting its release in December 2003.

A note on all three films: these are gritty, soulful dramas, shot on the streets of Hong Kong, often at night with natural light. All three are 4K digital restorations with 5.1 surround DTS-HD Master Audio soundtracks; they certain don't look slick or shiny. Yet this is as good as I've seen them since the original theatrical release, enabling the close-up shots to peer into the souls of the actors, and the sound is also crisp and clear.

Summing up: As it happens, these three films were released during the height of my initial personal acquaintance with Hong Kong cinema, and set a very high standard. I also had a chance to meet and talk a bit with producer and director Andrew Lau Wai-Keung, who was a live-wire and very friendly, when he came to introduce the films at AFI Fest in Los Angeles at the time of the original release.

Do not delay on the opportunity to own your very own personal copy of these essential films. I have watched them multiple times over the years, and each time I watch the trilogy, a different one emerges as my favorite. I look forward to my new favorite, the next time I watch the films, which will be as soon as possible!