The World of Wong Kar Wai steps into UHD and, surprise surprise, it looks fantastic. 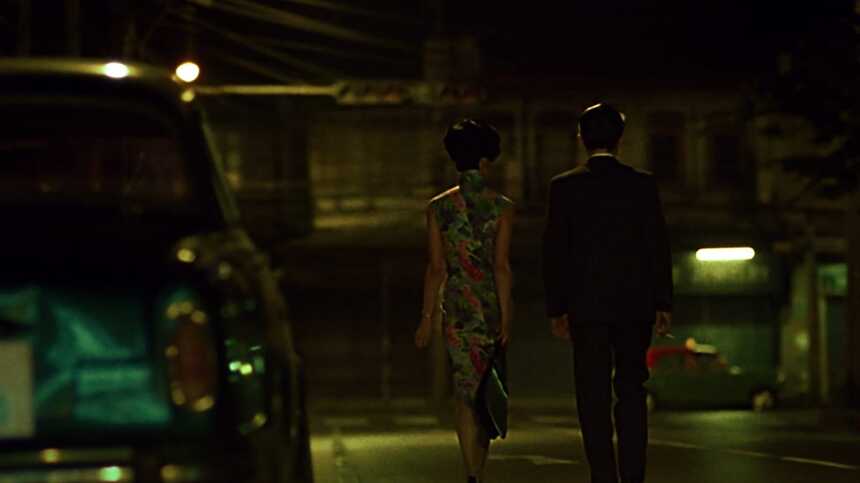 A man and a woman brush past one another in a hallway. They are renting neighbouring apartments in Hong Kong, circa 1962. He is Mr. Chow and his wife works late; she is Mrs. Chan and her husband travels for work.

They circle one another and the movie circles them; staccato, impressionist scenes giving way to waltz-like, slow motion studies of caught glances and growing familiarities. At some point, it becomes clear to both Mr. Chow and Mrs. Chan that their partners are cheating on them, and that they are doing it with one another -- a nauseatingly intimate bond between strangers.

They begin to play-act imagined scenes from their spouses' indiscretion with one another. The film leans playfully into cinematic form -- multiple "takes" of an argument, to calibrate the performance, to get closer to the anguish of the thing -- while withdrawing from it everywhere else. Wong is not even attempting to cover an entire narrative here, preferring to elide story in favour of detail. Scenes are focused on tiny gestures and details, but the story mechanics of getting into and out of them is left in the Avid.

His camera strategy is similar: we see Mrs. Chan and Mr. Chow in doorways, under awnings, faces quarter-turned to camera. They could be the only two people in this world. Played by Tony Leung Chiu Wai and Maggie Cheung Man Yuk, both actors are stunning and Wong Kar Wai knows it, doting on their hair, their eyes, their exquisite costumes. (There is a gown of Mrs. Chan's whose base colour and sheen colour let it straddle the film's red/green colour palette as Cheung turns towards or away from the light, a nifty cinematic trick that had me gasping.)

A handful of supporting characters may occasionally appear onscreen with one or the other of lovelorn pair, but an equal number -- notably, the adulterous spouses -- never appear on camera at all, becoming off-camera voices, eyelines from across a set, dialogue intoned across telephone lines. Again, Mrs. Chan and Mr. Chow might exist in a world on their own, as the embarrassing and mournful bond connecting them becomes a cherished, prideful kind of love that neither can let themselves give way to.

Very near the end of the film, an intertitle underlines Mr. Chow's recollections of his time with Mrs. Chan as blurred, indistinct, a memory he can see vaguely in his mind's eye, as through a mullioned window. It retroactively rounds off the film we've just watched, and its dreamy longing for a complete picture that never arrived.

In The Mood For Love is the first individual release from Criterion's 2021 The World of Wong Kar Wai boxed set (which Izzy reviewed here), upgrading the picture to 4K and including the same set of featurettes that supported the feature in the original collection. (Even those were original vintage, including a 2000 Toronto International Film Festival press conference and some contemporaneous videos and documentaries; the newest supplement on the disc is from 2012.)

ITMFL was originally released by Criterion as spine #147 all the way back in 2002, and the new jacket carries that 20-year-old stamp, meaning by-spine-number shelvers like me are going to have to push everything after it down the line.

Of note to home theatre purists: the film has not had HDR applied, and is a rare instance of a Criterion 4K that doesn't have the Dolby Vision stamp on the back. Wong Kar Wai opted to have the film finished in SDR instead, preferring the look. (Some info from Reddit here.)

I doubt any viewer will miss the HDR; the rich, supple contrast of the 4K image almost pulls you into your television set. (This isn't a metaphor; some early shots are so lifelike that I almost felt myself swooning forward as I watched.) This is a sublime, reference-quality presentation, and lets you sink into Wong's colour palette like a velvet armchair.

Of further note to Wong Kar Wai purists: notably, when completing these restorations in 2020, Wong Kar Wai tinkered with them. While never going full George Lucas, I'm always leery of notes, such as that on the Criterion jacket about this restoration, referring to new foley and sound effects added (to fill out the 5.1 surround mix) and the potentially subtle, potentially less-subtle changes this can make to the overall experience -- especially for a label like Criterion, whose bread and butter is ostensibly the preservation of classics for their milestone quality in the year in which they were made.

In the case of In The Mood For Love, some changes to the gradation were made, and the aspect ratio was fattened out to the original theatrical version of 1.66:1. I like the latter change quite a bit; the verticality serves the image construction flawlessly, and enhances that near-vertigo sense of immersion I mentioned above.

In The Mood For Love is the sort of cineaste wet dream you only get to see for the first time once, and if this 4K is your road in for that, kudos. (If you turned up specifically because of the WKW sequences in Everything Everywhere All At Once, double kudos!) You are going to have an absorbing time, and then watch it again, and again, and again.

In the Mood for Love

More about In The Mood For Love