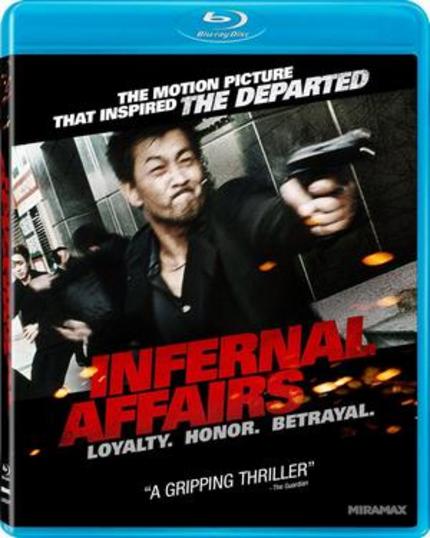 This is definitely welcome news from Lionsgate, who are knocking it out of the park lately with Blu-ray announcements. Today's good news from LG comes in the form of a Blu-ray release of Andrew Lau's Infernal Affairs coming on November 15th.  This film already has a Hong Kong Blu-ray along with it's sequels, but those HK discs are pretty pricey and the quality on catalog titles like this is always a crapshoot.  I'd be willing to wager than this Lionsgate disc will be at least as good as that one, plus with the LG we'll get subtitles bonus features, including behind the scenes footage and more.

Infernal Affairs was initially released on DVD years ago to very little fanfare, and eventually ended up bundled in a Dragon Dynasty box set with the sequels.  However, with Miramax selling their catalog to Lionsgate for home video, we may not see matching releases of parts 2 and 3 for a while.  In any case, here are the details for the upcoming Blu-ray release:

The gritty crime thriller that served as inspiration for The Departed makes its high-definition debut as Lionsgate releases Infernal Affairs on Blu-ray Disc. Honored with seven top prizes at the Hong Kong Film Awards, including Best Picture, the film stars international sensation Tony Leung ( Hero ). The Blu-ray Disc comes packed with bonus materials including a mind-bending alternate ending, a behind-the-scenes featurette and a "making of" featurette plus international trailers.

A tough veteran cop (Leung) is sent undercover to infiltrate a notorious crime ring, The Triad. Having done this work before, he thinks he's in for a routine mission until he discovers that the leader of the Triad has planted a mole in the police department. A bad situation turns deadly as the two cops compete in the ultimate battle of will.