Now Streaming: A NASTY PIECE OF WORK Takes INTO THE DARK Home for a Comic Break 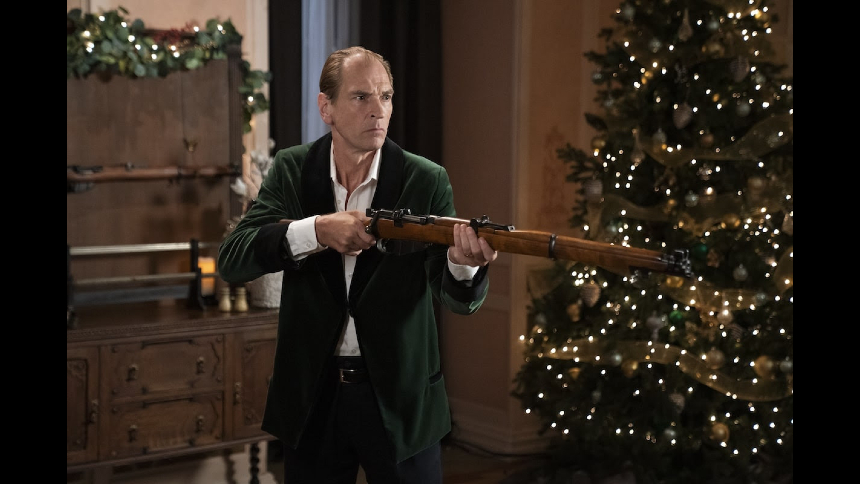 Desperation makes ambitious men do very strange things. But the women are the ones to watch.

Into the Dark: A Nasty Piece of Work
Streaming on Hulu as of Friday, December 6, 2019.

As Into the Dark, a monthly feature-film series from Blumhouse Television Productions, enters its second season of holiday-themed horror movies, comparisons between seasons becomes inevitable.

To wit, Pooka, Nacho Vigalondo's Christmas-themed episode last year, showed that flair and imagination need not be hemmed in by holiday expectations. (More on that here, including notes on Sophia Takal's compelling and unpredictable New Year, New You. Of course, Takal will also provide Christmas competition through her new version of Black Christmas, which will soon hit theaters in wide release.)

While Pooka made oddball references to the holiday -- it was more about dark impulses inspired by gift-giving than anything else -- A Nasty Piece of Work is more conventionally centered on traditional customs. Naturally, those customs are twisted far out of shape by the broader comic instincts of writer Paul Soter. Best known as a member of the Broken Lizard comedy group, Soter also wrote and directed Dark Circles (2013), a horror thriller that reportedly keeps comedy out of the equation. (I haven't seen it yet.)

From the outset, however, A Nasty Piece of Work manifests a dry, bitter, darkly comic sensibility, as Ted (Kyle Howard), an ambitious, mid-level officer worker is pitted against Gavin, another ambitious, mid-level office worker (Dustin Mulligan) in competition for a promised executive position at a private-equity firm. The former considers himself a decent man who is reaching his final straw, while the latter is constantly bestowing kisses upon his boss' posterior.

Obviously, both men are quite desperate. Their respective approaches to potential upward mobility are put to the test by Stephen Essex (Julian Sands), the company's haughty, ruthless leader, who hints at imminent downsizing at the firm. He invites Ted, Gavin, and their wives Tatum (Angela Sarafyan) and Missy (Natalie Hall), respectively, to his massive mansion, where he and his wife Kiwi (Molly Hagan) bicker, battle, and cackle with absolutely no hesitation in front of the hapless underlings.

It's all a test of sorts, a showdown to see how far each of the men is willing to go in order to achieve traditional corporate success. From all appearances, that has nothing to do with noble dreams, or anything like that; they're not looking for ways to make the lives of other people better, they just want to make more money so they can enjoy more comfortable lives.

The shallow motivations of the characters are fitting for a comedy of risible desperation. It's all meant to be quite ridiculous and maliciously embarrassing for the men, a means for the top dog (Sands) to glory in his own supposed, imagined superiority. Sands is breezily charming, smugly confident, and hideously loathsome in equal measure in the role.

As far as those themes go, A Nasty Piece of Work is enjoyably silly and watchably inventive. Charles Hood directs with a sharp sense of timing. Where the show merits further, deserved attention, though, is in the superior performances by the female half of the six-hander.

Molly Hagan brings a weary endurance in her soul to the "bored, wealthy" aspects of a woman who declines to be nothing more than a matron to her oft-repellant husband. Angela Sarafyan, who manifested a desperate-waif quality on TV's Westworld, exudes the air of a woman demonstrating undeserved charity by supporting her lesser being of a husband. Natalie Hall, who was captivating and better than the material in Dennis Iliadis' sci-fi horror flick +1 (my review from SXSW 2013), sinks her teeth into the comic shadings of her "dumb blonde" stereotype of a character, while also capturing the genuine depth of emotions that lie beneath the surface.

The film made me laugh, smile and reflect to a reasonable measure, which is as much as might be expected from a holiday-themed "horror" movie that eschews extreme interpersonal violence, instead showcasing the utter foolishness of trying to climb the corporate executive ladder in a rigged world.

Summing up: Come for the dumb men fighting, stay for the smart women elevating.